Sulfur is the sixth most abundant element on Earth and plays a key role in many geological and biological processes. A French-German team (1) including CNRS and the Université Paul Sabatier has identified, on the basis of laboratory measurements, a novel form of sulfur present in geological fluids: the S3(-) ion. The discovery calls existing theories about the geological transport of sulfur into question, and could provide ways of identifying new deposits of precious metals such as gold and copper. These findings are published in the 25 February 2011 issue of the journal Science.

Artistic rendering of the molecule S3 (-) in a diamond anvil cell. This form of sulfur is probably one of the key factors for the formation of gold deposits and copper (represented by a picture of career operating on the bottom of the image) 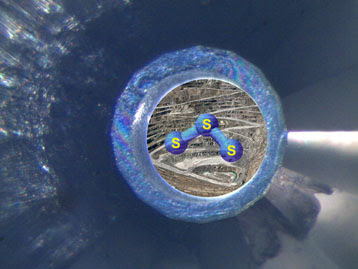 Until now, geochemists believed that inside the Earth, only two forms of molecules contained sulfur: sulfides (based on H2S or S(2-)) and sulfates (based on H2SO4 or SO4(2-)). Yet they had no way of directly plunging a probe into the hydrothermal fluids (2) that flow through rocks to verify this theory.

To get round this problem and test their hypothesis, the French-German team first created fluids similar to those in the Earth's crust and mantle, i.e. aqueous solutions containing elementary sulfur (S) and thiosulfates (molecules containing the S2O3(2−) ion). They then used a diamond anvil cell to bring the fluids to the temperatures and pressures found at depths of several kilometers (several hundred degrees and tens of thousands of atmospheres).

The researchers used an optical method known as Raman spectroscopy to identify the chemical species, and they were astounded to discover not two, but three forms of sulfur, the third being the trisulfur ion S3(-). This was a double surprise: although S3(-) was already known to chemists (it is found in sulfur-containing silicate glass and ultramarine pigments for instance), it had never been observed in an aqueous solution.

The detection of S3(-) during these experiments means that sulfur must be considerably more mobile in hydrothermal fluids in the Earth's crust than was previously thought. This is because, unlike sulfides and sulfates, which attach to minerals as soon as they appear in fluids, S3(-) proves to be extremely stable in the aqueous phase. In other words, below ground these ions must flow for long distances in dissolved form, taking with them the noble metals to which they may be bound. This chemical species may therefore be the main metal transporting agent in two major types of gold and copper deposits: Archaean greenstone belts (3) and subduction zone magmas.

This discovery could provide additional indicators in the search for new deposits, by helping geologists to identify the pathways along which metals travel prior to forming veins. In addition, the presence of S3(-) in hydrothermal fluids could affect sulfur isotope fractionation models (a sort of equivalent to the carbon-14 dating technique), which until now have taken no account of this chemical species. These new findings could for instance help scientists to find out more about the geological conditions in the Earth's crust and on its surface shortly after the appearance of life.

(1) Laboratoire 'Géosciences Environnement Toulouse' (CNRS/Université Paul Sabatier/IRD) and Bayerisches Geoinstitut/University of Bayreuth.
(2) A hydrothermal fluid is a natural hot, aqueous fluid whose temperature usually exceeds 100°C.
(3) These rocks formed during the Archaean era, between –4 and -2.5 billion years ago.