Inexpensive hydrogen for automotive or jet fuel may be possible by mimicking photosynthesis, according to a Penn State materials chemist, but a number of problems need to be solved first.

"We are focused on the hardest way to make fuel," said Thomas Mallouk, Evan Pugh Professor of Materials Chemistry and Physics. "We are creating an artificial system that mimics photosynthesis, but it will be practical only when it is as cheap as gasoline or jet fuel."

Splitting water into hydrogen and oxygen can be done in a variety of ways, but most are heavily energy intensive. The resultant hydrogen, which can be used to fuel vehicles or converted into a variety of hydrocarbons, inevitably costs more than existing fossil-based fuels.

Overview of cycle between autotrophs and heterotrophs. Photosynthesis is the main means by which plants, algae and many bacteria produce organic compounds and oxygen from carbon dioxide and water (green arrow). 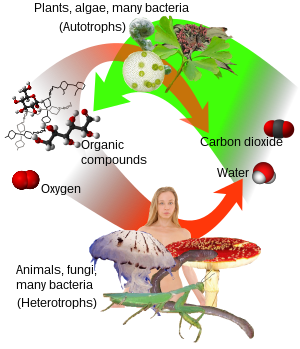 While some researchers have used solar cells to make electricity or use concentrated solar heat to split water, Mallouk's process uses the energy in blue light directly. So far, it is much less efficient than other solar energy conversion technologies.

The key to direct conversion is electrons. Like the dyes that naturally occur in plants, inorganic dyes absorb sunlight and the energy kicks out an electron. Left on its own, the electron would recombine creating heat, but if the electrons can be channeled -- molecule to molecule -- far enough away from where they originate, the electrons can reach the catalyst and split the hydrogen from the oxygen in water.

"Currently, we are getting only 2 to 3 percent yield of hydrogen," Mallouk told attendees today (Feb. 19) at the annual meeting of the American Association for the Advancement of Science. "For systems like this to be useful, we will need to get closer to 100 percent," he added.

But recombination of electrons is not the only problem with the process. The oxygen-evolving end of the system is a chemical wrecking ball and this means the lifetime of the system is currently limited to a few hours.

"The oxygen side of the cell is making a strong oxidizing agent and the molecules near can be oxidized," said Mallouk. "Natural photosynthesis has the same problem, but it has a self-repair mechanism that periodically replaces the oxygen-evolving complex and the protein molecules around it."

So far, the researchers do not have a fix for the oxidation, so their catalysts and other molecules used in the cell structure eventually degrade, limiting the life of the solar fuel cell.

Currently, the researchers are using only blue light, but would like to use the entire visible spectrum from the sun. They are also using expensive components – a titanium oxide electrode, a platinum dark electrode and iridium oxide catalyst. Substitutions for these are necessary, and other researchers are working on solutions. A Massachusetts Institute of Technology group is investigating cobalt and nickel catalysts, and at Yale University and Princeton University they are investigating manganese.

"Cobalt and nickel don't work as well as iridium, but they aren't bad," said Mallouk. "The cobalt work is spreading to other institutions as well."

While the designed structure of the fuel cell directs many of the electrons to the catalyst, most of them still recombine, giving over their energy to heat rather than chemical bond breaking. The manganese catalysts in photosystem II -- the photosynthesis system by which plants, algae and photosynthetic bacteria evolve oxygen -- are just as slow as ours, said Mallouk. Photosystem II works efficiently by using an electron mediator molecule to make sure there is always an electron available for the dye molecule once it passes its current electron to the next molecule in the chain.

"We could slow down major recombination in the artificial system in the same way," said Mallouk. "Electron transfer from the mediator to the dye would effectively outrun the recombination reaction."

Currently the system uses only one photon at a time, but a two-photon system, while more complicated, would be more effective in using the full spectrum of sunlight.

Mallouk's main goal now is to track all the energy pathways in his cell to understand the kinetics. Once he knows this, he can model the cells and adjust portions to decrease energy loss and increase efficiency.