Space shuttle Discovery has reached orbit and is on its way to the International Space Station. "Good to be here," Discovery Commander Steve Lindsey radioed soon after the three main engines shut off and the external fuel tank was jettisoned. The official launch time was 4:53 p.m. EST. 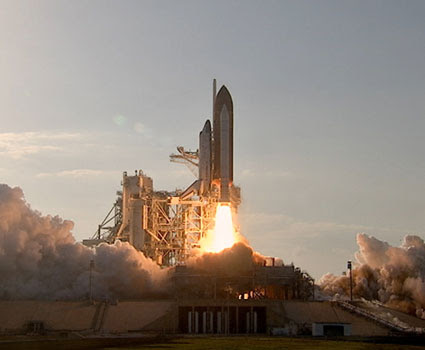 During space shuttle Discovery's final spaceflight, the STS-133 crew members will take important spare parts to the International Space Station along with the Express Logistics Carrier-4.

Steve Bowen replaced Tim Kopra as Mission Specialist 2 following a bicycle injury on Jan. 15 that prohibited Kopra from supporting the launch window. Bowen last flew on Atlantis in May 2010 as part of the STS-132 crew. Flying on the STS-133 mission will make Bowen the first astronaut ever to fly on consecutive missions.
Robonaut 2 surpasses previous dexterous humanoid robots in strength, yet it is safe enough to work side-by-side with humans. 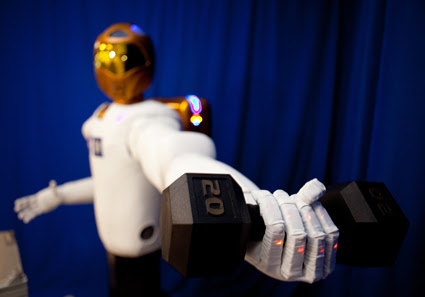 Almost 200 people from 15 countries have visited the International Space Station, but the orbiting complex has so far only ever had human crew members – until now.

Robonaut 2, the latest generation of the Robonaut astronaut helpers, is set to launch to the space station aboard space shuttle Discovery on the STS-133 mission. It will be the first humanoid robot in space, and although its primary job for now is teaching engineers how dexterous robots behave in space, the hope is that through upgrades and advancements, it could one day venture outside the station to help spacewalkers make repairs or additions to the station or perform scientific work.

R2, as the robot is called, will launch inside the Leonardo Permanent Multipurpose Module, which will be packed with supplies and equipment for the station and then installed permanently on the Unity node. Once R2 is unpacked – likely several months after it arrives – it will initially be operated inside the Destiny laboratory for operational testing, but over time both its territory and its applications could expand. There are no plans to return R2 to Earth.

NASA will launch the first human-like robot to space this year to become a permanent resident of the International Space Station. Robonaut 2, or R2, was developed jointly by NASA and General Motors under a cooperative agreement to develop a robotic assistant that can work alongside humans, whether they are astronauts in space or workers at GM manufacturing plants on Earth.