The Foggy Past and Disappearing People of the Kuril Islands: Exploring The Limits Of Where Humans Can Live

On an isolated segment of islands in the Pacific Ring of Fire, residents endure volcanoes, tsunamis, dense fog, steep cliffs and long and chilly winters.

At least it might be for inhabitants of the Kuril Islands, an 810-mile archipelago that stretches from Japan to Russia. The islands, formed by a collision of tectonic plates, are nearly abandoned today, but anthropologists have learned that thousands of people have lived there on and off as far back as at least 6000 B.C., persevering despite natural disasters.

These are stone artifacts, mostly tips for spears and harpoons, found on the Kuril Islands.

"We want to identify the limits of adaptability, or how much resilience people have," said Ben Fitzhugh, associate professor of anthropology at the University of Washington. "We're looking at the islands as a yardstick of humans' capacity to colonize and sustain themselves."

Understanding what made residents stay and how they survived could inform how we adapt to modern vulnerabilities, including climate change. The findings also have implications for how we rebound from contemporary catastrophes, such as the Indonesian tsunami in 2004, hurricanes Katrina and Rita and last year's earthquake in Haiti.


The Kuril Islands, showing the de facto division between Japan and Russia over time. 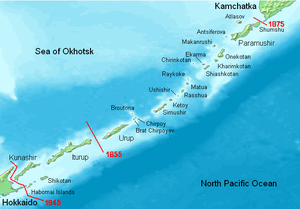 Fitzhugh is leading an international team of anthropologists, archaeologists, geologists and earth and atmospheric scientists in studying the history of human settlement on the Kuril Islands.

The team's findings will be discussed Feb. 20 during a lecture, Scales of Vulnerability and Resilience in Human Settlement of the Kuril Islands (http://aaas.confex.com/aaas/2011/webprogram/Session3031.html), at the American Association for the Advancement of Science's annual meeting in Washington, D.C.

The scientists are studying islands in the central portion of the Kurils, from Urup Island in the south to Onekotan Island in the north – about 75 percent of the island chain. During three expeditions, they've found small pit houses, pottery, stone tools, barbed harpoon heads and other remnants of the islanders' fishing and foraging lifestyle.

The scientists believe that human settlements existed in three different waves, the earliest in 6000 B.C., the most recent in 1200 A.D.

"Having relatives and friends on other Kurils meant that, when something disastrous happened locally, people could temporarily move in with relatives on nearby islands," he said.

Understanding the local environment also helped people survive the persistently foggy, dark and chilly environment. Since fog can shroud the islands, residents couldn't navigate between islands by simply pointing their boats toward destinations. Fitzhugh and his collaborators suspect that indigenous Kurilians instead used bird behavior, water currents and water temperature to navigate.

Ben Fitzhugh, an associate professor of anthropology at the University of Washington, collects charcoal samples to be used for radiocarbon dating of different layers of an eroding archaeological site in the Kurils.

Credit: Photo credit: Mike Etnier, U. Washington.
Fitzhugh says that the Kurils' population decline has less to do with environmental challenges and more to do with changes in social and political influences, such as skirmishes between Russia and Japan over control of the Kurils.

He adds that as a global society in a time of environmental changes, we have to protect abilities of small and vulnerable populations to sustain themselves.

"This is not something that will naturally rise to the top of priorities of large political systems without concerted effort," Fitzhugh said.

The work is part of the Kuril Biocomplexity Project, funded by the National Science Foundation and the University of Washington, with additional support from the Russian Academy of Sciences and the Japan Society for the Promotion of Science.