Floating solar panels have been developed by a Franco-Israeli partnership, this innovative solar power technology introduces a new paradigm in energy production. Solar power plays a dominant role in the world-wide effort to reduce greenhouse gases, it is considered a clean energy and is an efficient source of electricity. Yet several obstacles have been undermining the expansion of this sector and many of its actors are looking for a new approach towards the markets. 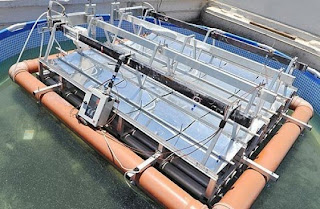 The project results from a collaboration between Solaris Synergy from Israel and the EDF Group from France. EUREKA provided the supporting platform which allowed to enhance both companies' partnership. After receiving the "EUREKA label" the project, called AQUASUN, found also support from the Israeli Ministry of Industry, Trade and Labor. "We are very pleased with the collaborative dimension of the project", says Dr. Elyakim Kassel, coordinator of the AQUASUN project and business development manager at Solaris Synergy.

Soon after the design phase was over, at the end of March 2010, the fabrication of a prototype began and the team is now aiming to launch the implementation phase in September 2011. The tests will take place at Cadarache, in the South East of France, the site having a privileged position on the French electric grid and being close to a local hydro-electric facility providing the water surface to be used for the installation of the system. It will operate on-site during a period of nine months, while assessing the system's performances and productivity through seasonal changes and various water levels. The research team members believe that by June 2012, they will have all the information required to allow the technology's entry on the market.

As even leading photovoltaic companies struggle to find land on which to install solar power plants, the project team identified the almost untouched potential of solar installations on water. The water basins, on which the plants could be built, are not natural reserves, tourists' resorts or open sea; rather they are industrial water basins already in use for other purposes. By that, it is assured that the new solar plants will not have a negative impact on natural landscapes. "It's a win-win situation", declares Dr. Kassel, "since there are many water reservoirs with energy, industrial or agricultural uses that are open for energy production use".

After solving the question of space, the team also took on the problem of cost. "It sounds magical to combine sun and water to produce electricity, but we also have to prove that it carries a financial logic for the long run", explains Dr. Kassel. The developers were able to reduce the costs linked to the implementation of the technology by two means. First they reduced the quantity of solar cells used thanks to a sun energy concentration system based on mirrors, while keeping steady the amount of power produced.

Secondly, the team used a creative cooling system using the water on which the solar panels are floating. Thanks to this efficient cooling method, the photovoltaic system can use silicon solar cells, which tend to experience problems linked to overheating and need to be cooled down in order to allow the system to work correctly, unlike standard type more expensive cells. The particular type of solar cell used also allows a higher efficiency than the standard ones, achieving both reliability and cost reduction.

Still for the purpose of making the technology efficient and ready to market, the system is designed in such way that on a solar platform it is possible to assemble as many identical modules as needed for the power rating desired. Each module produces a standard amount of 200 kiloWatt electricity, and more power can be achieved by simply adding more modules to the plant.

The team also worked on the environemental impact of the technology. It works in fact as a breathing surface through which oxygen can penetrate to the water. This feature ensures that sufficient oxygen will maintain the underwater life of plants and animals. Dr. Kassel adds: "One of the implementation phase's goals is to closely monitor the possible effects of this new technology on the environment with the help of specialists" and "a preliminary check shows no detrimental environmental impact on water quality, flora or fauna. Our choices of materials were always made with this concern in mind".

The project was featured at the 4th International Eilat-Eilot Renewable Energy Conference in Israel giving the public the occasion to observe the functioning of the first floating concentrated photovoltaic system.

According to Solaris Synergy's CEO, Yossi Fisher, the installation in Eilat has been a milestone, opening the way for "many future implementations in Israel and throughout the world".

Dr. Kassel sees to his project a last benefit: "Today, each country must consider the best resources it has in order to produce clean energy. For example: hydroelectric power is good where there are waterfalls, geothermic is productive for countries with thermal springs and solar power is very efficient where there is sun. Our system could be of great use in places that are exposed to sun, but not necessarily have sufficient natural water. Even dry countries, such as Israel or the North African countries, have industrial waters that are not rain dependent. This fact makes the floating solar power plant a reliable method for them to produce renewable energy".

Solaris Synergy installed its first live floating concentrated photovoltaic (F-CPV) system connecting to the Israel Electric Corporation (IEC) grid. The system is based at the Arava Institute for Environmental Studies' Center for Renewable Energy and Energy Conservation located on Kibbutz Ketura, 30km north of the Israeli resort town of Eilat. The project is part of Capital Nature Experimentum, a full-service verification and inspection center for new technologies developed by renewable energy companies. "This installation is a milestone for us, and we're confident that it's just the first of many future Solaris implementations in Israel and throughout the world," said Solaris Synergy CEO Yossi Fisher.