Cassini Samples Magnetic Environment Around Titan, The Most Earth-Like Of Known Worlds

NASA's Cassini spacecraft flew close to Saturn's moon Titan on Friday, Feb. 18, to learn about the interaction between Titan and Saturn's magnetosphere, the magnetic bubble around the planet. 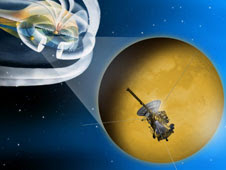 As Titan makes a complete 360-degree orbit around Saturn, the relative influence of the sun's illumination and the hot ionized gas trapped in the magnetic bubble changes. These factors are important for understanding the relationship between Titan and Saturn's magnetosphere. It is important to make measurements at a variety of locations in the Saturn magnetosphere, so this flyby will occur in a part of the magnetosphere that has been poorly sampled so far.

Previous flybys have shown the magnetic environment near Titan to be rather variable and unpredictable. For 12 hours before and after closest approach, the Cassini plasma spectrometer instrument will be pointing in a direction to capture ionized gas in the region.

At the same time, Cassini's radio science subsystem will be gathering sensitive gravity data from Titan to improve understanding of the structure of the interior. Collecting data like these will eventually enable scientists to determine whether Titan has an ocean under its crust.

Other instruments will also be collecting data, much of it pertaining to seasonal change. Titan is currently in northern spring, approaching northern summer, and scientists want to know what has changed with the north polar winter vortex weather pattern. The composite infrared spectrometer, for instance, will be mapping temperatures in Titan's stratosphere. The imaging science subsystem will also be monitoring the lakes, clouds and transport of aerosols in the Titan atmosphere.

This latest flyby is dubbed "T74," though planning changes early in the orbital tour have made this the 75th targeted flyby of Titan.

In many respects Saturn's largest moon, Titan, is one of the most Earth-like worlds we have found to date. With its thick atmosphere and organic-rich chemistry, Titan resembles a frozen version of Earth, several billion years ago, before life began pumping oxygen into our atmosphere.

Titan is of great interest to scientists because it has a substantial, active atmosphere and complex, Earth-like processes that shape its surface. The moon is enveloped by an orange haze of naturally produced photochemical smog that frustratingly obscured its surface prior to Cassini's arrival. Since 2004, the spacecraft's observations have taken the study of this unique world into a whole new dimension.

Cassini has revealed that Titan's surface is shaped by rivers and lakes of liquid ethane and methane (the main component of natural gas), which forms clouds and occasionally rains from the sky as water does on Earth. Winds sculpt vast regions of dark, hydrocarbon-rich dunes that girdle the moon's equator and low latitudes. Volcanism may occur as well, but with liquid water as the lava.

Cassini's first observations of clouds near this latitude occurred during summer in the southern hemisphere. Equinox, when the sun shone directly over the equator, occurred in August 2009. It brought a changing of the seasons, as Titan moved out of southern summer into northern spring.


The Cassini-Huygens mission is a cooperative project of NASA, the European Space Agency and the Italian Space Agency. NASA's Jet Propulsion Laboratory, Pasadena, Calif., a division of the California Institute of Technology in Pasadena, manages the mission for NASA's Science Mission Directorate, Washington, D.C. The Cassini orbiter was designed, developed and assembled at JPL.

More information about the flyby is available at: http://saturn.jpl.nasa.gov/mission/flybys/titan20110218/

More information about the Cassini-Huygens mission is at: http://www.nasa.gov/cassini and http://saturn.jpl.nasa.gov .