Can WISE Find the Hypothetical Planet 'Tyche'? It Found Sedna, Data Release To Tell the Tale

In November 2010, the scientific journal Icarus published a paper by astrophysicists John Matese and Daniel Whitmire, who proposed the existence of a binary companion to our sun, larger than Jupiter, in the long-hypothesized "Oort cloud" -- a faraway repository of small icy bodies at the edge of our solar system. The researchers use the name "Tyche" for the hypothetical planet. Their paper argues that evidence for the planet would have been recorded by the Wide-field Infrared Survey Explorer (WISE).

This colorful picture is a mosaic of the Lagoon nebula taken by NASA's Wide-field Infrared Survey Explorer, or WISE. Normally, you would expect a lagoon to be filled with water, but this nebula is composed of clouds of gas and dust in which new stars are forming. Also known as Messier 8, or simply M8, the Lagoon nebula is seen here as a large circular cloud in the center of the image, surrounded by innumerable stars. 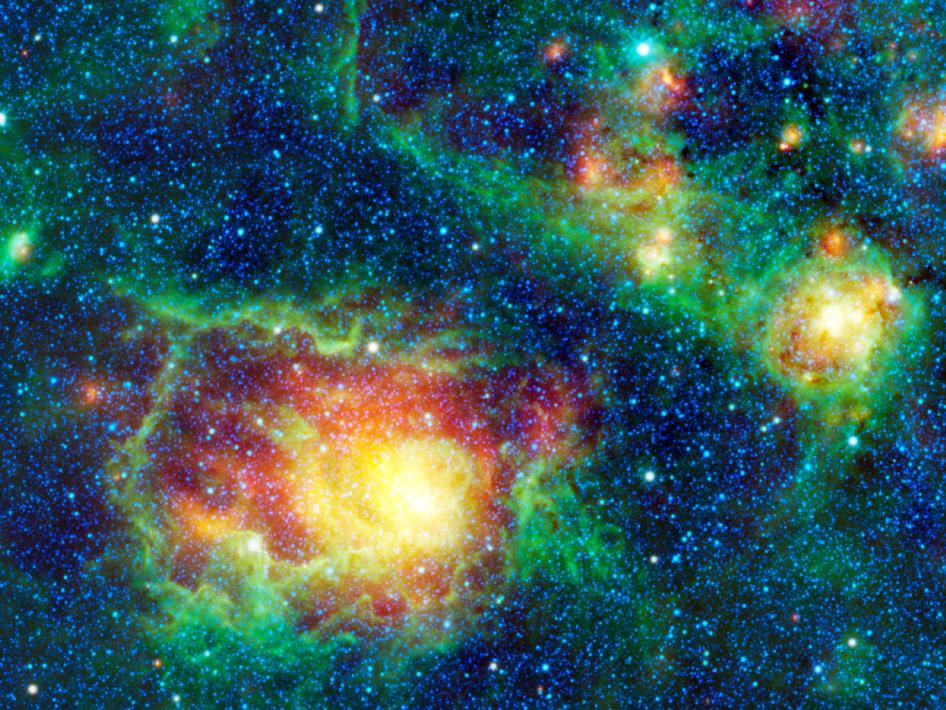 WISE is a NASA mission, launched in December 2009, which scanned the entire celestial sky at four infrared wavelengths about 1.5 times. It captured more than 2.7 million images of objects in space, ranging from faraway galaxies to asteroids and comets relatively close to Earth. Recently, WISE completed an extended mission, allowing it to finish a complete scan of the asteroid belt, and two complete scans of the more distant universe, in two infrared bands. So far, the mission's discoveries of previously unknown objects include an ultra-cold star or brown dwarf, 20 comets, 134 near-Earth objects (NEOs), and more than 33,000 asteroids in the main belt between Mars and Jupiter.

Q: When could data from WISE confirm or rule out the existence of the hypothesized planet Tyche?

A: It is too early to know whether WISE data confirms or rules out a large object in the Oort cloud. Analysis over the next couple of years will be needed to determine if WISE has actually detected such a world or not. The first 14 weeks of data, being released in April 2011, are unlikely to be sufficient. The full survey, scheduled for release in March 2012, should provide greater insight. Once the WISE data are fully processed, released and analyzed, the Tyche hypothesis that Matese and Whitmire propose will be tested.

Q: Is it a certainty that WISE would have observed such a planet if it exists?

A: It is likely but not a foregone conclusion that WISE could confirm whether or not Tyche exists. Since WISE surveyed the whole sky once, then covered the entire sky again in two of its infrared bands six months later, WISE would see a change in the apparent position of a large planet body in the Oort cloud over the six-month period. The two bands used in the second sky coverage were designed to identify very small, cold stars (or brown dwarfs) -- which are much like planets larger than Jupiter, as Tyche is hypothesized to be.

Q: If Tyche does exist, why would it have taken so long to find another planet in our solar system?

Q: Why is the hypothesized object dubbed "Tyche," and why choose a Greek name when the names of other planets derive from Roman mythology?

A: In the 1980s, a different companion to the sun was hypothesized. That object, named for the Greek goddess "Nemesis," was proposed to explain periodic mass extinctions on the Earth. Nemesis would have followed a highly elliptical orbit, perturbing comets in the Oort Cloud roughly every 26 million years and sending a shower of comets toward the inner solar system. Some of these comets would have slammed into Earth, causing catastrophic results to life. Recent scientific analysis no longer supports the idea that extinctions on Earth happen at regular, repeating intervals. Thus, the Nemesis hypothesis is no longer needed. However, it is still possible that the sun could have a distant, unseen companion in a more circular orbit with a period of a few million years -- one that would not cause devastating effects to terrestrial life. To distinguish this object from the malevolent "Nemesis," astronomers chose the name of Nemesis's benevolent sister in Greek mythology, "Tyche."

In 2004 an object bigger than an asteroid but smaller than a planet, was found. The mysterious planet-like body orbiting our Sun, called Sedna,  was discovered by NASA-funded researchers led by an astronomer at the California Institute of Technology, Pasadena, Calif.

The artist's rendition shows "Sedna" in relation to other bodies in the solar system, including Earth and its Moon; Pluto; and Quaoar, a planetoid beyond Pluto that was until now the largest known object beyond Pluto. 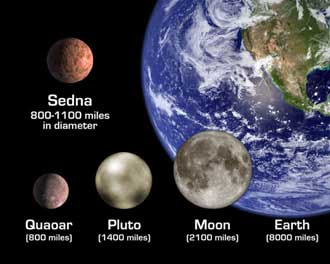 These three panels show the first detection of the faint distant object dubbed "Sedna." Imaged on November 14th from 6:32 to 9:38 Universal Time, Sedna was identified by the slight  shift in position noted in these three pictures taken at different times.

Image courtesy: NASA/Caltech.
The object is three times farther away from Earth than Pluto, making it the most distant known in the solar system.

"The Sun appears so small from that distance that you could completely block it out with the head of a pin," said Dr. Mike Brown, Caltech associate professor of planetary astronomy and leader of the research team. The object, unofficially named "Sedna," is 13 billion kilometers (8 billion miles) away from Earth.

This is likely the first detection of the long-hypothesized "Oort cloud," a faraway repository of small icy bodies that supplies the comets that streak by Earth.

The extremely elliptical orbit of Sedna is unlike anything previously seen by astronomers; however, it resembles that of objects predicted to lie in the hypothetical Oort cloud. The cloud is thought to explain the existence of certain comets. It is believed to surround the Sun and extend outward halfway to the star closest to the Sun. But Sedna is 10 times closer than the predicted distance of the Oort cloud. Brown says this "inner Oort cloud" may have been formed by gravity from a rogue star near the Sun in the solar system's early days.

Brown explained, "The star would have been close enough to be brighter than the full Moon, and it would have been visible in the daytime sky for 20,000 years." Worse, it would have dislodged comets farther out in the Oort cloud, leading to an intense comet shower that could have wiped out any life that existed on Earth at the time.

Rabinowitz says there is indirect evidence that "Sedna" may have a moon. The researchers hope to check this possibility with NASA's Hubble Space Telescope.

JPL manages and operates the Wide-field Infrared Survey Explorer for NASA's Science Mission Directorate, Washington. The principal investigator, Edward Wright, is at UCLA. The mission was competitively selected under NASA's Explorers Program managed by the Goddard Space Flight Center, Greenbelt, Md. The science instrument was built by the Space Dynamics Laboratory, Logan, Utah, and the spacecraft was built by Ball Aerospace & Technologies Corp., Boulder, Colo. Science operations and data processing take place at the Infrared Processing and Analysis Center at the California Institute of Technology in Pasadena. Caltech manages JPL for NASA. More information is online at http://www.nasa.gov/wise, http://wise.astro.ucla.edu and http://www.jpl.nasa.gov/wise .