The Biological Basis of Music

Our willingness to listen to music is biological trait and related to the neurobiological pathways affecting social affiliation and communication, suggests a recent Finnish study published in the Journal of Human Genetics.

Music is listened in all known cultures. Similarities between human and animal song have been detected: both contain a message, an intention that reflects innate emotional state that is interpreted correctly even among different species. In fact, several behavioral features in listening to music are closely related to attachment: lullabies are song to infants to increase their attachment to a parent, and singing or playing music together is based on teamwork and may add group cohesion.

The Allegory of Music by Filippino Lippi 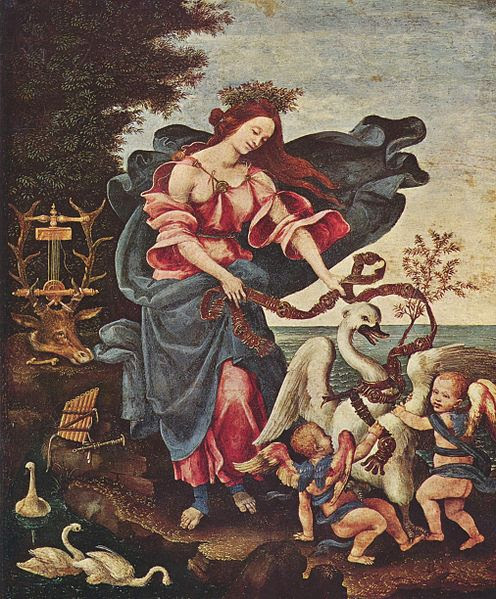 Recent genetic studies have shown familial aggregation of tone deafness, absolute pitch, musical aptitude and creative functions in music. In this study, willingness to listen to music and the level of music education varied in pedigrees.

This is one of the first studies where listening to music has been explored at molecular level, and the first study to show association between arginine vasopressin receptor 1A (AVPR1A) gene variants with listening to music. Previously, an association between AVPR1A and musical aptitude has been reported. AVPR1A gene is a gene that has been associated with social communication and attachment behavior in human and other species. The vasopressin homolog increases vocalization in birds and influences on breeding of lizards and fishes. The results suggest biological contribution to the sound perception (here listening to music), provide a molecular evidence of sound or music’s role in social communication, and are providing tools for further studies on gene-culture evolution in music.

The study belongs to the larger research project where biological basis of musical aptitude is investigated. The leader of the study is Professor Irma Järvelä from the University of Helsinki. The principal investigator is MSc Liisa Ukkola-Vuoti. The experts in statistical analyses are docent Päivi Onkamo and BSc Jaana Oikkonen from the University of Helsinki. Experts in musical aptitude are Doctor of Music Pirre Raijas and docent Kai Karma from Sibelius-Academy. The study has been published in the Journal of Human Genetics.