As one knows from the Sun, stars are nearly perfect spheres of glowing gas. One might expect that a star retained this shape, even when dramatic events happen during its lifetime. Therefore, both the slow, steady stellar winds from massive stars, as well as the cataclysmic explosions called supernovae, in which some stars end their lives, were assumed to be symmetric –quasi-spherical clouds of matter expelled into space
Color image of SN 2010jl in the galaxy UGC 5189A, obtained by Patat's team with CAFOS on the Zeiss 2.2 m reflector of Calar Alto Observatory 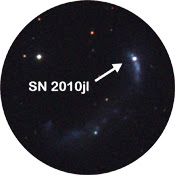 Credit: Calar Alto Observatory
However, recent developments in the observation of supernovae are providing increasing evidence that the explosion of a (nearly round) star can result in a strongly deformed fireball.
Supernovae of various kinds
The most powerful stellar explosions are called supernovae. Their amazing luminosity makes them visible over huge intergalactic distances. Some supernovae arise as a result of the interaction of peculiar stars, white dwarfs, with other stars placed very close to them. These are the so-called thermonuclear supernovae. Other explosions, core-collapse or gravitational supernovae, happen when very massive stars die. These stars have consumed the fuel that makes them shine, the energy source that supports their internal structure against the tendency to shrink and collapse due to the pull of gravity. They suffer an energy crisis that leads to an extremely violent collapse and, after that, to an explosion of apocalyptic intensity.
We are now interested in one specific sub-class of gravitational supernovae: those labelled as “Type IIn supernovae”. So far only three of them have been observed with techniques capable of providing information on the shape of the explosions. But, interestingly enough, in all three cases strong evidence of an asymmetric fireball has been found! The most recent of these studies was conducted by an international team of astronomers lead by F. Patat (ESO, Garching, Germany), who observed supernova 2010jl in November 2010 using Calar Alto telescopes and instruments. 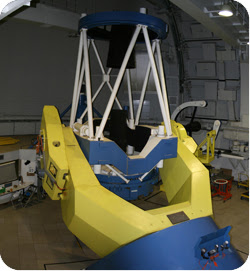 Credit: Calar Alto Observatory
Supernova 2010jl scrutinized
Supernova 2010jl appeared in the constellation Leo during the first days of November 2010. Its host galaxy was UGC 5189A, a strangely shaped specimen, an example of a galaxy in strong tidal interaction with some neighbouring galaxies. Such interaction usually leads to an intense formation of new stars, the more massive of which later will appear as gravitational supernovae. The distance to UGC 5189A is estimated to be some 160 million light-years (49 megaparsecs). This means that, although the event was seen in November 2010, the explosion really took place 160 million years ago.
Color image of SN 2010jl (arrow) in the galaxy UGC 5189A, obtained by Patat's team with CAFOS on the Zeiss 2.2 m reflector of Calar Alto Observatory 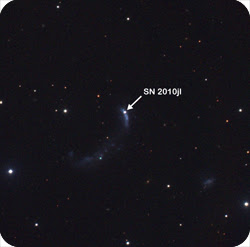 Credit: Calar Alto Observatory
Patat’s team observed this explosion using a specific technique, called spectropolarimetry, which allows to infer information on the shape of an object, even though the object itself appears as a simple, tiny point at the telescope. They made use of the spectropolarimetric capabilities of the instrument CAFOS attached to the Zeiss 2.2 m Calar Alto reflector. In the course of these observations, the researchers analysed in detail the excellent performance of this instrument, which allowed them to deduce interesting details about the process of the stellar explosion.
Light propagates through space as a wave, a vibration of the electromagnetic field that can be compared to the waves produced when a stone is dropped on the surface of water. But water waves imply only vertical movements of the surface (up and down), while natural light waves oscillate in all possible planes: up-down, left-right, and all intermediate combinations; none of them is preferred over the others. Several physical mechanisms can, however, lead to an emission of light in which one of the oscillation directions is dominant: in these cases we speak of polarized light. All processes leading to polarization imply the existence of privileged directions in the emitter, i.e. a certain degree of asymmetry. The observations of SN 2010jl show, in the researchers’ words, that light from the supernova ”appears to be polarized at a very significant level across the whole spectral range; […] the level of polarization measured in SN 2010jl (~2%) is indicative of a substantial asphericity, of axial ratio ≤0.7.”
Where does the asymmetry come from?
Gravitational supernovae arise from massive stars. In the case of SN 2010jl, it has been estimated that the parent star had a mass around thirty times that of the Sun, if not larger. Such heavy stars drive their lives wildly, consume their resources rapidly and shine only for a few million years (which is short compared with the estimated total lifespan for the Sun –some ten thousand million years). The intense energy output tears material out from the stellar surface. So, the star is continuously emitting not only energy, but also some amount of matter, atomic and subatomic particles that constitute the stellar wind and form an envelope around the star. When the final hour comes and the star explodes as a supernova, the expanding fireball collides with this envelope, and emits light due to processes that happen both inside the hot gas and at the contact surface between the hot gas and the envelope.
In SN 2010jl, the processes responsible for the polarization of light are due to the interaction with the envelope. So, the question arises: is the asymmetry caused by an intrinsically non-spherical explosion, or are we facing a more symmetrical fireball interacting with an elongated envelope? In any case, both the explosion and the envelope come from the same almost spherical star. Rotation and magnetic fields are no doubt involved in the generation of the asymmetry, but further studies are needed to clarify this point. Calar Alto telescopes and instruments will be ready to help in this effort.
Wide-field image of SN 2010jl and its host galaxy in the constellation Leo.