University of Alberta researchers determined that a fossilized dinosaur bone found in New Mexico confounds the long established paradigm that the age of dinosaurs ended between 65.5 and 66 million years ago. 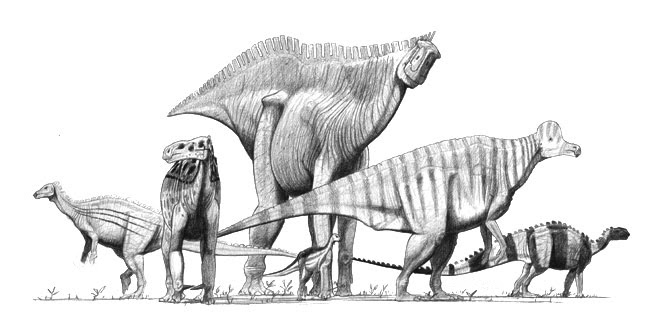 The U of A team, led by Larry Heaman from the Department of Earth and Atmospheric Sciences, determined the femur bone of a hadrosaur as being only 64.8 million years old. That means this particular plant eater was alive about 700,000 years after the mass extinction event many paleontologists believe wiped all non-avian dinosaurs off the face of earth, forever.

Heaman and colleagues used a new direct-dating method called U-Pb (uranium-lead) dating. A laser beam unseats minute particles of the fossil, which then undergo isotopic analysis. This new technique not only allows the age of fossil bone to be determined but potentially can distinguish the type of food a dinosaur eats. Living bone contains very low levels of uranium but during fossilization (typically less than 1000 years after death) bone is enriched in elements like uranium. The uranium atoms in bone decay spontaneously to lead over time and once fossilization is complete the uranium-lead clock starts ticking. The isotopic composition of lead determined in the hadrosaur's femur bone is therefore a measure of its absolute age.

Currently, paleontologists date dinosaur fossils using a technique called relative chronology. Where possible, a fossil's age is estimated relative to the known depositional age of a layer of sediment in which it was found or constrained by the known depositional ages of layers above and below the fossil-bearing horizon. However, obtaining accurate depositional ages for sedimentary rocks is very difficult and as a consequence the depositional age of most fossil horizons is poorly constrained. A potential weakness for the relative chronology approach is that over millions of years geologic and environmental forces may cause erosion of a fossil-bearing horizon and therefore a fossil can drift or migrate from its original layer in the strata. The researchers say their direct-dating method precludes the reworking process.

It's widely believed that a mass extinction of the dinosaurs happened between 65.5 and 66 million years ago. It's commonly believed debris from a giant meteorite impact blocked out the Sun, causing extreme climate conditions and killing vegetation worldwide.

Heaman and his research colleagues say there could be several reasons why the New Mexico hadrosaur came from a line of dinosaurs that survived the great mass extinction events of the late Cretaceous period (KT extinction event). Heaman says it's possible that in some areas the vegetation wasn't wiped out and a number of the hadrosaur species survived. The researchers also say the potential survival of dinosaur eggs during extreme climatic conditions needs to be explored.

Heaman and his colleagues believe if their new uranium-lead dating technique bears out on more fossil samples then the KT extinction paradigm and the end of the dinosaurs will have to be revised.

The research was published online, January 26, in the journal, Geology.