Smoking Habits Are Transmitted From Mother To Daughter And Father To Son, Single Parent To Both Sexes

A European research group has studied how smoking habits are transmitted within the home. The results show that, in homes where both parents are present, there is a significant degree of inter-generational transmission of smoking habits between parents and children, particularly between individuals of the same gender.

A Nazi anti-smoking ad titled "The chain-smoker" saying "He does not devour it [the cigarette], it devours him" 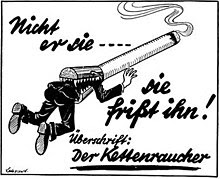 "Fathers transmit their smoking habits to a statistically significant level to their sons, and the same is true of mothers and daughters. However, if a mother smokes it does not seem to impact on the probability of her son smoking, and similarly a father that smokes does not affect his daughter", Loureiro, a researcher at the USC and co-author of the study, tells SINC.

The research, which has been published in the journal Oxford Bulletin of Economics and Statistics, is based on information from the British Household Panel Survey 1994-2002. "We selected this data source because it gives detailed information on the products consumed in households, including tobacco, making it possible to analyse the transmission of smoking habits between generations", the experts explain.

The study was carried out in homes where both parents were present as well as in single parent households, which were primarily headed by mothers.

In single-parent households, mothers transmit their smoking habits to their children - regardless of their gender. In this case, a son's likelihood of smoking if the mother smokes is 32%, and 28% for a daughter.

"These results have clear importance in terms of designing public policies to combat smoking. Policies that are successful in reducing smoking habits among parents will also affect their children. Anti-smoking policies for young people need to be put in place that will also include the family and social context in which they live", explains Loureiro.