How To Divert Doomsday Asteroid Apophis From Collision With Earth on Friday, April 13th 2029

So you think global warming is a big problem? What could happen if a 25-million-ton chunk of rock slammed into Earth? When something similar happened 65 million years ago, the dinosaurs and other forms of life were wiped out.

City Tech student Thinh Lê with the apparatus he built to measure the optical transmission of meteorite samples. 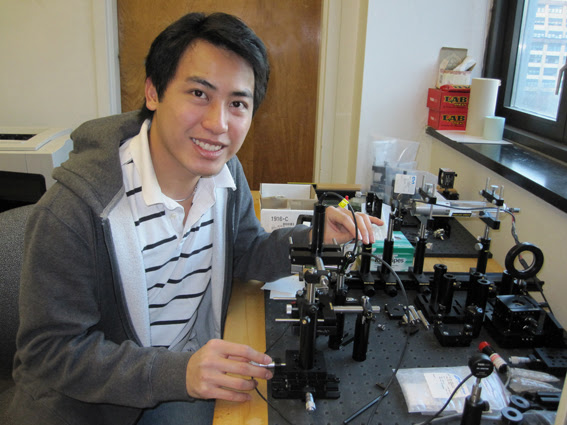 “A collision with an object of this size traveling at an estimated 30,000 to 40,000 mile per hour would be catastrophic,” according to NASA researcher and New York City College of Technology (City Tech) Associate Professor of Physics Gregory L. Matloff. His recommendation? “Either destroy the object or alter its trajectory.” 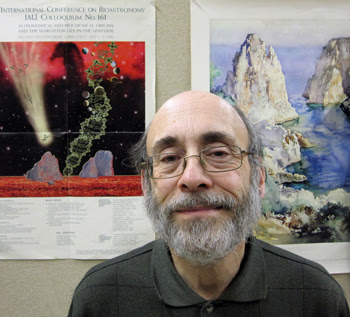 Dr. Matloff, whose research includes the best means to avert such a disaster, believes that diverting such objects is the wisest course of action. In 2029 and 2036, the asteroid Apophis (named after the Egyptian god of darkness and the void), at least 1,100 feet in diameter, 90 stories tall, and weighing an estimated 25 million tons, will make two close passes by Earth at a distance of about 22,600 miles.

Illustration of a common trend where progressively reduced uncertainty regions result in an asteroid impact probability increasing followed by a sharp decrease. 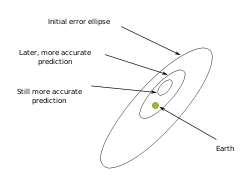 “We don’t always know this far ahead of time that they’re coming,” Dr. Matloff says, “but an Apophis impact is very unlikely.” If the asteroid did hit Earth, NASA estimates, it would strike with 68,000 times the force of the atom bomb that leveled Hiroshima. A possibility also exists that when Apophis passes in 2029, heating as it approaches the sun, it could fragment or emit a tail, which would act like a rocket, unpredictably changing its course. If Apophis or its remnants enter one of two “keyholes” in space, impact might happen when it returns in 2036.

Large chunks of space debris whizzing by the planet, called Near-Earth Objects (NEOs), are of real concern. NASA defines NEOs as comets and asteroids that enter Earth’s neighborhood because the gravitational attraction of nearby planets affects their orbits. Dr. Matloff favors diverting rather than exploding them because the latter could create another problem — debris might bathe Earth in a radioactive shower.

Dr. Matloff’s research indicates that an asteroid could be diverted by heating its surface to create a jet stream, which would alter its trajectory, causing it to veer off course. In 2007, with a team at the NASA Marshall Space Flight Center in Huntsville, Alabama, he investigated methods of deflecting NEOs. The team theorized that a solar collector (SC), which is a two-sail solar sail configured to perform as a concentrator of sunlight, could do the trick. Constructed of sheets of reflective metal less than one-tenth the thickness of a human hair, an SC traveling alongside an NEO for a year would concentrate the sun’s rays on the asteroid, burn off part of the surface, and create the jet stream.

To do that, it is necessary to know how deeply the light would need to penetrate the NEO’s surface. “A beam that penetrates too deeply would simply heat an asteroid,” explains Dr. Matloff, “but a beam that penetrates just the right amount — perhaps about a tenth of a millimeter — would create a steerable jet and achieve the purpose of deflecting the asteroid.”

For the past year, Dr. Matloff and a team of City Tech scientists have been experimenting with red and green lasers to see how deeply they penetrate asteroidal rock, using solid and powdered (regolith) samples from the Allende meteorite that fell in Chihuahua, Mexico in 1969. Dr. Denton Ebel, meteorite curator at the American Museum of Natural History in New York City, provided the samples.

Assistant Professor of Physics Lufeng Leng, a photonics and fiber optics researcher, along with student Thinh Lê, an applied mathematics senior, used lasers to obtain optical transmission measurements (the fraction of light passing through the asteroidal material). Their research was supported by a Professional Staff Congress-City University of New York research grant.

“To my knowledge,” says Dr. Matloff, “this is the first experimental measurement of the optical transmission of asteroid samples. Dr. Ebel is encouraging other researchers to repeat and expand on this work.”

In a related study, Dr. Leng and her student (whose research was partially supported by City Tech’s Emerging Scholars Program) narrowed the red laser beam and scanned the surface of a thin-section Allende sample, discovering that differences in the depth of transmitted light exist, depending on the composition of the material through which the beam passes. From their results, they concluded that lasers aimed from a space probe positioned near an NEO could help determine its surface composition. Using that information, solar sail technology could more accurately focus the sun’s rays to penetrate the asteroid’s surface to the proper depth, heating it to the correct degree for generating a jet stream that would re-direct the asteroid.

“For certain types of NEOs, by Newton’s Third Law, the jet stream created would alter the object’s solar orbit, hopefully converting an Earth impact to a near miss,” Dr. Matloff states. However, he cautions, “Before concluding that the SC will work as predicted on an actual NEO, samples from other extraterrestrial sources must be analyzed.”

Dr. Matloff presented a paper on the results of the City Tech team’s optical transmission experiments, “Optical Transmission of an Allende Meteorite Thin Section and Simulated Regolith,” at the 73rd Annual Meeting of the international Meteoritical Society, held at the American Museum of Natural History and the Park Central Hotel in New York City.

“At present,” he adds, “a debate is underway between American and Russian space agencies regarding Apophis. The Russians believe that we should schedule a mission to this object probably before the first bypass because Earth-produced gravitational effects during that initial pass could conceivably alter the trajectory and properties of the object. On the other hand, Americans generally believe that while an Apophis impact is very unlikely on either pass, we should conduct experiments on an asteroid that runs no risk of ever threatening our home planet.”