In a study published online today in Genome Research, in coordination with the publication of the orangutan genome sequence, scientists have presented the surprising finding that although orangutans and humans are more distantly related, some regions of our genomes are more alike than those of our closest living relative, the chimpanzee. 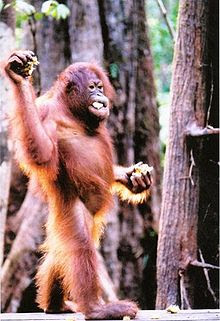 The fossil record helped to establish evolutionary relationships and estimate divergence times of the primate branch leading to humans, but not until the advent of genome sequencing technology has it been possible to learn more detail about speciation times, genetic and phenotypic divergence times, and the genetic variation present in common ancestor species.

With the addition of the orangutan to the collection of sequenced primate genomes, an international group of scientists led by Mikkel Schierup and Thomas Mailund of Aarhus University in Denmark set out to shed light on these questions in primate evolution. "There remains signals of the distant past in DNA," said Mailund, "and our approach is to use such signals to study the genetics of our ancestors."

When a population "splits", the genetic variation they each inherit from the common ancestor will change over time as the populations diverge, possibly giving rise to two different species. Because humans, chimps, and orangutans all have a common ancestor, it is possible that humans and orangutans may still share genetic variants that were later lost in more closely related primates.

Mailund and colleagues employed a mathematical framework to find regions of the orangutan genome where humans and orangutans are more closely related than humans and chimpanzees as a result of a phenomenon called incomplete lineage sorting (ILS). ILS can reveal information about the time of speciation events, as well as the genetic diversity of the ancestral species.

Schierup explained that because humans and orangutans split millions of years prior to the human/chimp split, the presence of ILS suggests that the ancestral species of human and chimps maintained high genetic diversity, in contrast to the genetic bottleneck humans are believed to have experienced following divergence from chimps.

Scientists from Aarhus University (Aarhus, Denmark) and the University of Wisconsin (Madison, WI) contributed to this study.

This work was supported by the Danish Natural Sciences Research Council.

About the article: The manuscript will be published online ahead of print on January 26, 2011. Its full citation is as follows: Hobolth A, Dutheil JY, Hawks J, Schierup MH, Mailund T. Incomplete lineage sorting patterns among human, chimpanzee and orangutan suggest recent orangutan speciation and widespread selection. Genome Res doi: 10.1101/gr.114751.110.

Launched in 1995, Genome Research (www.genome.org) is an international, continuously published, peer-reviewed journal that focuses on research that provides novel insights into the genome biology of all organisms, including advances in genomic medicine. Among the topics considered by the journal are genome structure and function, comparative genomics, molecular evolution, genome-scale quantitative and population genetics, proteomics, epigenomics, and systems biology. The journal also features exciting gene discoveries and reports of cutting-edge computational biology and high-throughput methodologies.

Cold Spring Harbor Laboratory is a private, nonprofit institution in New York that conducts research in cancer and other life sciences and has a variety of educational programs. Its Press, originating in 1933, is the largest of the Laboratory's five education divisions and is a publisher of books, journals, and electronic media for scientists, students, and the general public.
on January 26, 2011