A coronal mass ejection (CME) in a model; the CME is the gray cloud toward the lower right. 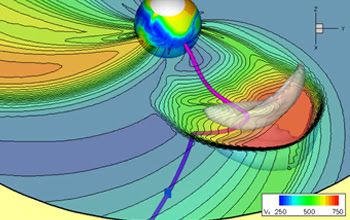 These streams from the Sun may severely disrupt or damage space- and ground-based communications systems, and pose hazards to satellite operations.

This Center for Integrated Space Weather Modeling display will be used to predict space weather. 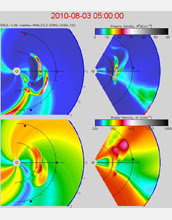 CISM is an NSF Science and Technology Center (STC) made up of 11 member institutions. Established in 2002, CISM researchers address the emerging system-science of Sun-to-Earth space weather.

The research-to-operations transition has been enabled by an unprecedented partnership between the Boston University-led CISM and the National Oceanic and Atmospheric Administration (NOAA)'s Space Weather Prediction Center.

"It's very exciting to pioneer a path from research to operations in space weather," says scientist Jeffrey Hughes of Boston University, CISM's director. "The science is having a real impact on the practical problem of predicting when 'solar storms' will affect us here on Earth."

The development comes in response to the growing critical need to protect the global communications infrastructure and other sensitive technologies from severe space weather disruptions.

This transition culminates several years of close cooperation between CISM and its partner organizations to integrate, improve and validate a model for operational forecast use.

Having key team members co-located during this critical phase of development enabled an ongoing discussion between forecasters and scientists that enhanced the development of the model, says Hughes, and ultimately led to NOAA's decision to bring it into operation as the first large-scale physics-based space weather model.

A large coronal mass ejection observed by the SOHO spacecraft in December, 2003. 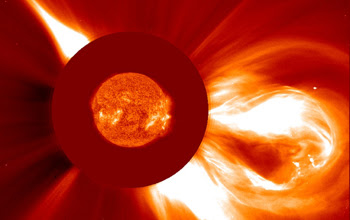 CISM's research and education activities center on developing and validating physics-based numerical simulation models that describe the space environment from the Sun to the Earth.

The lead model developers for the work are CISM team members Dusan Odstrcil of George Mason University and Nick Arge of the Air Force Research Lab.