The image was taken to test the functionality of the control computer and camera associated with EarthKAM, an educational outreach project that allows Earth bound middle school students to take pictures of our home planet from the unique perspective of the space station, 220 miles above the Earth's surface. WORF was delivered to the station on the STS-131 mission of space shuttle Discovery in April 2010. 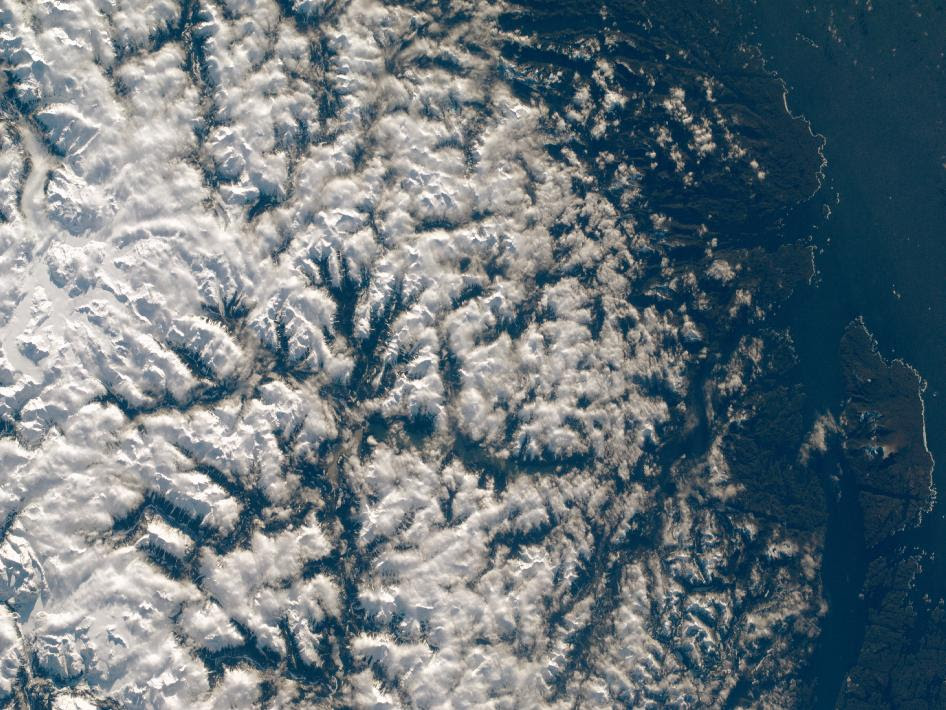 The test photo, designated ISS EarthKAM Image Winter 2011 #9362, is of an area of British Columbia, Canada, just north of Vancouver Island. The center point of the photo is 51 degrees, 48 minutes north and 127 degrees, 54 minutes west. Visible in the photo are Calvert and Hecate Islands on the Canadian coast and the southern portion of Hunter Island. Also visible are glaciers of the Ha-iltzuk Icefield near the 8,720-foot-tall -- 2,658-meter-tall -- Mount Somolenko. Mount Somolenko is a volcanic peak in southwestern British Columbia, that lies in a circular volcanic depression in the Pacific Ranges of the Coast Mountains called the Silverthrone Caldera.

While this isn't a particularly unique Earth observation image, it is notable that even though it was taken with a wider angle, 50mm lens and covers an area 124 miles/200 kilometers, by 83 miles/134 kilometers, it can be enlarged by more than 400 percent while keeping features in the photo identifiable. This is made possible by the high-quality optics of the Earth-facing window of the Destiny Laboratory, which was launched on Feb. 7, 2001.

The installation of WORF allowed removal of an internal "scratch pane" that has reduced the quality of images taken though the window. WORF also provides a highly stable mounting platform to hold cameras and sensors rock steady at the window, as well as the power, command, data, and cooling connections needed for their operation.

"With the WORF finally in place we can now for the first time make full use of the investment we made in having an optical quality window onboard the station for Earth science and observation," said former astronaut Mario Runco, who was part of the design and development teams for the Destiny window and WORF, and now serves as NASA's lead for Spacecraft Window Optics and Window/WORF Utilization at NASA's Johnson Space Center, Houston.

"We are very excited to have a new camera system that appears to be functional and taking incredible images," said Karen Flammer, who manages EarthKAM operations at the University of California, can Diego. "The first student images were taken by Parkview Montessori in the Jackson-Madison County (Tenn.) School System, and Public School 229 - Dyker in Brooklyn, N.Y., part of the New York City Department of Education.

Parkview teacher Vickie LeCroy's students plan to study landforms, such as islands, mountains and deserts in the image they took of Mexico, and Dyker teacher Camille Fratantoni’s students plan to enrich their studies of earth science and learn more about NASA missions.


In addition to their educational outreach role with EarthKAM, the combination of the window and WORF adds to the station's capabilities as an Earth science remote sensing platform for high-resolution cameras and multi and hyperspectral imagers. Images from space have many applications, such as in the study of climate and meteorology; oceanography; geology and volcanology; coastal, agricultural, ranch and forestry management; and disaster assessments and management.

The test image is available in multiple sizes and resolutions, visit:  http://images.earthkam.ucsd.edu/main.php?g2_itemId=33992