Super Blue Jeans Can Tow Cars Without Tearing, Made of UHMWPE Fiber 10-100 Stronger Than Steel 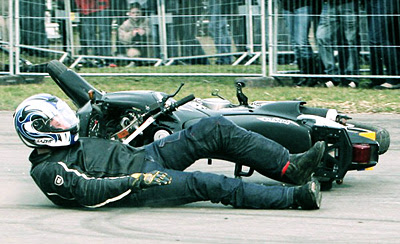 Like 75% of European motorcycle riders, Pierre-Henry Servajean was wearing regular jeans when he took a bad spill on his bike in 1995:

“I realised everything I had on my body was perfect – my helmet, gloves, jacket – except the jeans. I had suitable things for every part of my body, except my legs.”

Ultra high molecular weight polyethylene’ (UHMWPE) are fibres that are twice as strong as Kevlar, and 10–100 times stronger than steel. The realisation triggered a decade-long quest to find a fabric that combines the comfort and breathability of denim with the strength and abrasion resistance of protective gear like motorcycle leathers.

It ultimately led him to the founding of ESquad, a fashion label devoted to ultra-durable motorcycle jeans.

Pierre-Henry knew there were many fabrics that might fit part of the bill. Kevlar, for example, is legendarily tough.

High-tech jeans
But Kevlar has some major flaws when it comes to apparel. It doesn’t ‘breathe’, in the woven form it is uncomfortable to wear and starts to disintegrate when it’s exposed to the ultraviolet in sunlight.

To find a fibre that could beat Kevlar, Pierre-Henry had to go further afield. After extensive research, he lit upon a fibre known as ‘ultra high molecular weight polyethylene’ (UHMWPE).

It is a form of polyethylene, the world’s most common plastic, but the fibres are twice as strong as Kevlar, and 10–100 times stronger than steel.

Hummer hanging in high-tech jeans
The fabric is a perfect combination of abrasion resistance, strength and comfort.
Tested to European standards, it measures up to motorcycle leather in terms of crash protection.
To demonstrate the fabric’s strength, Pierre-Henry orchestrated a unique publicity stunt: he suspended a 2700 kg Hummer from a pair of the jeans.
The motorcycle community has gotten the message already: ESquad jeans are sold in motorcycle shops all over Europe, and have earned rav

Hummer hanging in high-tech jeans from Esquad. The jeans are made of cotton wrapped with UHMWPE fibres – the same ultra-strong fibres that ESA used in a 30 km-long line to deploy a small reentry capsule in orbit. 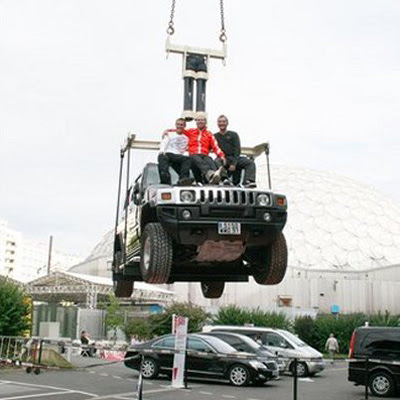 UHMWPE
By taking the same fibres and wrapping them in cotton, Pierre-Henry managed to create a fabric that combines the qualities of jeans with the toughness and strength of UHMWPE: “In the core of the yarn, instead of cotton you have high-performance fibre.

Working with ESA’s technology transfer broker in France, Nodal, Pierre-Henry’s Armalith fabric is being highlighted by ESA as part of its Technology Transfer Programme to find use in other non-space sectors.


Deployment of YES2,  Held ESA satellite on 30 km tether
Deployment of the Second Young Engineers’ Satellite (YES2) payload on the Foton-M3 mission. The 30 km-long line used for the tether experiment performed by the 36 kg YES2 satellite was made of UHMWPE fibres.
UHMWPE is so strong yet so lightweight that in 2007 it was used to produce a very special line for the YES2 tether experiment that piggybacked on ESA's Foton-M3 microgravity mission.
Only half a millimetre thick, a 30 km-long line of UHMWPE fibres dangled a small reentry capsule in orbit, demonstrating that 'space mail' can be sent using a relatively simple and cheap mechanism.