Six years after the tsunami disaster of 26/12/2004, the set-up of the German-Indonesian Tsunami Early Warning System for the Indian Ocean (GITEWS) has been completed. The project ends on 31 March 2011. After that, Indonesia accepts the sole responsibility for the overall system. 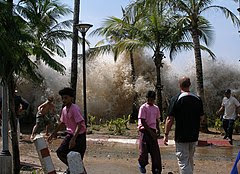 "The innovative technical approach of GITEWS is based on a combination of different sensors, whose central element is a fast and precise detection and analysis of earthquakes, supported by GPS measurements," says Professor Reinhard Hüttl, Scientific Director of the GFZ German Research Centre for Geosciences. "The GFZ-developed evaluation of Seismology via the SeisComP3 system proved to be so fast and reliable that it has now been installed in over 40 countries.”

A tsunami warning takes place no more than five minutes after a submarine earthquake, based on all the available information from the 300 stations that were built throughout Indonesia in the past 6 years. These include seismometers, GPS stations, tide gauges and buoy systems.

Via a tsunami-simulation system, the information is converted into a situation map providing the appropriate warning levels for the affected coastline. A key outcome of GITEWS project is, however, that the buoy systems do not contribute to this process that occurs in these first few minutes. There are therefore considerations to shift the GITEWS buoys further into the open ocean and to use them to verify an ocean-wide tsunami that could threaten other countries bordering the Indian Ocean.

The Mentawai quake on 25 October this year, however, also showed the limits of any tsunami warning. The tsunami caused by the earthquake strongly affected the upstream Pagai islands in the Sunda Arc. The first waves arrived around the same time as the triggered tsunami alert, 4 minutes 46 seconds after the quake, and demanded some 500 lives. Several teams of tsunami experts from Japan, Indonesia, Germany and the USA noted in a follow-up analysis that the warning had arrived on the islands, but there had been no time to react.

For the main island of Sumatra with the larger cities of Padang and Bengkulu, the time between the warning and the arrival of the first waves amounted to about 40 minutes, but in this case the Pagai Islands acted as a perfect shield against a tsunami reaching the coast of Sumatra.

The important conclusion is that even with the extremely short premonition times off Indonesia, the GITEWS system has proven to be technically and organizationally functional. Since September 2007, four tsunami events were detected and warnings were issued for each. Especially the inhabitants of the off-shore islands, however, need to receive intensified and improved training on how to act when threatened. This includes not only the correct response during a tsunami alert, but also the correct behaviour before, during and after earthquakes.

Immediately after the disaster of 26 December 2004, the Federal Government of Germany contracted the Helmholtz Association, represented by the Helmholtz Centre Potsdam – GFZ German Research Centre for Geosciences, to develop and implement an early warning system for tsunamis in the Indian Ocean. The funds to the amount of 45 million euros are a contribution of the Federal Government from the aid-for-flood-victims pool.

A natural phenomenon like the tsunami of 2004 cannot be prevented, and such disasters will continue to claim victims, even with a perfectly working alarm system. But the repercussions of such a natural disaster can be minimized with an early warning system. This is the aim of GITEWS.