The Mid-Atlantic and northeastern U.S. are not the only areas dealing with holiday snowfall. Ireland was recently swathed in white on December 22, 2010. When NASA's Terra satellite passed overhead, the Moderate Resolution Imaging Spectroradiometer (MODIS) instrument captured a true-color image of the snow. The overnight arrival of 15 cm (6 in) of snow at the Dublin airport forced its closure. Combined with the closure of the City of Derry airport, travel became quite difficult.

The Emerald Isle was swathed in white on December 22, 2010, when the MODIS instrument aboard the Terra satellite passed overhead, capturing this true-color image. 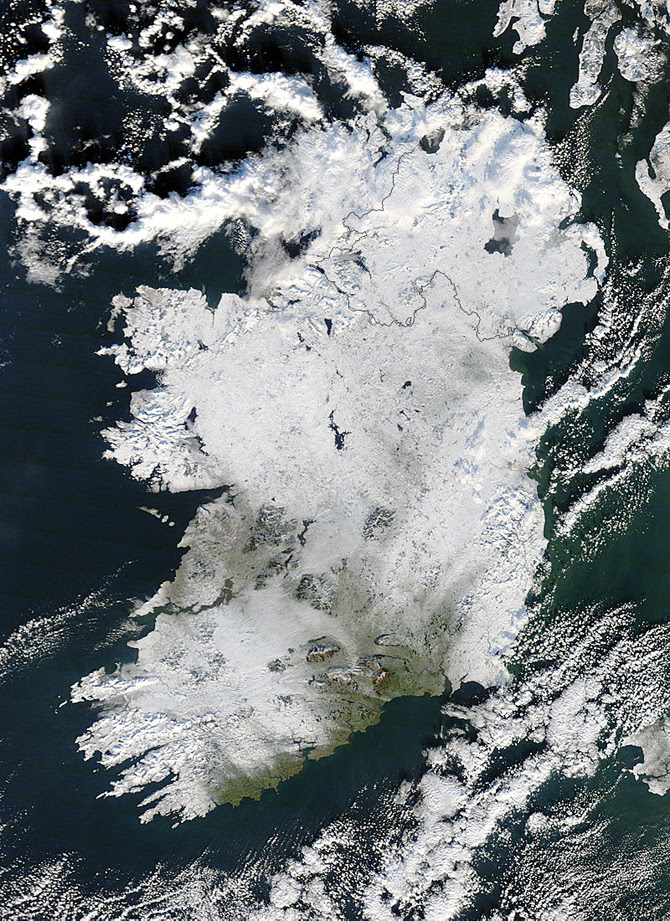 Ireland enjoys a "temperate ocean climate" (Cfb) based on the Koopen climate classification system. Such climates normally enjoy cool, cloud-covered summers and mild winters. Ireland’s climate is also moderated by the warm waters of the Gulf Stream, which flows off the western shore. Snow commonly falls only in the highest elevations; dustings may occur elsewhere a few times each year. Significant accumulations anywhere in the country are rare.

The winter of 2009-2010 was unusually cold and snowy. Called “The Big Freeze” by the British media, it brought widespread transportation problems, school closings, power failures and twenty five deaths. A low of -22.3°C (-8.1°F) was recorded on January 8, 2010, making it the coldest winter since 1978/79.

Although it has just begun, the winter of 2010-2011 threatens to be just as challenging. The earliest widespread snowfall since 1993 occurred on November 24, primarily affecting Great Britain and Scotland. Two days later snow began to cover Ireland, and the continuing severe weather has taken a toll. It has disrupted air, road and rail travel, closed schools and businesses, and caused power outages. Livestock and horses have had difficulty finding grass to eat, some relying on volunteer feeding efforts for survival. Local temperature records were broken, including a new record low for Northern Ireland of -18.7°C (-2°F) at Castlederg on December 23. As of that date, 20 deaths had been attributed to the winter weather and associated hazards.