NASA's Next Mars Rover to Zap Rocks With Laser

A rock-zapping laser instrument on NASA's next Mars rover has roots in a demonstration that Roger Wiens saw 13 years ago in a colleague's room at Los Alamos National Laboratory in New Mexico.

The Chemistry and Camera (ChemCam) instrument on the rover Curiosity can hit rocks with a laser powerful enough to excite a pinhead-size spot into a glowing, ionized gas. ChemCam then observes the flash through a telescope and analyzes the spectrum of light to identify the chemical elements in the target.

That information about rocks or patches of soil up to about 7 meters (23 feet) away will help the rover team survey the rover's surroundings and choose which targets to drill into, or scoop up, for additional analysis by other instruments on Curiosity. With the 10 science instruments on the rover, the team will assess whether any environments in the landing area have been favorable for microbial life and for preserving evidence about whether life existed. In late 2011, NASA will launch Curiosity and the other parts of the flight system, delivering the rover to the surface of Mars in August 2012.

Wiens, a geochemist with the U.S. Department of Energy's Los Alamos National Laboratory, serves as ChemCam's principal investigator. An American and French team that he leads proposed the instrument during NASA's 2004 open competition for participation in the Mars Science Laboratory project, whose rover has since been named Curiosity.

In 1997, while working on an idea for using lasers to investigate the moon, Wiens visited a chemistry laboratory building where a colleague, Dave Cremers, had been experimenting with a different laser technique. Cremers set up a cigar-size laser powered by a little 9-volt radio battery and pointed at a rock across the room.

"The room was well used. Every flat surface was covered with instruments, lenses or optical mounts," Wiens recalls. "The filing cabinets looked like they had a bad case of acne. I found out later that they were used for laser target practice."

Cremers pressed a button. An invisible beam from the laser set off a flash on a rock across the room. The flash was ionized gas, or plasma, generated by the energy from the laser exciting atoms in the rock. A spectrometer pointed at the glowing plasma recorded the intensity of light at different wavelengths for determining the rock's atomic ingredients.

Researchers have used lasers for inducing plasmas for decades. What impressed Wiens in this demonstration was the capability to do it with such a low-voltage power source and compact hardware. Using this technology for a robot on another planet seemed feasible. From that point, more than a decade of international development and testing resulted in ChemCam being installed on Curiosity in September 2010.

The international collaboration came about in 2001 when Wiens introduced a former Los Alamos post-doctoral researcher, Sylvestre Maurice, to the project. The core technology of ChemCam, laser-induced breakdown spectroscopy, had been used for years in France as well as in America, but it was still unknown to space scientists there. "The technique is both flashy and very compelling scientifically, and the reviewers in France really liked that combination," Maurice said. A French team was formed, and work on a new laser began.

"The trick is very short bursts of the laser," Wiens said. "You really dump a lot of energy onto a small spot -- megawatts per square millimeter -- but just for a few nanoseconds."

The pinhead-size spot hit by ChemCam's laser gets as much power focused on it as a million light bulbs, for five one-billionths of a second. Light from the resulting flash comes back to ChemCam through the instrument's telescope, mounted beside the laser high on the rover's camera mast. The telescope directs the light down an optical fiber to three spectrometers inside the rover. The spectrometers record intensity at 6,144 different wavelengths of ultraviolet, visible and infrared light. Different chemical elements in the target emit light at different wavelengths.

If the rock has a coating of dust or a weathered rind, multiple shots from the laser can remove those layers to provide a clear shot to the rock's interior composition. "We can see what the progression of composition looks like as we get a little bit deeper with each shot," Wiens said.

Earlier Mars rover missions have lacked a way to identify some of the lighter elements, such as carbon, oxygen, hydrogen, lithium and boron, which can be clues to past environmental conditions in which the rock was formed or altered. After NASA's Mars Exploration Rover Spirit examined an outcrop called "Comanche" in 2005, it took years of analyzing indirect evidence before the team could confidently infer the presence of carbon in the rock. A single observation with ChemCam could detect carbon directly.

ChemCam will be able to interrogate multiple targets the same day, gaining information for the rover team's careful selection of where to drill or scoop samples for laboratory investigations that will take multiple days per target. It can also check the composition of targets inaccessible to the rover's other instruments, such as rock faces beyond the reach of Curiosity's arm.

The instrument's telescope doubles as the optics for the camera part of ChemCam, which records images on a one-megapixel detector. The telescopic camera will show context of the spots hit with the laser and can also be used independently of the laser.

The French half of the ChemCam team, headed by Maurice and funded by France's national space agency, provided the instrument's laser and telescope. Maurice is a spectroscopy expert with the Centre d'Étude Spatiale des Rayonnements, in Toulouse, France. Los Alamos National Laboratory supplied the spectrometers and data processor inside the rover. The optical design of the spectrometers came from Ocean Optics, Dunedin, Fla.

The ChemCam team includes experts in mineralogy, geology, astrobiology and other fields, with some members also on other Curiosity instrument teams.

With the instrument now installed on Curiosity, testing continues at NASA's Jet Propulsion Laboratory, Pasadena, Calif. JPL, a division of the California Institute of Technology in Pasadena, is assembling the rover and other components of the Mars Science Laboratory flight system for launch from Florida between Nov. 25 and Dec. 18, 2011.

Researchers prepare for a test of the Chemistry and Camera (ChemCam) instrument that will fly on NASA's Mars Science Laboratory mission. The instrument uses a pulsed laser beam to vaporize a pinhead-size target, producing a flash of light from the ionized material -- plasma -- that can be analyzed to identify chemical elements in the target.

In this photo taken at Los Alamos National Laboratory, Los Alamos, N.M., researchers are preparing the instrument's mast unit for a laser firing test. The ChemCam mast unit, which holds the instrument's telescopic camera as well as its laser, was later installed on the remote sensing mast of the mission's Mars rover, Curiosity. It shares the mast with the rover's Mast Camera and navigation cameras. ChemCam also includes a body unit that has been installed inside the rover. The body unit holds the instrument's spectrometers and data processor. Optical fiber through the mast carries light from the telescope to the spectrometers. 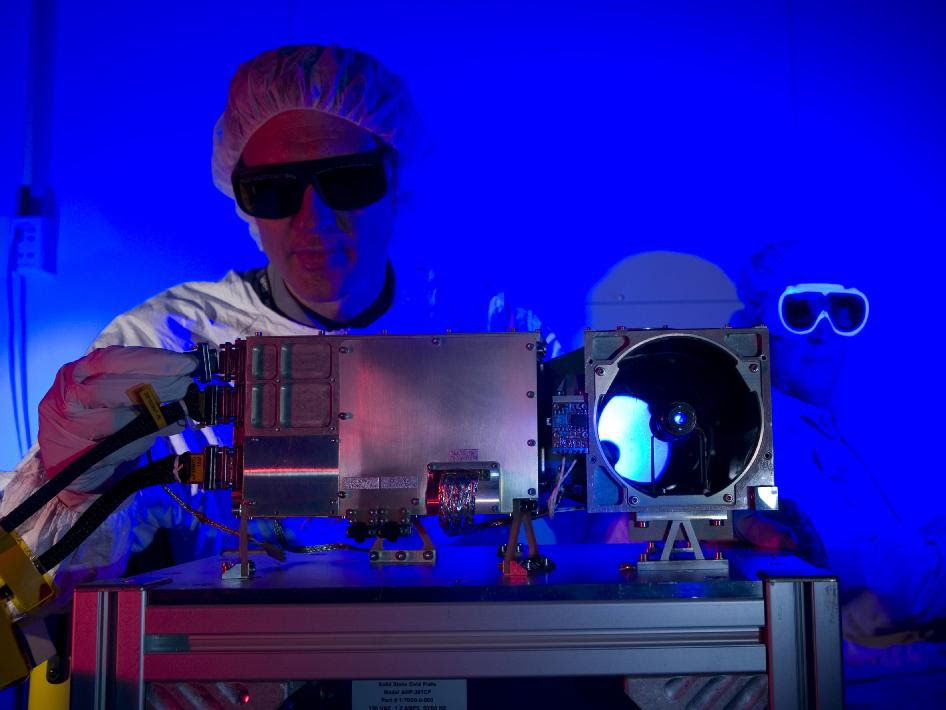 JPL, a division of the California Institute of Technology in Pasadena, manages the Mars Science Laboratory mission for the NASA Science Mission Directorate, Washington. This mission will land a rover named Curiosity on Mars in August 2012. Researchers will use the tools on the rover to study whether the landing region has had environmental conditions favorable for supporting microbial life and favorable for preserving clues about whether life existed.