A new Mars movie clip gives us a rover's-eye view of a bluish Martian sunset, while another clip shows the silhouette of the moon Phobos passing in front of the sun.

These holiday treats from the rover's panoramic camera, or Pancam, offer travel fans a view akin to standing on Mars and watching the sky.

The larger of the two moons of Mars, Phobos, transits (passes in front of) the sun in this approximately true-speed movie simulation using images from the panoramic camera (Pancam) on NASA's Mars Exploration Rover Opportunity taken on the rover's 2,415th Martian day, or sol (Nov. 9, 2010). The movie includes images that have been calibrated and enhanced, plus simulated frames used to smooth the action.

Images of solar transits of Phobos and the other Mars moon, Deimos, taken over many years by Mars rovers aid in studies of slight changes in the moons' orbits.

The larger of the two moons of Mars, Phobos, transits (passes in front of) the sun in this approximately true-speed movie simulation using images from the panoramic camera (Pancam) on NASA's Mars Exploration Rover Opportunity taken on the rover's 2,415th Martian day, or sol (Nov. 9, 2010)

This movie is based on 10 individual photos taken through the Pancam's special solar filter every four seconds during the transit, which lasted about 32 seconds. The images were gradually blended together to create a simulated near-real-speed animation of the event. The moviemakers supplemented those images with sky color information from a pair of images taken right after the transit through two regular imaging filters: one centered on a wavelength of 440 nanometers (blue) and the other on 750 nanometers (near infrared).

The silhouette of Phobos looks smaller than in some other Mars rover transit images (for example, http://photojournal.jpl.nasa.gov/catalog/PIA05554) because when Phobos is near the horizon it is more than 30 percent farther from the camera's location than when it is straight overhead. 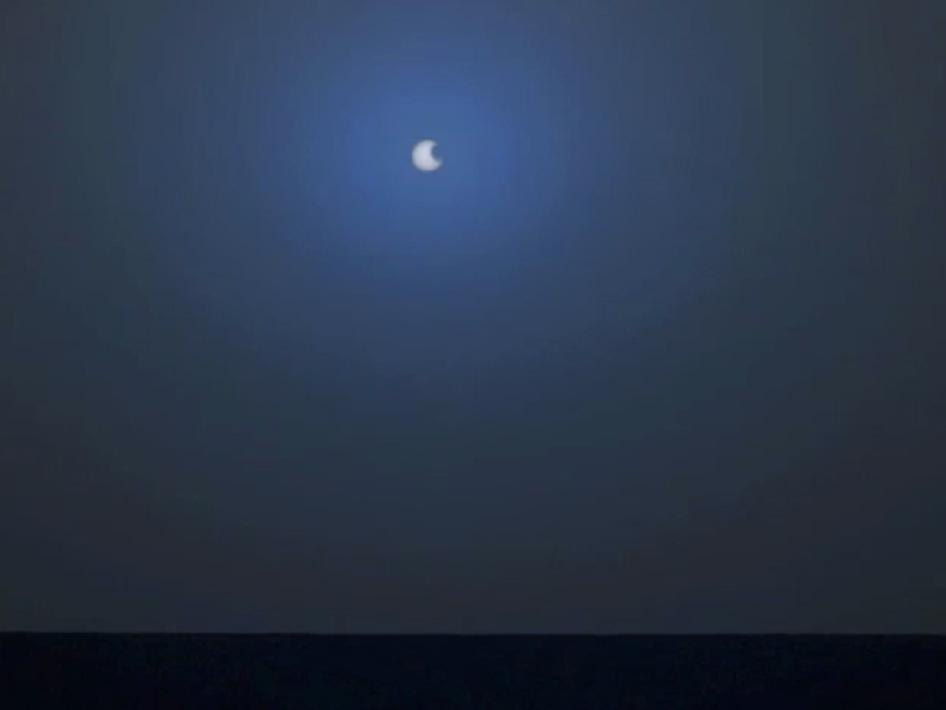 "These visualizations of an alien sunset show what it must have looked like for Opportunity, in a way we rarely get to see, with motion," said rover science team member Mark Lemmon of Texas A&M University, College Station. Dust particles make the Martian sky appear reddish and create a bluish glow around the sun.

The sunset movie, combining exposures taken Nov. 4 and Nov. 5, 2010, through different camera filters, accelerates about 17 minutes of sunset into a 30-second simulation. One of the filters is specifically used to look at the sun. Two other filters used for these shots provide color information. The rover team has taken Pancam images of sunsets on several previous occasions, gaining scientifically valuable information about the variability of dust in the lower atmosphere. The new clip is the longest sunset movie from Mars ever produced, taking advantage of adequate solar energy currently available to Opportunity.

The two Martian moons are too small to fully cover the face of the sun, as seen from the surface of Mars, so these events -- called transits or partial eclipses -- look quite different from a solar eclipse seen on Earth. Bell and Lemmon chose a transit by Phobos shortly before the Mars sunset on Nov. 9, 2010, for a set of Pancam exposures taken four seconds apart and combined into the new, 30-second, eclipse movie. Scientifically, images years apart that show Phobos' exact position relative to the sun at an exact moment in time aid studies of slight changes in the moon's orbit. This, in turn, adds information about the interior of Mars.

The world has gained from these movies and from more than a quarter million other images from Opportunity and its twin, Spirit, since they landed on Mars in January 2004. Those gains go beyond the facts provided for science.

Bell said, "For nearly seven years now, we've been using the cameras on Spirit and Opportunity to help us experience Mars as if we were there, viewing these spectacular vistas for ourselves. Whether it's seeing glorious sunsets and eclipses like these, or the many different and lovely sandy and rocky landscapes that we've driven through over the years, we are all truly exploring Mars through the lenses of our hardy robotic emissaries.

"It reminds me of a favorite quote from French author Marcel Proust: 'The real voyage of discovery consists not in seeking new landscapes, but in having new eyes,'" he added.

Sunset Watched by Opportunity, November 2010. The sun descends to the Martian horizon and sets in this movie simulation using images from the panoramic camera (Pancam) on NASA's Mars Exploration Rover Opportunity


NASA's Jet Propulsion Laboratory, a division of the California Institute of Technology in Pasadena, manages the Mars Exploration Rover Project for NASA's Science Mission Directorate, Washington. For more information about the mission, see http://marsrovers.jpl.nasa.gov
on December 27, 2010