Snows are finally winding down in New England today, Dec. 27, as a powerful low pressure system brought blizzard conditions from northern New Jersey to Maine over Christmas weekend. The GOES-13 satellite captured an image of the low's center off the Massachusetts coast and saw the snowfall left behind.

On Monday, December 27 at 1731 UTC (12:31 p.m. EST) the GOES-13 satellite captured this visible image of the powerful low pressure system that brought snows from Georgia to Maine along the U.S. east coast. Some of the snowfall can be seen over South and North Carolina, Virginia, Maryland, Delaware, eastern Pennsylvania, New Jersey, and southeastern New York. The clouds of the low obscure New England in the image. 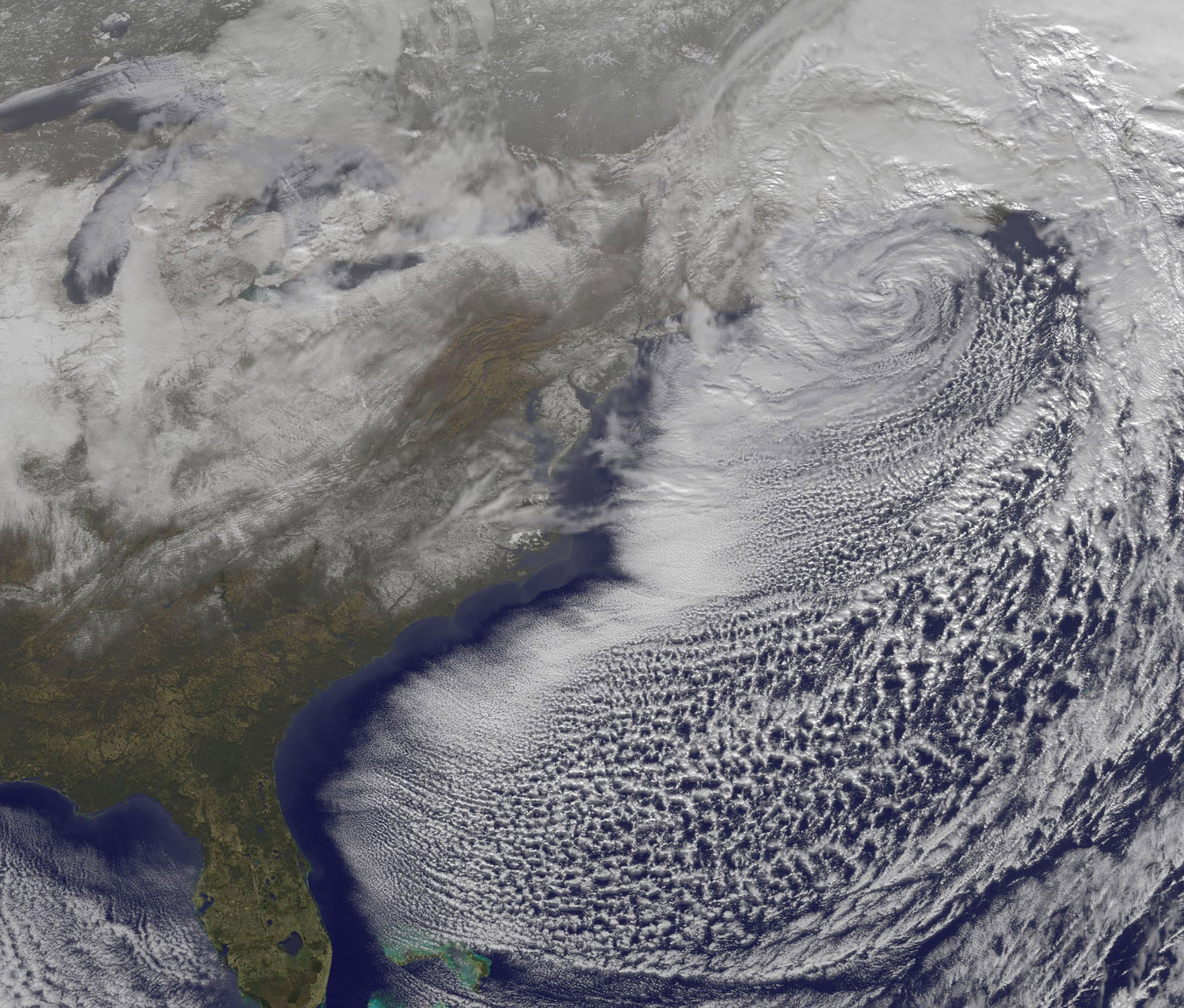 As of 1:30 p.m. EST, all blizzard warnings were canceled as the low has pulled much of its snow and rain away from land areas and into the North Atlantic Ocean. The winds behind the system are now causing more problems for residents along the U.S. East coast.

Snowfall ranged from 1.5 inches in Atlanta, Georgia to more than a foot in various areas of New Jersey, New York and the New England states. Near Wallops Island, Va. where NASA has a facility, more than 11 inches of snow was reported this morning. Newark, N.J. reported 17.7 inches of snow by midnight last night. Central Park in New York City reported 12.0 inches of snow had fallen just before midnight. Providence, Rhode Island reported 7.9 inches by midnight, while Boston, Mass. reported 9.9 inches at that time. More snow fell on top of those totals during the morning hours today.

Some of those snows are visible in today's GOES-13 satellite image. Snowfall on the ground can be seen in the image over South and North Carolina, Virginia, Maryland, Delaware, eastern Pennsylvania, New Jersey, and southeastern New York. The clouds of the low obscure New England in the image.

From Maine south to the Carolinas winds are howling in excess of 30 mph, and power outages could occur as a result of the winds and the areas with the heaviest snows. The winds in Portland, Maine today are blowing from the northwest from 20 to 30 mph with gusts over 40 mph. Yesterday in Newark, N.J. sustained winds of 41 mph were reported with gusts as high as 51 mph. Going further south, the Raleigh, N.C. National Weather Service noted that sustained northwest winds of 10 to 20 mph with gusts up to 30 mph are expected today. Even further south, Atlanta, Georgia is also experiencing winds up to 20 mph today.

The Christmas Blizzard of Dec. 25-27, 2010: Recipe: pour arctic air down the Mississippi, across the Gulf, and then up the East Coast -- keep the atmosphere stirred, not shaken. This animation was created using images from the GOES series of satellites. GOES are operated by NOAA and this animation was created by the NASA GOES Project at NASA Goddard Space Flight Center, Greenbelt, Md.
Credit: NASA/Goddard Space Flight Center

The winds are making clean-up efforts difficult along the east coast, but as temperatures are expected to slowly and steadily climb over the course of the week travel will become easier every day.
on December 27, 2010