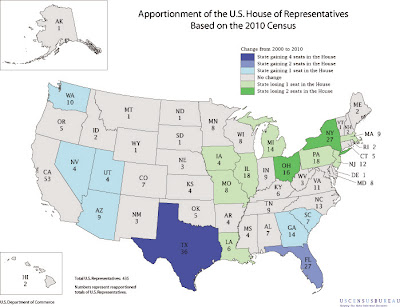 "A big thanks to the American public for its overwhelming response to the 2010 Census," U.S. Commerce Secretary Gary Locke said. "The result was a successful count that came in on time and well under budget, with a final 2010 Census savings of $1.87 billion."
Rebecca Blank, now Acting Deputy Secretary of Commerce who has overseen the 2010 Census as Under Secretary for Economic Affairs, echoed Locke. "The 2010 Census was a massive undertaking, and in reporting these first results, we renew our commitment to our great American democracy peacefully, fairly and openly for the 23rd time in our nation's history."
The U.S. resident population represents the total number of people in the 50 states and the District of Columbia.
The most populous state was California (37,253,956); the least populous, Wyoming (563,626). The state that gained the most numerically since the 2000 Census was Texas (up 4,293,741 to 25,145,561) and the state that gained the most as a percentage of its 2000 Census count was Nevada (up 35.1% to 2,700,551).
Regionally, the South and the West picked up the bulk of the population increase, 14,318,924 and 8,747,621, respectively. But the Northeast and the Midwest also grew: 1,722,862 and 2,534,225.
Additionally, Puerto Rico's resident population was 3,725,789, a 2.2 percent decrease over the number counted a decade earlier.
Just before today's announcement, Locke delivered the apportionment counts to President Obama, 10 days before the statutory deadline of Dec. 31. The apportionment totals were calculated by a congressionally defined formula, in accordance with Title 2 of the U.S. Code, to divide among the states the 435 seats in the U.S. House of Representatives. The apportionment population consists of the resident population of the 50 states, plus the overseas military and federal civilian employees and their dependents living with them who could be allocated to a state. Each member of the House represents, on average, about 710,767 people. The populations of the District of Columbia and Puerto Rico are excluded from the apportionment population, as they do not have voting seats in Congress.
"The decennial count has been the basis for our representative form of government since 1790," Groves said. "At that time, each member of the House represented about 34,000 residents. Since then, the House has more than quadrupled in size, with each member now representing about 21 times as many constituents."
President Obama will transmit the apportionment counts to the 112th Congress during the first week of its first regular session in January. The reapportioned Congress will be the 113th, which convenes in January 2013.
Beginning in February and wrapping up by March 31, 2011, the Census Bureau will release demographic data to the states on a rolling basis so state governments can start the redistricting process. 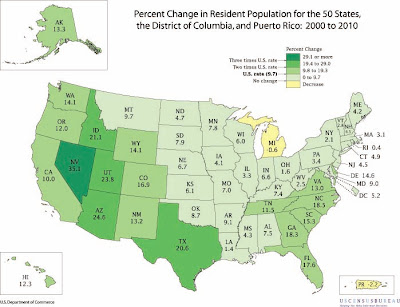 Article I, Section 2 of the U.S. Constitution calls for a census of the nation's population every 10 years to apportion the House seats among the states. The 2010 Census is the 23rd census in our nation's history.