This image is a composite of three color images taken on Nov. 18, 2010, by the Gemini North telescope in Hawaii. The composite image shows a belt that had previously vanished in Jupiter's atmosphere is now reappearing. . 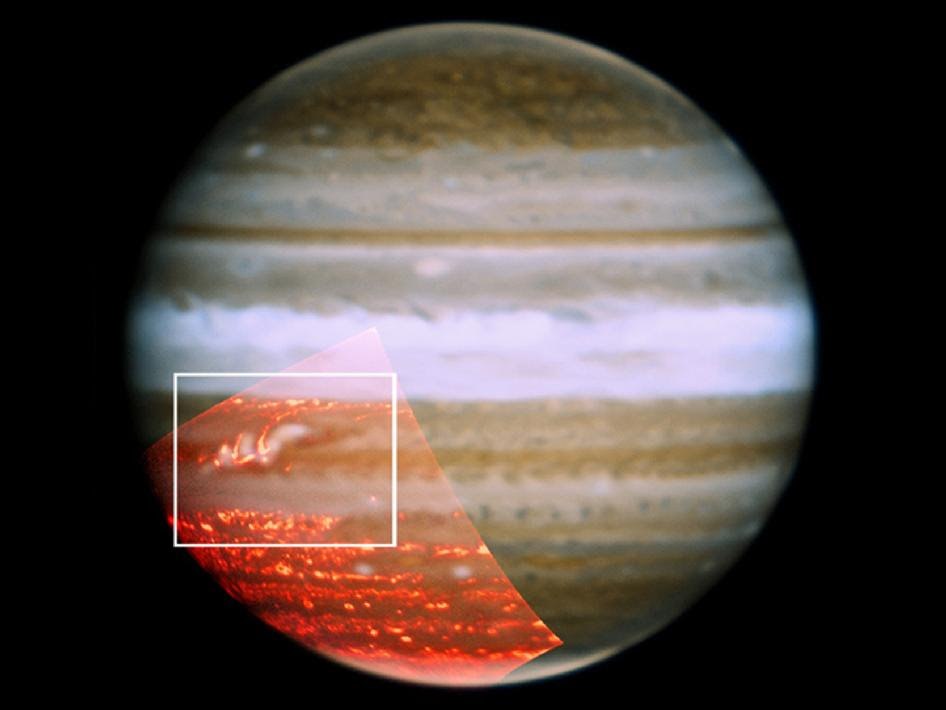 The region just to the left of the center, inside the white box, shows the region of the South Equatorial Belt with an unusually bright spot, or outbreak. One thing scientists were looking for in infrared was evidence that the darker material emerging to the west of the bright spot was the start of the clearing of the cloud deck. The particles lofted by the initial outbreak are easily identified in yellow as high-altitude particles at the upper right, with a second outbreak to the lower left. In the coming weeks, further outbreaks are expected to take place to the west (left) of those seen in this image, and the clear atmospheric regions will begin to fill this latitude band at the same time as the dark brown color typical of this region returns.

New NASA images support findings that one of Jupiter's stripes that "disappeared" last spring is now showing signs of a comeback. These new observations will help scientists better understand the interaction between Jupiter's winds and cloud chemistry.

Earlier this year, amateur astronomers noticed that a longstanding dark-brown stripe, known as the South Equatorial Belt, just south of Jupiter's equator, had turned white. In early November, amateur astronomer Christopher Go of Cebu City, Philippines, saw an unusually bright spot in the white area that was once the dark stripe. This phenomenon piqued the interest of scientists at NASA's Jet Propulsion Laboratory, Pasadena, Calif., and elsewhere.
After follow-up observations in Hawaii with NASA's Infrared Telescope Facility, the W.M. Keck Observatory and the Gemini Observatory telescope, scientists now believe the vanished dark stripe is making a comeback.
First-glimpse images of the re-appearing stripe are online at: http://www.nasa.gov/topics/solarsystem/features/jupiter20101124-i.html .
"The reason Jupiter seemed to 'lose' this band – camouflaging itself among the surrounding white bands – is that the usual downwelling winds that are dry and keep the region clear of clouds died down," said Glenn Orton, a research scientist at JPL. "One of the things we were looking for in the infrared was evidence that the darker material emerging to the west of the bright spot was actually the start of clearing in the cloud deck, and that is precisely what we saw."
A false-color composite image of Jupiter and its South Equatorial Belt shows an unusually bright spot, or outbreak, in this image made from data obtained by the W.M. Keck telescope in Hawaii on Nov. 11, 2010. This image was taken just two days after the initial discovery of the "outbreak." The bright "spot" in the South Equatorial Belt is the outbreak where winds are lofting particles to high altitudes. This white cloud deck is made up of white ammonia ice. When the white clouds float at a higher altitude, they obscure the missing brown material, which floats at a lower altitude. Every few decades or so, the South Equatorial Belt turns completely white for perhaps one to three years, an event that has puzzled scientists for decades. This extreme change in appearance has only been seen with the South Equatorial Belt, making it unique to Jupiter and the entire solar system.
The white band wasn't the only change on the big, gaseous planet. At the same time, Jupiter's Great Red Spot became a darker red color. Orton said the color of the spot – a giant storm on Jupiter that is three times the size of Earth and a century or more old – will likely brighten a bit again as the South Equatorial Belt makes its comeback.
The South Equatorial Belt underwent a slight brightening, known as a "fade," just as NASA's New Horizons spacecraft was flying by on its way to Pluto in 2007. Then there was a rapid "revival" of its usual dark color three to four months later. The last full fade and revival was a double-header event, starting with a fade in 1989, revival in 1990, then another fade and revival in 1993. Similar fades and revivals have been captured visually and photographically back to the early 20th century, and they are likely to be a long-term phenomenon in Jupiter's atmosphere.
A Close-Up Look of Jupiter in Infrared
This image is a composite of three color images taken on Nov. 16, 2010, by NASA's Infrared Telescope Facility in Mauna Kea, Hawaii. The images used to make the composite show three different parts of the infrared spectrum -- 4.85 microns (red), 4.00 microns (green) and 1.58 microns (blue). At 1.58 microns, scientists see sunlight reflected from Jupiter's main cloud deck – the same clouds they see in visible light. At 4.00 microns, scientists see sunlight reflected from higher-altitude particles well above the main deck. At 4.85 microns, scientists see thermal emission arising from the tops of Jupiter's clouds, with the hottest emissions coming from the deepest atmosphere and signifying regions with minimal overlying cloud cover.

The region just to the left of the center, and expanded in the insert, shows the area of the South Equatorial Belt with an unusually bright spot, or outbreak. The particles lofted by the initial outbreak are easily identified in green as high altitude particles at the upper right, with a second outbreak to the lower left. Between them, in red, is a region of clear atmosphere that shows up as a reddish color in the image. 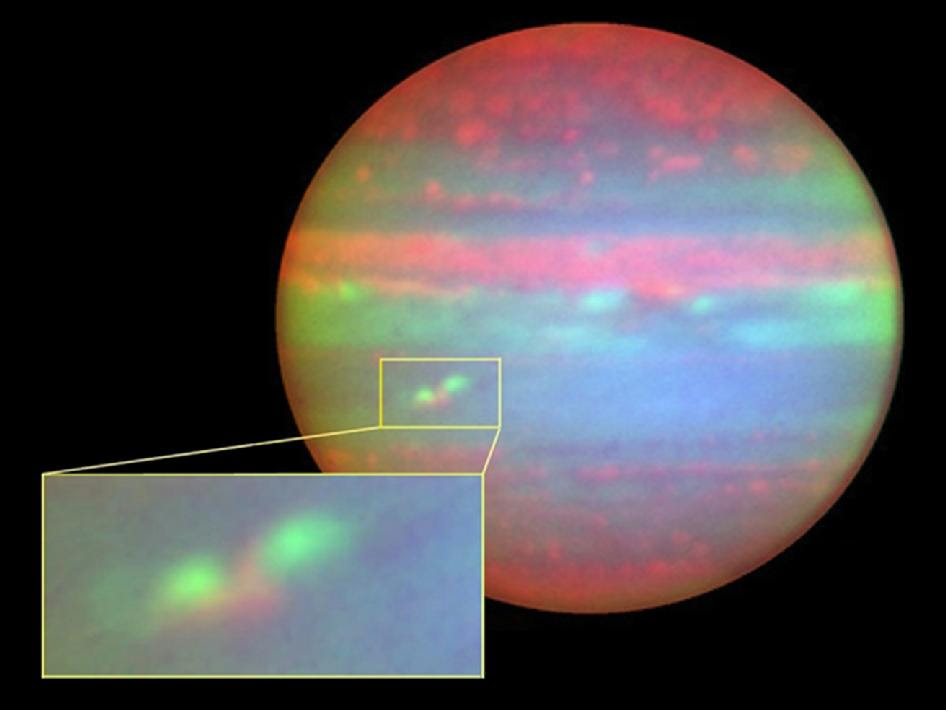 Scientists are particularly interested in observing this latest event because it's the first time they've been able to use modern instruments to determine the details of the chemical and dynamical changes of this phenomenon. Observing this event carefully may help to refine the scientific questions to be posed by NASA's Juno spacecraft, due to arrive at Jupiter in 2016, and a larger, proposed mission to orbit Jupiter and explore its satellite Europa after 2020.
The event also signifies another close collaboration between professional and amateur astronomers. The amateurs, located worldwide, are often well equipped with instrumentation and are able to track the rapid developments of planets in the solar system. These amateurs are collaborating with professionals to pursue further studies of the changes that are of great value to scientists and researchers everywhere.
"I was fortunate to catch the outburst," said Christopher Go, referring to the first signs that the band was coming back. "I had a meeting that evening and it went late. I caught the outburst just in time as it was rising. Had I imaged earlier, I would not have caught it," he said. Go, who also conducts in the physics department at the University of San Carlos, Cebu City, Philippines, witnessed the disappearance of the stripe earlier this year, and in 2007 he was the first to catch the stripe's return. "I was able to catch it early this time around because I knew exactly what to look for."
NASA's Exoplanet Science Institute at the California Institute of Technology in Pasadena manages time allocation on the Keck telescope for NASA. Caltech manages JPL for NASA.
Sources and contacts:
NASA
Priscilla Vega/Jia-Rui Cook
Jet Propulsion Laboratory, Pasadena, Calif.
on November 26, 2010