- 54 percent of malware is active for just 24 hours
PandaLabs, Panda Security's anti-malware laboratory, reported today that one-third of all malware in existence was created in the first 10 months of 2010. The average number of malware threats created every day, including new malware and variants of existing families, has risen from 55,000 in 2009 to 63,000 in 2010 - a rate increase of 14.5 percent. The research lab also revealed that the average lifespan of 54 percent of malware has been reduced to just 24 hours, compared to a lifespan of several months that was more common in previous years.
Panda's Collective Intelligence database, which automatically detects, analyzes and classifies 99.4 percent of the threats received, now has identified 134 million separate files, 60 million of which are malware (viruses, worms, Trojans and other threats). According to PandaLabs, 34 percent of all active malware threats were created in the first ten months of 2010. Approximately 20 million new strains of malware have been created already this year; the same total for the year of 2009 in its entirety.
A graph depicting malware growth 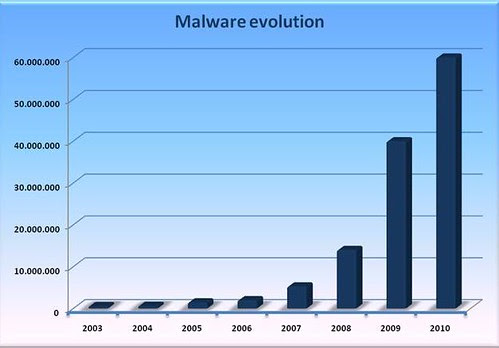 Credit: Panda Security/flickr
This shortened lifespan of malware and increased number of variants is proof of a significant shift in the cybercrime landscape: many malware variants are created to infect just a few systems before they disappear. As antivirus solutions become able to detect new malware more quickly, hackers modify them or create new ones so as to evade detection. The quickly changing malware strains make it incredibly important to have protection technologies such as Collective Intelligence, which can rapidly neutralize new malware and reduce the risk window to which users are exposed during these first 24 hours.
"Since 2003, new threats have increased at a rate of 100 percent or more. Yet so far in 2010, purely new malware has increased by only 50 percent, significantly less than the historical norm," said Luis Corrons, technical director of PandaLabs. "This doesn't mean that there are fewer threats or that the cyber-crime market is shrinking. On the contrary, it continues to expand, and by the end of 2010 we will have logged more new threats in Collective Intelligence than in 2009. It seems hackers are applying economies of scale, reusing old malicious code or prioritizing the distribution of existing threats over the creation of new ones."
For the latest research on malware and other security threats please visit www.pandalabs.com.
About PandaLabs
Since 1990, PandaLabs, the malware research division of Panda Security, has led the industry in detecting, classifying and protecting consumers and businesses against new cyber threats. At the core of the operation is Collective Intelligence, a proprietary system that provides real-time protection by harnessing Panda's community of users to automatically detect, analyze, classify and disinfect more than 63,000 new malware samples daily. The automated classification is complemented by a highly specialized global team of threat analysts, each focused on a specific type of malware, such as viruses, Trojans, worms, spyware and other exploits, to ensure around-the-clock protection. Learn more about PandaLabs and subscribe to the PandaLabs blog at http://www.pandalabs.com. Follow Panda on Twitter: http://twitter.com/Panda_Security and Facebook:http://www.facebook.com/PandaUSA.
SOURCE Panda Security
A graph depicting malware growth is available at http://www.flickr.com/photos/panda_security/5198720136/.
on November 26, 2010