A New Paradigm:? Project Pioneers Use Of Silicon-Germanium For Space Electronics Applications

A five-year project led by the Georgia Institute of Technology has developed a novel approach to space electronics that could change how space vehicles and instruments are designed. The new capabilities are based on silicon-germanium (SiGe) technology, which can produce electronics that are highly resistant to both wide temperature variations and space radiation.
Titled "SiGe Integrated Electronics for Extreme Environments," the $12 million, 63-month project was funded by the National Aeronautics and Space Administration (NASA). In addition to Georgia Tech, the 11-member team included academic researchers from the University of Arkansas, Auburn University, University of Maryland, University of Tennessee and Vanderbilt University. Also involved in the project were BAE Systems, Boeing Co., IBM Corp., Lynguent Inc. and NASA's Jet Propulsion Laboratory.
This close-up image shows a remote electronics unit 16-channel sensor interface, developed for NASA using silicon-germanium microchips by an 11-member team led by Georgia Tech.

Credit: Credit: Gary Meek
"The team's overall task was to develop an end-to-end solution for NASA – a tested infrastructure that includes everything needed to design and build extreme-environment electronics for space missions," said John Cressler, who is a Ken Byers Professor in Georgia Tech's School of Electrical and Computer Engineering. Cressler served as principal investigator and overall team leader for the project.
A paper on the project findings will appear in December in IEEE Transactions on Device and Materials Reliability, 2010. During the past five years, work done under the project has resulted in some 125 peer-reviewed publications.
Unique Capabilities
SiGe alloys combine silicon, the most common microchip material, with germanium at nanoscale dimensions. The result is a robust material that offers important gains in toughness, speed and flexibility.
That robustness is crucial to silicon-germanium's ability to function in space without bulky radiation shields or large, power-hungry temperature control devices. Compared to conventional approaches, SiGe electronics can provide major reductions in weight, size, complexity, power and cost, as well as increased reliability and adaptability.
"Our team used a mature silicon-germanium technology – IBM's 0.5 micron SiGe technology – that was not intended to withstand deep-space conditions," Cressler said. "Without changing the composition of the underlying silicon-germanium transistors, we leveraged SiGe's natural merits to develop new circuit designs – as well as new approaches to packaging the final circuits – to produce an electronic system that could reliably withstand the extreme conditions of space."
At the end of the project, the researchers supplied NASA with a suite of modeling tools, circuit designs, packaging technologies and system/subsystem designs, along with guidelines for qualifying those parts for use in space. In addition, the team furnished NASA with a functional prototype – called a silicon-germanium remote electronics unit (REU) 16-channel general purpose sensor interface. The device was fabricated using silicon-germanium microchips and has been tested successfully in simulated space environments.
Georgia Tech Professor John Cressler displays a functional prototype device developed for NASA using silicon-germanium microchips. The device, a 16-channel sensor interface, has been tested successfully in simulated space environments. 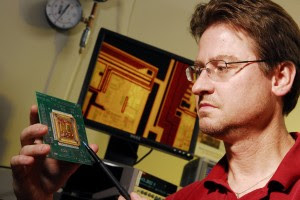 Credit:  Photo: Gary Meek
A New Paradigm
Andrew S. Keys, center chief technologist at the Marshall Space Flight Center and NASA program manager, said the now-completed project has moved the task of understanding and modeling silicon-germanium technology to a point where NASA engineers can start using it on actual vehicle designs.
"The silicon-germanium extreme environments team was very successful in doing what it set out to do," Keys said. "They advanced the state-of-the-art in analog silicon-germanium technology for space use – a crucial step in developing a new paradigm leading to lighter weight and more capable space vehicle designs."
Keys explained that, at best, most electronics conform to military specifications, meaning they function across a temperature range of minus- 55 degrees Celsius to plus-125 degrees Celsius. But electronics in deep space are typically exposed to far greater temperature ranges, as well as to damaging radiation. The Moon's surface cycles between plus-120 Celsius during the lunar day to minus-180 Celsius at night.
The silicon-germanium electronics developed by the extreme environments team has been shown to function reliably throughout that entire plus-120 to minus-180 Celsius range. It is also highly resistant or immune to various types of radiation.
The conventional approach to protecting space electronics, developed in the 1960s, involves bulky metal boxes that shield devices from radiation and temperature extremes, Keys explained. Designers must place most electronics in a protected, temperature controlled central location and then connect them via long and heavy cables to sensors or other external devices.
By eliminating the need for most shielding and special cables, silicon-germanium technology helps reduce the single biggest problem in space launches – weight. Moreover, robust SiGe circuits can be placed wherever designers want, which helps eliminate data errors caused by impedance variations in lengthy wiring schemes.
"For instance, the Mars Exploration Rovers, which are no bigger than a golf cart, use several kilometers of cable that lead into a warm box," Keys said. "If we can move most of those electronics out to where the sensors are on the robot's extremities, that will reduce cabling, weight, complexity and energy use significantly."
A Collaborative Effort
NASA currently rates the new SiGe electronics at a technology readiness level of six, which means the circuits have been integrated into a subsystem and tested in a relevant environment. The next step, level seven, involves integrating the SiGe circuits into a vehicle for space flight testing. At level eight, a new technology is mature enough to be integrated into a full mission vehicle, and at level nine the technology is used by missions on a regular basis.
Successful collaboration was an important part of the silicon-germanium team's effectiveness, Keys said. He remarked that he had "never seen such a diverse team work together so well."
Professor Alan Mantooth, who led a large University of Arkansas contingent involved in modeling and circuit-design tasks, agreed. He called the project "the most successful collaboration that I've been a part of."
Mantooth termed the extreme-electronics project highly useful in the education mission of the participating universities. He noted that a total of 82 students from six universities worked on the project over five years.
Richard W. Berger, a BAE Systems senior systems architect who collaborated on the project, also praised the student contributions.
"To be working both in analog and digital, miniaturizing, and developing extreme-temperature and radiation tolerance all at the same time – that's not what you'd call the average student design project," Berger said.
Miniaturizing an Architecture
BAE Systems' contribution to the project included providing the basic architecture for the remote electronics unit (REU) sensor interface prototype developed by the team. That architecture came from a previous electronics generation: the now cancelled Lockheed Martin X-33 Spaceplane initially designed in the 1990s.
In the original X-33 design, Berger explained, each sensor interface used an assortment of sizeable analog parts for the front end signal receiving section. That section was supported by a digital microprocessor, memory chips and an optical bus interface – all housed in a protective five-pound box.
The extreme environments team transformed the bulky X-33 design into a miniaturized sensor interface, utilizing silicon germanium. The resulting SiGe device weighs about 200 grams and requires no temperature or radiation shielding. Large numbers of these robust, lightweight REU units could be mounted on spacecraft or data-gathering devices close to sensors, reducing size, weight, power and reliability issues.
Berger said that BAE Systems is interested in manufacturing a sensor interface device based on the extreme environment team's discoveries.
Other space-oriented companies are also pursuing the new silicon-germanium technology, Cressler said. NASA, he explained, wants the intellectual-property barriers to the technology to be low so that it can be used widely.
"The idea is to make this infrastructure available to all interested parties," he said. "That way it could be used for any electronics assembly – an instrument, a spacecraft, an orbital platform, lunar-surface applications, Titan missions – wherever it can be helpful. In fact, the process of defining such an NASA mission-insertion road map is currently in progress."
Contacts and sources:
John Toon
Georgia Institute of Technology Research News
IEEE Transactions on Device and Materials Reliability
NASA
on November 30, 2010