The treatment of cancer has greatly improved in the last few decades, and according to the National Cancer Institute, the overall incidence has declined since 1999. Scientists are investigating new combined therapies to deliver cancer treatments that target only the tumor without damaging normal tissue


Bioengineer Rafael Davalos in his laboratory at Virginia Tech. 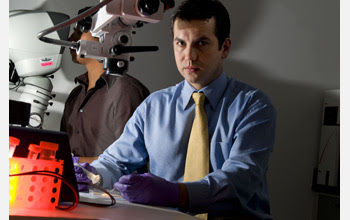 Despite these facts, most patients see the diagnosis of cancer as synonymous with a high probability of death and potentially drastic treatments including aggressive surgery, radiotherapy and chemotherapy, with severe side effects such as vomiting, hair loss, post-surgical deformation and many others that can seriously compromise one's quality of life.

In the last few years, scientists have been investigating new ways to deliver cancer treatments that can target only a tumor, without damaging normal tissue, and therefore decrease side effects.

One new therapy uses nanoparticles, such as carbon nanotubes (CNTs), for drug delivery. These are very small elements--a nanometer is one-billionth of a meter (10-9 m)--that can deliver high concentrations of medicines to the interior of cancer cells without affecting normal cells. The nanoparticles also increase the time a medicine stays inside a cell, compared with other therapies.

Another new therapy that has been used is non-thermal irreversible electroporation (N-TIRE). The principle behind this therapy has been known since 1898 as a method to treat bacteria-infested water, but it is now being used in the treatment of cancer. N-TIRE is the application of electrical fields to a targeted tissue area with the purpose of permanently opening pores in the membranes of a cell, causing cell death. The destruction of the cells in this case is not due to thermal injury--important since it allows the elimination of tumor cells while respecting normal tissue.

Rafael Davalos, a bioengineer at Virginia Polytechnic Institute and State University (Virginia Tech) and co-inventor of N-TIRE, is doing a study combining N-TIRE and CNTs. He is using N-TIRE to treat the tumor and CNTs to selectively target cancer cells inside a tumor and cancer cells that have already traveled throughout the body.

"The procedure is essentially done with two minimally invasive (~1 millimeter) electrodes placed into the targeted region," Davalos said, "delivering approximately 80 pulses to the site in about one minute. The pulses are high voltage, but low energy, so no significant heating occurs as a result of the procedure."

Lack of heat is important for structures such as nerves and major blood vessels, Davalos said, as this preserves the tissues and allows treatment of previously inoperable tumors. Although the procedure has sub-millimeter resolution, he adds, the injected nanoparticles improve targeting even further.

In general, most studies report minimal side effects in the treatment with N-TIRE, but there are some concerns about therapies with CNTs, since researchers have seen some effects such as excessive inflammatory response and formation of free radicals in some trials.

"N-TIRE can be safely used right now," Davalos said. "However, if we combine N-TIRE with another therapy, we need to be careful with the choice of nanoparticle to ensure no toxicity to the body."

N-TIRE was used for the first time in humans in 2008 for prostate cancer treatment, with good results. New trials are being conducted for lung, kidney, hepatic and other cancers.

Carbon nanotubes, theoretically, are very promising as a cancer therapy, but more research needs to be done to address toxicity.

"The combined therapy of CNTs plus N-TIRE can be used to treat any type of cancer including brain, prostate, kidney, liver and pancreatic, but is limited in that it is a focal technique," Davalos added. "In other words, only one 2-3 centimeter site can be treated at a given time. One of the objectives of the research is to increase the zone that can be treated using a single procedure."

As with any focal treatment, this combinatorial therapy will probably be used in conjunction with a conventional treatment, until its efficiency can be broadly demonstrated.

"This technique would most likely be used in conjunction with other therapies that are the standard of care," he said. "However, it can be used independently, and also can be used as a salvage therapy when other techniques are no longer effective."

This new combined therapy may offer a brighter future for patients suffering from cancer, using minimally invasive procedures to increase the quality of life and decrease the risk of metastasis.