The Music of Gravitational Waves, Can We Hear It? LISA May.

A team of scientists and engineers at NASA's Jet Propulsion Laboratory has brought the world one step closer to "hearing" gravitational waves -- ripples in space and time predicted by Albert Einstein in the early 20th century.
The research, performed in a lab at JPL in Pasadena, Calif., tested a system of lasers that would fly aboard the proposed space mission called Laser Interferometer Space Antenna, or LISA. The mission's goal is to detect the subtle, whisper-like signals of gravitational waves, which have yet to be directly observed. This is no easy task, and many challenges lie ahead.
The new JPL tests hit one significant milestone, demonstrating for the first time that noise, or random fluctuations, in LISA's laser beams can be hushed enough to hear the sweet sounds of the elusive waves.
This artist's concept shows the proposed LISA mission, which would consist of three distinct spacecraft, each connected by laser beams. It would be the first space-based mission to attempt the detection of gravitational waves -- ripples in space-time that are emitted by exotic objects such as black holes. 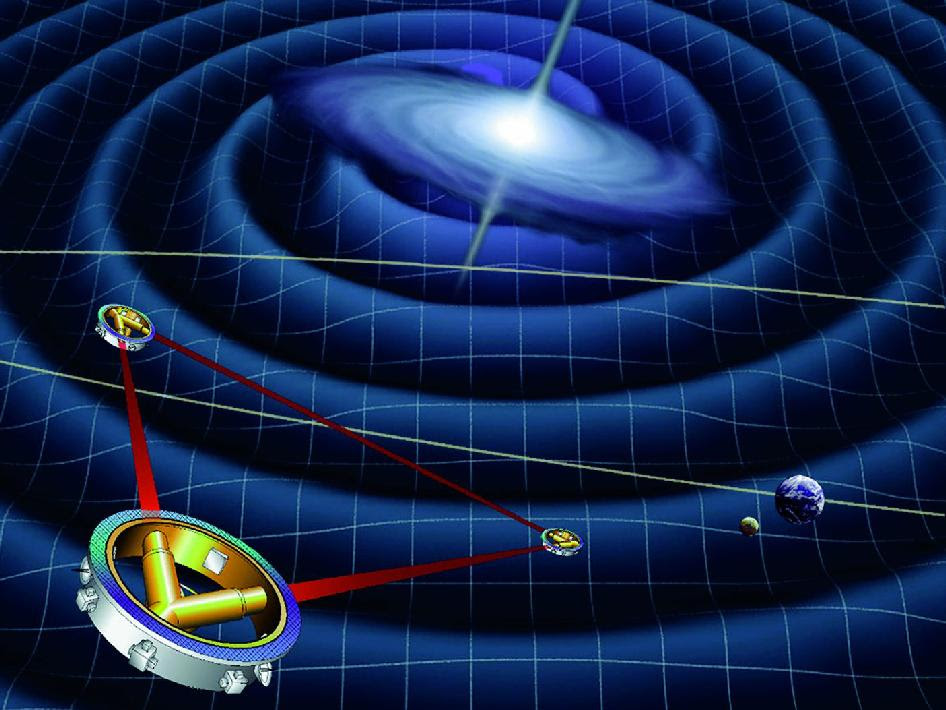 "In order to detect gravitational waves, we have to make extremely precise measurements," said Bill Klipstein, a physicist at JPL. "Our lasers are much noisier than what we want to measure, so we have to remove that noise carefully to get a clear signal; it's a little like listening for a feather to drop in the middle of a heavy rainstorm." Klipstein is a co-author of a paper about the lab tests that appeared in a recent issue of Physical Review Letters.
The JPL team is one of many groups working on LISA, a joint European Space Agency and NASA mission proposal, which, if selected, would launch in 2020 or later. In August of this year, LISA was given a high recommendation by the 2010 U.S. National Research Council decadal report on astronomy and astrophysics.
One of LISA's primary goals is to detect gravitational waves directly. Studies of these cosmic waves began in earnest decades ago when, in 1974, researchers discovered a pair of orbiting dead stars -- a type called pulsars -- that were spiraling closer and closer together due to an unexplainable loss of energy. That energy was later shown to be in the form of gravitational waves. This was the first indirect proof of the waves, and ultimately earned the 1993 Nobel Prize in Physics.
JPL researchers Glenn de Vine and Brent Ware with their LISA laser experiment. 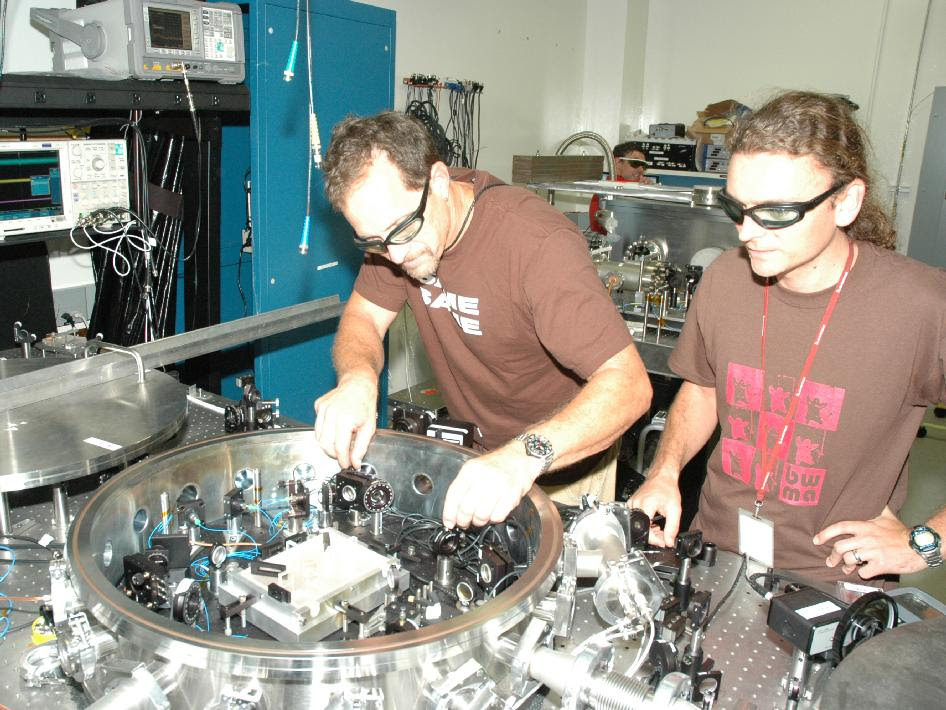 LISA is expected to not only "hear" the waves, but also learn more about their sources -- massive objects such as black holes and dead stars, which sing the waves like melodies out to the universe as the objects accelerate through space and time. The mission would be able to detect gravitational waves from massive objects in our Milky Way galaxy as well as distant galaxies, allowing scientists to tune into an entirely new language of our universe.
The proposed mission would amount to a giant triangle of three distinct spacecraft, each connected by laser beams. These spacecraft would fly in formation around the sun, about 20 degrees behind Earth. Each one would hold a cube made of platinum and gold that floats freely in space. As gravitational waves pass by the spacecraft, they would cause the distance between the cubes, or test masses, to change by almost imperceptible amounts -- but enough for LISA's extremely sensitive instruments to be able to detect corresponding changes in the connecting laser beams.
"The gravitational waves will cause the 'corks' to bob around, but just by a tiny bit," said Glenn de Vine, a research scientist and co-author of the recent study at JPL. "My friend once said it's sort of like rubber duckies bouncing around in a bathtub."
The JPL team has spent the last six years working on aspects of this LISA technology, including instruments called phase meters, which are sophisticated laser beam detectors. The latest research accomplishes one of their main goals -- to reduce the laser noise detected by the phase meters by one billion times, or enough to detect the signal of gravitational waves.
The job is like trying to find a proton in a haystack. Gravitational waves would change the distance between two spacecraft -- which are flying at 5 million kilometers (3.1 million miles) apart -- by about a picometer, which is about 100 million times smaller than the width of a human hair. In other words, the spacecraft are 5,000,000,000 meters apart, and LISA would detect changes in that distance on the order of .000000000005 meters!
At the heart of the LISA laser technology is a process known as interferometry, which ultimately reveals if the distances traveled by the laser beams of light, and thus the distance between the three spacecraft, have changed due to gravitational waves. The process is like combining ocean waves -- sometimes they pile up and grow bigger, and sometimes they cancel each other out or diminish in size.
"We can't use a tape measure to get the distances between these spacecraft," said de Vine, "So we use lasers. The wavelengths of the lasers are like our tick marks on a tape measure."
On LISA, the laser light is detected by the phase meters and then sent to the ground, where it is "interfered" via data processing (the process is called time-delay interferometry for this reason -- there's a delay before the interferometry technique is applied). If the interference pattern between the laser beams is the same, then that means the spacecraft haven't moved relative to each other. If the interference pattern changes, then they did. If all other reasons for spacecraft movement have been eliminated, then gravitational waves are the culprit.
That's the basic idea. In reality, there are a host of other factors that make this process more complex. For one thing, the spacecraft don't stay put. They naturally move around for reasons that have nothing to do with gravitational waves. Another challenge is the laser beam noise. How do you know if the spacecraft moved because of gravitational waves, or if noise in the laser is just making it seem as if the spacecraft moved?
This is the question the JPL team recently took to their laboratory, which mimics the LISA system. They introduced random, artificial noise into their lasers and then, through a complicated set of data processing actions, subtracted most of it back out. Their recent success demonstrated that they could see changes in the distances between mock spacecraft on the order of a picometer.
In essence, they hushed the roar of the laser beams, so that LISA, if selected for construction, will be able to hear the universe softly hum a tune of gravitational waves.
Other authors of the paper from JPL are Brent Ware; Kirk McKenzie; Robert E. Spero and Daniel A. Shaddock, who has a joint post with JPL and the Australian National University in Canberra.
LISA is a proposed joint NASA and European Space Agency mission. The NASA portion of the mission is managed by NASA's Goddard Space Flight Center, Greenbelt, Md. Some of the key instrumentation studies for the mission are being performed at JPL. The U.S. mission scientist is Tom Prince at the California Institute of Technology in Pasadena. JPL is managed by Caltech for NASA.
Contacts and sources:
Whitney Clavin
Jet Propulsion Laboratory, Pasadena, Calif.
on November 27, 2010