Molecular "machine" responsible for pulling chromosome copies apart is isolated and seen in action outside the cell During cell division, a huge molecular complex called the kinetochore and a microtubule attach themselves to each chromosome and pull to create two daughter cells. Researchers have recently isolated the kinetochore outside of the cell, and have been able to demonstrate its functions in vitro. Surprisingly, the more tension there is on the microtubule, the more stable the connection to the kinetochore, analogous to how a Chinese finger trap ensnares a finger tighter as one tries to pull it off harder and harder 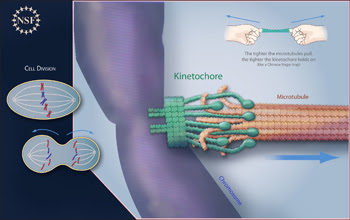 Credit: Zina Deretsky, National Science Foundation
The dance of cell division is carefully choreographed and has little room for error. Paired genetic information is lined up in the middle of the cell in the form of chromosomes. The chromosomes must then be carefully pulled apart so that the resulting daughter cells each have an identical copy of the mother cell's DNA.

The molecular machinery that shepherds and literally pulls the chromosomes apart consists of paired microtubules radiating from opposite poles of the dividing cell and an enormous, but precise, molecular complex called a kinetochore. This 'gentle giant' grabs onto a single special locus on the chromosome known as the centromere.

Paradoxically, the more tension on the microtubule, the tighter the grip of the kinetochore--analogous to the clever mechanism of a Chinese finger trap that grips a finger tighter, the more you try to pull it off. In fact, the proper amount of tension may be a clue to the cell that all is proceeding according to plan. In the absence of tension, the cell is alerted to damage or mutation such as cancer and will frequently self-destruct.

In another feat of molecular acrobatics and precision, as the microtubule draws the captured chromosome towards the pole, it is actually shortening by losing tubulin subunits. To make things a little more complicated, it is disassembling at the very point where the kintechore attaches. In other words: imagine pulling yourself up on a rope, but as you progress upwards, the end of the rope is disappearing right from under where you were last gripping it. This is what this deft mechanism is accomplishing. Because the kinetochore has many points of contact (like a sleeve, or like that very same Chinese handcuff) it is good at not letting go of the microtubule even as it disassembles away.

At 100 nanometers across, the kinetochore is a true behemoth. One of the most complicated functional molecules in the cell is a ribosome, but that only measures 25 nanometers across by comparison.

This perspective of molecular size and complexity should highlight what a true achievement it is that Bungo Akiyoshi (of the Fred Hutchinson Cancer Research Center, Seattle) and colleagues are reporting isolating the kinetochore outside of the cell and having it perform the same tasks in vitro that it is seen to undertake in vivo. They report their findings in the November 25 issue of Nature. The research was, in part, supported by a grant from the National Science Foundation.

Sue Biggins, who participated in the research, says "Purifying this molecule out of the cell is as exciting today, as seeing the ribosome was back over 50 years ago!"