Astronomers have caught sight of an unusual galaxy that has illuminated new details about a celestial "sandbar" connecting two massive islands of galaxies. The research was conducted in part with NASA's Spitzer Space Telescope.
These "sandbars," or filaments, are known to span vast distances between galaxy clusters and form a lattice-like structure known as the cosmic web. Though immense, these filaments are difficult to see and study in detail. Two years ago, Spitzer's infrared eyes revealed that one such intergalactic filament containing star-forming galaxies ran between the galaxy clusters called Abell 1763 and Abell 1770.
This diagram shows an unusual galaxy with bent jets (see callout). The galaxy was found with the help of NASA's Spitzer Space Telescope in a filament (purple area) connecting two massive islands of galaxies. The little dots in the diagram are other galaxies. The twin jets of material are bending backwards as they sweep through the hot gas in the filament. 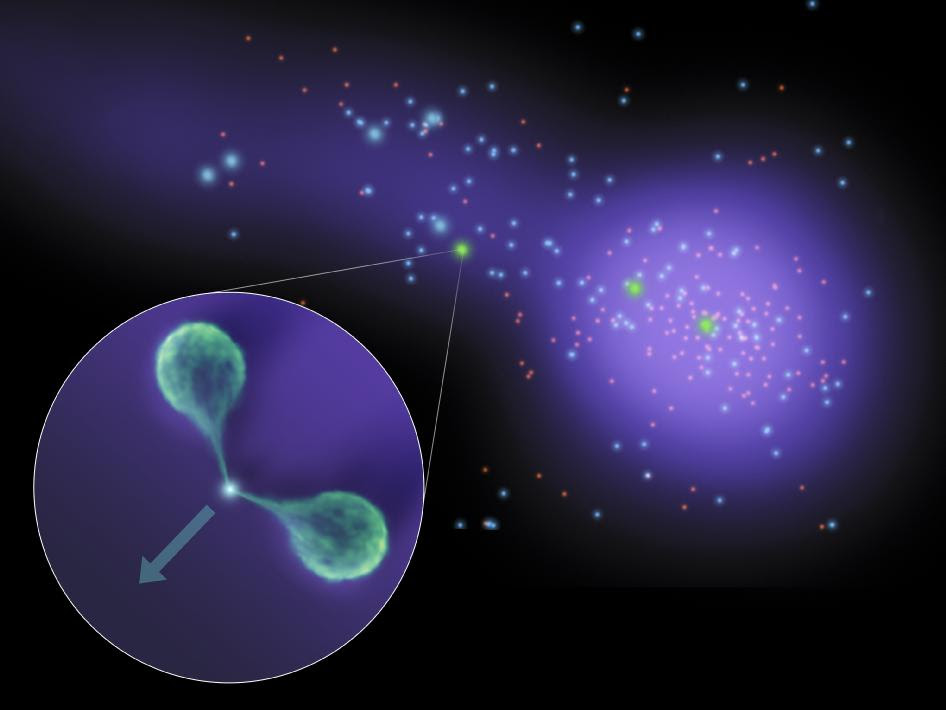 Now these observations have been bolstered by the discovery, inside this same filament, of a galaxy that has a rare boomerang shape and unusual light emissions. Hot gas is sweeping the wandering galaxy into this shape as it passes through the filament, presenting a new way to gauge the filament's particle density. Researchers hope that other such galaxies with oddly curved profiles could serve as signposts for the faint threads, which in turn signify regions ripe for forming stars.
"These filaments are integral to the evolution of galaxy clusters -- among the biggest gravitationally bound objects in the universe -- as well as the creation of new generations of stars," said Louise Edwards, a postdoctoral researcher at the California Institute of Technology in Pasadena, and lead author of a study detailing the findings in the Dec. 1 issue of the Astrophysical Journal Letters. Her collaborators are Dario Fadda, also at Caltech, and Dave Frayer from the National Science Foundation's National Radio Astronomy Observatory, based in Charlottesville, Virginia.
Blowing in the cosmic breeze
Astronomers spotted the bent galaxy about 11 million light-years away from the center of the galaxy cluster Abell 1763 during follow-up observations with the WIYN Observatory near Tucson, Ariz., and radio-wave observations by the Very Large Array near Socorro, N.M. The WIYN Observatory is named after the consortium that owns and operates it, which includes the University of Wisconsin, Indiana University, Yale University, and the National Optical Astronomy Observatories.
The galaxy has an unusual ratio of radio to infrared light, as measured by the Very Large Array and Spitzer, making it stand out like a beacon. This is due in part to the galaxy having twin jets of material spewing in opposite directions from a supermassive black hole at its center. These jets have puffed out into giant lobes of material that emit a tremendous amount of radio waves.
Edwards and her colleagues noticed that these lobes appear to be bent back and away from the galaxy's trajectory through the filament. This bow shape, the astronomers reasoned, is due to particles in the filament pushing on the gas and dust in the lobes.
By measuring the angle of the arced lobes, Edwards' team calculated the pressure exerted by the filaments' particles and then determined the density of the medium. The method is somewhat like looking at streamers on a kite soaring overhead to judge the wind strength and the thickness of the air.
According to the data, the density inside this filament is indeed about 100 times the average density of the universe. This value agrees with that obtained in a previous X-ray study of filaments and also nicely matches predictions of supercomputer simulations.
Interconnected superclusters
Galaxies tend to bunch together as great islands in the void of space, called galaxy clusters. These galaxy groupings themselves often keep company with other clusters in "superclusters" that loom as gargantuan, gravitationally associated walls of galaxies. These structures evolved from denser patches of material as the universe rapidly expanded after the Big Bang, some 13.7 billion years ago.
The clumps and threads of this primordial matter eventually cooled, and some of it has condensed into the galaxies we see today. The leftover gas is strewn in filaments between galaxy clusters. Much of it is still quite hot -- about one million degrees Celsius (1.8 million degrees Fahrenheit) -- and blazes in high-energy X-rays that permeate galaxy clusters. Filaments are therefore best detected in X-ray light, and one direct density reading of the strands has previously been obtained in this band of frequencies.
But the X-ray-emitting gas in filaments is much more diffuse and weak than in clusters, just as submerged sandbars are extremely hard to spot at sea compared to islands poking above the water. Therefore, obtaining quality observations of filaments is time-consuming with current space observatories.
The technique by Edwards and her colleagues, which uses radio frequencies that can reach a host of ground-based telescopes, points to an easier way to probe the interiors of galaxy-cluster filaments. Instead of laboring to find subtle X-rays clues, astronomers could trust these arced "lighthouse" galaxies to indicate just where cosmic filaments lie.
Knowing how much material these filaments contain and how they interact with galaxy clusters will be very important for understanding the overall evolution of the universe, Edwards said.
The Spitzer observations were made before it ran out of its liquid coolant in May 2009 and began its warm mission.
NASA's Jet Propulsion Laboratory, Pasadena, Calif., manages the Spitzer Space Telescope mission for NASA's Science Mission Directorate, Washington. Science operations are conducted at the Spitzer Science Center at Caltech, also in Pasadena. Caltech manages JPL for NASA. For more information about Spitzer, visit http://spitzer.caltech.edu/ and  http://www.nasa.gov/spitzer .
Contacts and sources:
Written by Adam Hadhazy
Whitney Clavin
Jet Propulsion Laboratory, Pasadena, Calif.
on November 27, 2010