NASA Identifies 1,142 Near Earth Objects That Are Potential Collision Hazards, 149 Larger Than One Kilometer Diameter

NASA is with charged the task of protecting the U.S. and the world from a deadly asteroid collision.

Current and Prospective Near-Earth Object (NEO) Detection Activities
NEOs are asteroids or comets whose orbits bring them within a set distance of the Earth,’ with a portion of these objects traveling sufficiently close to make an eventual collision a possibility. No NEO large enough to present a hazard is known to be on a collision course with the Earth, and the probability of an impact by such a NEO is extremely low.
Nevertheless, incidents of this nature have occurred in Earth’s geologic past, and our immediate neighborhood of the Solar System is continually showered by very small, non-hazardous objects. Indeed, a steady stream of these objects enters the Earth’s atmosphere on a daily basis, consisting mostly of dust-sized particles and estimated to total some 50 to 150 tons each day. Thus, however remote it may be, the possibility of a future collision involving a more hazardous object should not be ignored.  In general terms, this distance is equivalent to about one-third the average distance of the Earth from the Sun.
Any strategy for addressing the potential hazard of a future NEO impact depends in the first instance on the detection, precision tracking, and characterization of potentially hazardous space objects. However, there are several challenges involved in first finding NEOs that are coming toward the Earth, and then determining whether a collision is likely. Such a determination is contingent upon factors such as the distance, size, orbit, and reflectivity of these objects, as well as the number and capabilities of the telescopes that are involved in the search. This is further complicated by the prospect that the orbits of known objects can be changed by gravitational or solar radiation perturbations, or even collisions with other objects, meaning that periodic monitoring of known NEOs must also be conducted.
Against this backdrop, Congress has provided direction to NASA to pursue enhanced NEO detection activities in various pieces of legislation, including most recently in the 2005 NASA Authorization Act (in a section labeled The George E. Brown, Jr. Near-Earth Object Survey Act), wherein NASA is directed to detect, track, catalogue, and characterize 90 percent of all NEOs with a diameter of 140 meters or greater by 2020. Earlier Congressional direction in 1998 tasked NASA with locating at least 90 percent of all NEOs with a diameter of one kilometer or greater (i.e., those judged by many experts to have the potential to threaten civilization) within ten years.
In pursuit of these Congressionally-directed goals, NASA currently sponsors various activities relating to the search for NEOs, including the international Minor Planet Center (MPC), located at the Harvard-Smithsonian Center for Astrophysics and operating under the auspices of the International Astronomical Union, for the collection and correlation of NEO orbit data; research at two radio telescope facilities to help provide precision tracking and characterization of NEOs; surveys conducted by ground-based optical telescopes; and NASA’s NEO Program Office at the Jet Propulsion Laboratory (JPL) for the overall coordination of these efforts and assessments of NEO orbits and impact probabilities.
There are also cooperative projects among NASA, the National Science Foundation (NSF, which has a key role within the United States for ground-based astronomical assets), and the U.S. Air Force (USAF), as well as non-government academic and space research organizations. Within this latter category, an important international collaboration exists with the University of Pisa’s NEO Dynamic Site in Italy, which performs high-precision orbit determination and trajectory prediction in parallel with NASA’s NEO Program Office, allowing analyses from these two organizations to be independently compared and cross-checked.
With respect to the Congressional direction to identify 90 percent of the objects that are one kilometer or greater in diameter, NASA advises that it is now closing in on that objective after twelve years of conducting surveys (updates are provided on the NEO Program website).  As of October 1, 2010, search teams have discovered 903 of these objects (out of an estimated total population of 1,050 NEOs that are one kilometer or larger in diameter) and have determined that only 149 of these objects are in orbits that could ever pose a collision hazard with the Earth -- with none presenting a threat of impact on Earth within the next century. NASA anticipates reaching the 90 percent detection goal for this category of NEOs by the end of
2010.
More generally, this twelve-year search effort has increased the total number of known NEOs from 499 to 7,319, of which 1,142 are thought to be traveling in potentially hazardous orbits (including the 149 objects larger than one kilometer in diameter mentioned above and 993 objects smaller than one kilometer). This represents genuine and notable progress (see Figure 1).
Figure 1. Cumulative history of all NEA discoveries 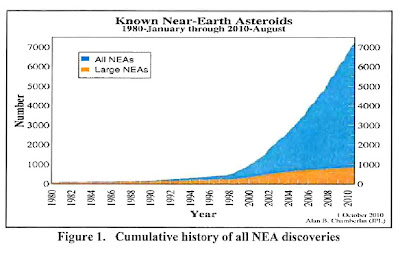 NASA notes that a large number of the NEOs predicted to exist still remain undiscovered, and many of these could present a potential future hazard to the Earth. To help illustrate this point using the data provided above, 6,416 of the NEOs detected thus far are smaller than one kilometer in diameter, including the 993 objects in this category that are traveling in potentially hazardous orbits.
However, the latest estimates for the total population of NEOs below one kilometer in size indicate that these 6,416 known objects represent less than five percent of the total number of NEOs projected in this size category (see Figure 2 for a depiction of the status of detection efforts for various size categories). Thus, based upon simple probability, it seems quite likely that there are more than 993 objects of this smaller size traveling in orbits potentially hazardous to the Earth.
Figure 2. Known Near-Earth Asteroids January1980 through August 2010 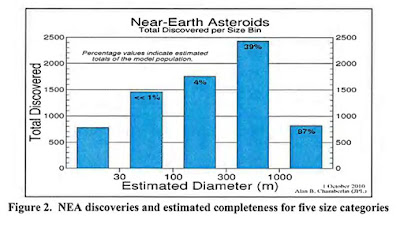