Artificial Bone Made in Laboratory for First Time

Researchers at Eindhoven University of Technology (TU/e) have for the first time succeeded in mimicking the process of bone formation in the laboratory, and in visualizing the process in great detail. The results will be published in the December edition of the scientific journal Nature Materials.

Bone formation
Bone consists of fibers of collagen in which calcium phosphate is deposited in the form of nanocrystals. The team of dr. Nico Sommerdijk (Department of Chemical Engineering and Chemistry) consisting of researchers from TU/e and the University of Illinois was able, in the laboratory, to mimic the growth of calcium phosphate inside the collagen, just as it happens in the human body.

Template
For a long time it was thought that collagen was only a template for the deposition of calcium phosphate, and that bone formation was controlled by specialized biomolecules. However, the images taken by the Eindhoven researchers show that the collagen fibers themselves control the mineral formation process and thereby direct bone formation. The biomolecules have proved to have a different role in the mineralization process: they keep the calcium phosphate in solution until mineral growth starts. An animation explaining the process can be viewed on YouTube (see url below).

Frozen
The team visualized this process using a unique electron microscope, the cryoTitan. This microscope allowed the researchers to investigate samples that were very rapidly frozen, so that the process could be arrested and viewed in steps. The cryoTitan has an extremely high resolution, and can even distinguish single atoms.

New implants
An Italian research institute (ISTEC) is already developing new bone implants based on the knowledge gained by Sommerdijk and his post-doc Fabio Nudelman. Sommerdijk’s group does not intend to take this step towards production: “We have taken a big step forwards in the area of bone formation, but our interest is in understanding, not production.” 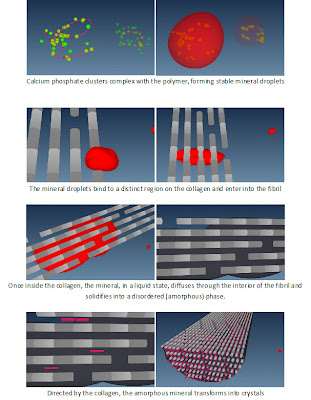 New direction
The newly gained knowledge about bone formation has opened the door to a new research area for Sommerdijk’s group. He is confident that the same principles can be used to make various kinds of nanomaterials. Sommerdijk and Nudelman are starting with magnetite, a magnetic material that can be used as biomarker or for data storage. But their ambitions go even further. “I am seriously convinced that we can make all kinds of materials using these principles”, says Sommerdijk. He is very enthusiastic about the new research direction. “The biomimetic formation of magnetic materials is a new area that is still completely unexplored.”

Netherlands Organization of Scientific Research
Early this year Sommerdijk was awarded a prestigious Vici grant by NWO (Netherlands Organisation for Scientific Research). Vici grants are given to scientists who have successfully demonstrated the ability to develop their own innovative lines of research. The grant amounts to 1.5 million euro for 5 years. Sommerdijk has already received a NWO Vidi grant in 2003.

Nature Materials
The paper describing the results is available on the Nature Materials website from 24 October, and will be published in the Deceber edition of the journal.