New Map Offers A Global View Of Health-Sapping Air Pollution; Cause of 60,000 Deaths a Year in US

In many developing countries, the absence of surface-based air pollution sensors makes it difficult, and in some cases impossible, to get even a rough estimate of the abundance of a subcategory of airborne particles that epidemiologists suspect contributes to millions of premature deaths each year. The problematic particles, called fine particulate matter (PM2.5), are 2.5 micrometers or less in diameter, about a tenth the fraction of human hair. These small particles can get past the body's normal defenses and penetrate deep into the lungs.
To fill in these gaps in surface-based PM2.5 measurements, experts look toward satellites to provide a global perspective. Yet, satellite instruments have generally struggled to achieve accurate measurements of the particles in near-surface air. The problem: Most satellite instruments can't distinguish particles close to the ground from those high in the atmosphere. In addition, clouds tend to obscure the view. And bright land surfaces, such as snow, desert sand, and those found in certain urban areas can mar measurements.
Global satellite-derived map of PM2.5 averaged over 2001-2006. 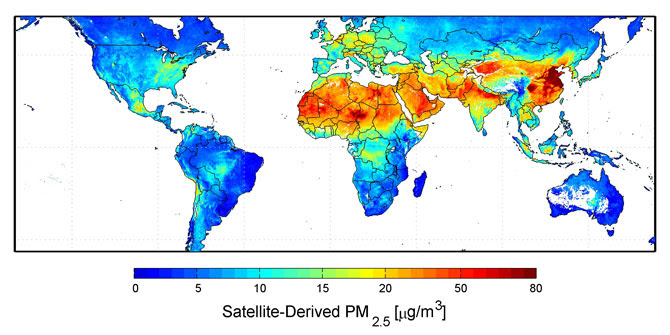 Credit: Dalhousie University, Aaron van Donkelaar
However, the view got a bit clearer this summer with the publication of the first long-term global map of PM2.5 in a recent issue of Environmental Health Perspectives. Canadian researchers Aaron van Donkelaar and Randall Martin at Dalhousie University, Halifax, Nova Scotia, Canada, created the map by blending total-column aerosol amount measurements from two NASA satellite instruments with information about the vertical distribution of aerosols from a computer model.
Their map, which shows the average PM2.5 results between 2001 and 2006, offers the most comprehensive view of the health-sapping particles to date. Though the new blending technique has not necessarily produced more accurate pollution measurements over developed regions that have well-established surface-based monitoring networks, it has provided the first PM2.5 satellite estimates in a number of developing countries that have had no estimates of air pollution levels until now.
U.S. satellite-derived map of PM2.5averaged over 2001-2006. 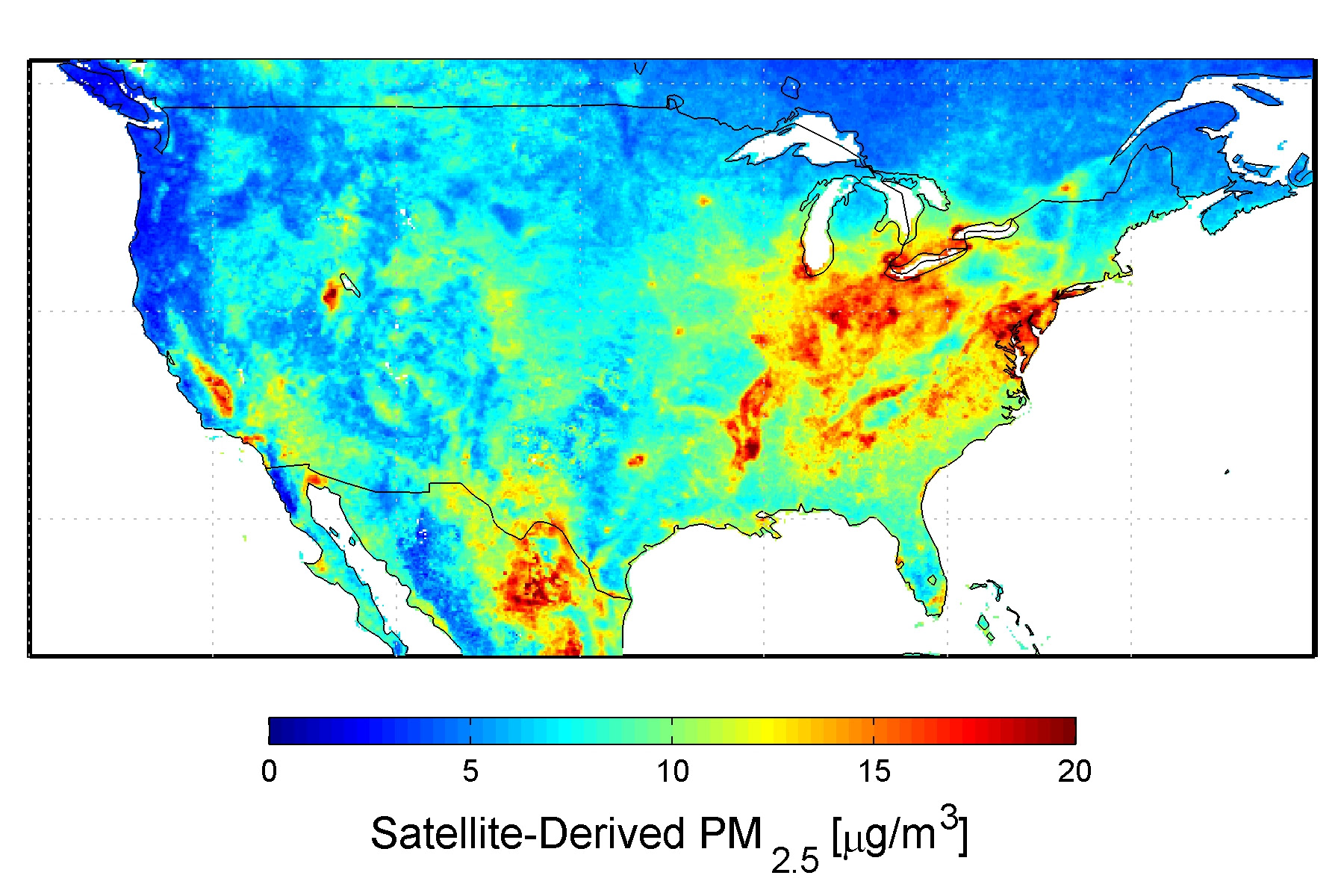 Credit: Dalhousie University, Aaron van Donkelaar
The map shows very high levels of PM2.5 in a broad swath stretching from the Saharan Desert in Northern Africa to Eastern Asia. When compared with maps of population density, it suggests more than 80 percent of the world's population breathe polluted air that exceeds the World Health Organization's recommended level of 10 micrograms per cubic meter. Levels of PM2.5 are comparatively low in the United States, though noticeable pockets are clearly visible over urban areas in the Midwest and East.
"We still have plenty of work to do to refine this map, but it's a real step forward," said Martin, one of the atmospheric scientists who created the map."We hope this data will be useful in areas that don't have access to robust ground-based measurements."
Animation, based on data from the Goddard Chemistry Aerosol and Transport model, simulates the global movement of black carbon soot from August 1, 2009 to November 19, 2009. Black carbon is shown in white. 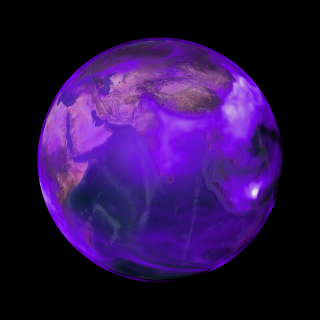 Take a deep breath. Even if the air looks clear, it's nearly certain you've inhaled millions of PM2.5 particles. Though often invisible to humans, such particles are present everywhere in Earth's atmosphere, and they come from both natural and human sources. Researchers are still working to quantify the precise percentage of natural versus human-generated PM2.5, but it's clear that both types contribute to the hotspots that show up in the new map.
Wind, for example, lifts large amounts of mineral dust aloft in the Arabian and Saharan deserts. In many heavily urbanized areas, such as eastern China and northern India, power plants and factories that burn coal lack filters and produce a steady stream of sulfate and soot particles. Motor vehicle exhaust also creates significant amounts of nitrates and other particles. Both agricultural burning and diesel engines yield dark sooty particles scientists call black carbon.
Human-generated particles often predominate in urban air -- what most people actually breathe -- and these particles trouble medical experts the most, explained Arden Pope, an epidemiologist at Brigham Young University, Provo, Utah and one of the world's leading experts on the health impacts of air pollution. That's because the smaller PM2.5 particles evade the body defenses—small hair-like structures in the respiratory tract called cilia and hairs in our noses—that do a reasonably good job of clearing or filtering out the larger particles.
Haze hugged the southern face of the Himalaya in mid-December 2009. The Moderate Resolution Imaging Spectroradiometer (MODIS) on NASA’s Aqua satellite captured this true-color image on December 14. Credit: NASA/Goddard/MODIS
For more info on this image, visit the Earth Observatory.
Small particles can make their way deep into human lungs and some ultrafine particles can even enter the bloodstream. Once there, they can spark a whole range of diseases including asthma, cardiovascular disease, and bronchitis. The American Heart Association estimates that in the United States alone, PM2.5 air pollution spark some 60,000 deaths a year.
Though PM2.5 as a class of particle clearly poses health problems, researchers have had less success assigning blame to specific types of particles. "There are still big debates about which type of particle is the most toxic," said Pope. "We're not sure whether it's the sulfates, or the nitrates, or even fine dust that's the most problematic."
One of the big sticking points: PM2.5 particles frequently mix and create hybrid particles, making it difficult for both satellite and ground-based instruments to parse out the individual effects of the particles.
The Promise of Satellites and PM2.5
The new map, and research that builds upon it, will help guide researchers who attempt to address this and a number of other unresolved questions about PM2.5. The most basic: how much of a public health toll does air pollution take around the globe? "We can see clearly that a tremendous number of people are exposed to high levels of particulates," said Martin. "But, so far, nobody has looked at what that means in terms of mortality and disease. Most of the epidemiology has focused on developed countries in North America and Europe."
Now, with this map and dataset in hand, epidemiologists can start to look more closely at how long term exposure to particulate matter in rarely studied parts of the world – such as Asia's fast-growing cities or areas in North Africa with quantities of dust in the air – affect human health. The new information could even be useful in parts of the United States or Western Europe where surface monitors, still the gold standard for measuring air quality, are sparse.
In addition to using satellite data from NASA's Multi-angle Imaging SpectroRadiometer (MISR) that flies on NASA's Terra satellite and the Moderate Resolution Imaging Spectroradiometer (MODIS) instrument that flies on both NASA's Aqua and Terra satellites, the researchers used output from a chemical transport model called GEOS-Chem to create the new map.
However, the map does not represent the final word on the global distribution of PM2.5, the researchers who made it emphasize. Although the data blending technique van Donkelaar applied provides a clearer global view of fine particulates, the abundance of PM2.5 could still be off by 25 percent or more in some areas due to remaining uncertainties, explained Ralph Kahn, an expert in remote sensing from NASA's Goddard Space Flight Center in Greenbelt, Md. and one of the coauthors of the paper.
To improve understanding of airborne particles, NASA scientists have plans to participate in numerous upcoming field campaigns and satellite missions. NASA Goddard, for example, operates a global network of ground-based particle sensors called AERONET that site managers are currently working to enhance and expand. And, later next year, scientists from Goddard's Institute for Space Studies (GISS) in New York will begin to analyze the first data from Glory, a satellite that carries an innovative type of instrument—a polarimeter—that will measure particle properties in new ways and complement existing instruments capable of measuring aerosols from space.
"We still have some work to do in order to realize the full potential of satellite measurements of air pollution," said Raymond Hoff, the director of the Goddard Earth Science and Technology Center at the University of Maryland-Baltimore County and the author of a comprehensive review article on the topic published recently in the Journal of the Air & Waste Management Association. "But this is an important step forward."
Contacts and Sources”
NASA news release written by Adam Voiland
NASA's Earth Science News Team
http://www.nasa.gov/topics/earth/features/health-sapping.html
on September 23, 2010