University of Southern Mississippi scientists recently imitated Mother Nature by developing, for the first time, a new, skinny-molecule-based material that resembles cilia, the tiny, hair-like structures through which organisms derive smell, vision, hearing and fluid flow.
While the new material isn't exactly like cilia, it responds to thermal, chemical, and electromagnetic stimulation, allowing researchers to control it and opening unlimited possibilities for future use.
Cilia occur on a variety of cells and unicellular organisms in nature. They primarily help collect sensory information, or produce mechanical responses that help single-celled and simple multicellular organisms spontaneously move about. For the first time, researchers have created artificial cilia. These cilia respond to changes in temperature, electromagnetic radiation and acidity by collapsing and fluorescing blue. As the environment changes back to its original state, the cilia go back to their previous state as well. 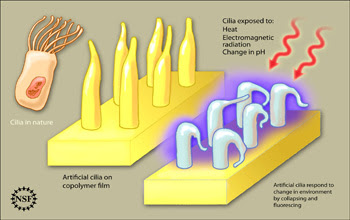 This finding is published in today's edition of the journal Advanced Functional Materials. The National Science Foundation's Division of Materials Research supports Southern Miss's Materials Research Science and Engineering Center for Response-Driven Polymeric Materials, where the research took place.
Cilia are wavy, hair-like structures that extend outward from the surfaces of various organisms such as human skin. People, animals and single-celled organisms use them to sense the environment, gather information about it and adapt to it.
Scientists long imagined what could be done if they could engineer cilia for other organic and nonorganic uses. But creating them solely belonged to the life nurturing processes of nature, until now. Marek Urban, Southern Miss professor of polymer science and engineering, along with a team of researchers, developed a new thin copolymer film with whisker-like formations that mimics Mother Nature.
"Our interest is in developing materials with multi-level responses at various length and time scales," said Urban. "I believe this is the future of science and engineering that will drive future technologies."
Employing a process used for years to produce latex paints, the researchers formed thin copolymer-based films whose chemical composition makes possible filaments that have built-in molecular sensors that respond to temperature, acidity and ultraviolet radiation. Moreover, the filaments are capable of locomotion, waving, shrinking and expanding in response to stimuli. They also are capable of fluorescence, that is, absorbing and emitting light and changing colors as a reaction to ultraviolet rays.
The ability to engineer this cilia-like biosensor may give scientists an ability to, for example, test for the presence of toxins, oxygen or even lack of oxygen in an environment. Future opportunities for sensor use might include developing new sensors for testing glucose levels, using the sensors for drug testing, or testing for air or water safety.
There is no limit to dreaming up applications for such a material, said Urban. "Many new ideas are being generated as we speak, but it is too early to reveal them."
Immediate next steps will be to team up engineers to make use of the materials.
Former Southern Miss graduate students Fang Liu, who now works with Proctor and Gamble, and research associate Dhanya Ramachandran contributed to this research.
Sources and contacts:
NSF news release
Bobbie Mixon, NSF
Thomas P. Rieker, NSF
Principal Investigators
Marek W. Urban, The University of Southern Mississippi
Related Websites
Advanced Functional Materials: Colloidal Films That Mimic Cilia: http://onlinelibrary.wiley.com/doi/10.1002/adfm.201000379/pdf
on September 26, 2010