In the first independent paper on the volume of the Gulf oil spill, scientists have affirmed heightened estimates of what is now seen as the largest marine oil accident ever. Using a new technique to analyze underwater video of the well riser, they say it leaked 56,000-68,000 barrels daily -- maybe more -- until it was capped. Their estimate of total oil escaped into the ocean is 4.4 million barrels -- close to the most recent consensus of government advisors.
Flow from the damaged well June 3, 2010, overlain by image velocity field computed by optical plume velocimetry 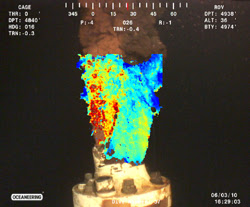 BP’s leaking oil well in the Gulf of Mexico was conclusively sealed this week, but even now, questions remain about the amount of oil that actually came out of it. Initially after the April 20 explosion, officials claimed that the flow could not be measured. Then, as public pressure for information mounted, they looked for ways to measure it, and started producing estimates: at first, 1,000 barrels a day; then 5,000; then 12,000 to 19,000; then upward from there.
Now, in the first independent, peer-reviewed paper on the leak’s volume, scientists have affirmed heightened estimates of what is now acknowledged as the largest marine oil accident ever. Using a new technique to analyze underwater video of the well riser, they say it leaked some 56,000 to 68,000 barrels daily--maybe more--until the first effective cap was installed, on July 15. Their estimate of the total oil escaped into the open ocean is some 4.4 million barrels--close to the most recent consensus of government advisors, whose methods have not been detailed publicly. The paper appears in this week’s early online edition of the leading journal Science.
"We wanted to do an independent estimate because people had the sense that the numbers out there were not necessarily accurate," said lead author Timothy Crone, a marine geophysicist at Columbia University's Lamont-Doherty Earth Observatory. After BP and government officials downplayed the possibility or importance of measurements, a wide spectrum of scientists, environmental groups and legal experts pointed out that the information was needed to determine both short- and long-term responses, and monetary liability.
The new study divides the flow rate into two periods: April 22 to June 3, when oil spurted from a jagged break in the riser; and after June 3, when the riser was cut, and oil temporarily spewed into the ocean unimpeded. Crone and his coauthor, Lamont marine geophysicist Maya Tolstoy, used a visual analysis technique
Crone recently developed called optical plume velocimetry. They say video from the earlier period indicated a flow of about 56,000 barrels a day (a barrel is 42 gallons). After the pipe was cut, they say, the rate went to about 68,000. After accounting for time elapsed, the authors subtracted 804,877 barrels collected by BP at the site, to come up with a total of 4.4 million barrels that escaped. Given the study's stated 20 percent margin of error plus or minus, this roughly agrees with the federal government's Flow Rate Technical Group's most recent comparable estimate of 4.1 million barrels (after subtracting the oil collected by BP).
ttempts to get a handle on the size of the release have been fraught with high-profile problems. A week after the initial 1,000-barrel-a-day assertion, it became apparent that BP was collecting more than that, and far more beside was escaping. On April 28, the National
VIDEO: This is a video used by the researchers to analyze the oil flow.
Oil Flow from the Deepwater Horizon from Earth Institute on Vimeo.

Oil Flow from the Deepwater Horizon from Earth Institute on Vimeo.


Credit:  Earth Institute on Vimeo http://vimeo.com/15061942
Oceanic and Atmospheric Administration hastily produced an estimate of 5,000 barrels, extrapolating this from the size of the surface plume. But scientists and journalists soon attacked this figure (for instance in a May 13 New York Times report). Crone became involved when National Public Radio asked him and other experts to come up with their own estimates; a May 14 NPR story based on their observations suggested that the rate was actually five or ten times higher.
On May 21, the Times published an op-ed piece by Crone and colleagues from three other institutions outlining the case that existing scientific techniques could be used to form a realistic picture. On May 27, the government raised the estimate again, to 12,000-19,000 barrels per day. A variety of techniques went into this and the later, even higher, official estimates, but the government and its advisors have released only limited information on their techniques—again, raising criticism from the scientific community . This new study is the first to lay out the details of an analysis publicly in a report independently reviewed by other researchers.
Crone started developing optical plume velocimetry in 2006, in order to study natural hydrothermal vents—volcanically driven cracks and holes in the seafloor that shoot out buoyant, superheated jets of mineral-laden water. A jet from a leaking oil pipe is similar. The technique uses high-resolution video from underwater cameras to track the motion of turbulent billows and flows in the water, breaking down the movement pixel by pixel. Under a grant from the U.S. National Science Foundation, Crone tested it first in the lab, then at deep-sea vents in the eastern Pacific, and the Juan de Fuca ridge, off the U.S. Pacific northwest. He is currently developing a network of automatic cameras that will track vent activity on the Juan de Fuca. "This is a great example of how basic research that doesn't seem to have any immediate value suddenly gains huge immediacy for society," said Crone.
The scientists say their study is just a start. Other researchers have been trying to get at the same question using separate visual and acoustic techniques. Crone and Tolstoy say their conclusions rest on just a few short clips of high-resolution video—almost all that has been released by BP and the government so far, and made available by members of Congress to the scientists. (A live publicly accessible webcam showing the leak as it continued week after week had extremely low resolution, insufficient for analysis.) The researchers point out that the flows could have varied day to day.
And, the analysis did not include video of several other leaks from smaller holes further up the pipe, which are thought to have grown with time; thus, the true figures may be larger, if anything, said Crone. "We clearly acknowledge the limits of our technique; we're unlikely to ever know the exact figure," he said. Tolstoy added: "This is not the last word. It is the first peer-reviewed word. But we think it's a really good ballpark."
The researchers said they hope they and others will be able to refine their estimates if the government and BP release more video and other information to independent researchers. Ian MacDonald, a Florida State University oceanographer who has also studied the leak, but was not involved in the study, said: "This is a welcome paper in that it opens the door onto how the oil spill flow-rate estimates have been calculated. It provides a transparency of method and a foundation for peer review for what has until now been a confusing and uncertain process."
The Earth Institute, Columbia University mobilizes the sciences, education and public policy to achieve a sustainable earth. Through interdisciplinary research among more than 500 scientists in diverse fields, the Institute is adding to the knowledge necessary for addressing the challenges of the 21st century and beyond. With over two dozen associated degree curricula and a vibrant fellowship program, the Earth Institute is educating new leaders to become professionals and scholars in the growing field of sustainable development. We work alongside governments, businesses, nonprofit organizations and individuals to devise innovative strategies to protect the future of our planet.
Lamont-Doherty Earth Observatory, a member of The Earth Institute, is one of the world's leading research centers seeking fundamental knowledge about the origin, evolution and future of the natural world. More than 300 research scientists study the planet from its deepest interior to the outer reaches of its atmosphere, on every continent and in every ocean. From global climate change to earthquakes, volcanoes, nonrenewable resources, environmental hazards and beyond, Observatory scientists provide a rational basis for the difficult choices facing humankind in the planet's stewardship.
Contacts and sources:
Kevin Krajick
The Earth Institute at Columbia University news release
Timothy Crone
Maya Tolstoy
Kevin Krajick, Earth Institute
Related links:
Watch video analyzed by the researchers: http://www.earth.columbia.edu/videos/watch/259
More information and video on optical plume velocimetry:  http://www.fluidcontinuity.org/research/opv/
Ongoing Earth Institute research into the spill's physical/ecological impacts: http://blogs.ei.columbia.edu/2010/07/27/earth-institute-scientists-drill-into-the-oil-spill/
Earth Institute-related articles on the spill: http://blogs.ei.columbia.edu/2010/06/09/getting-under-the-surface/
The paper, "Magnitude of the 2010 Gulf of Mexico Oil Leak," is available from Earth Institute, or Science.
on September 24, 2010