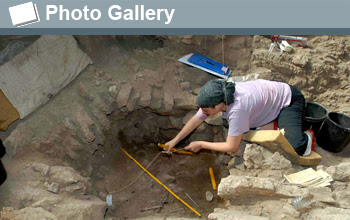 Some 14,500 to 11,500 years before the present, the Natufian people occupied the area around Karmiel, near the Mediterranean Sea. They lived there during the region's pre-Neolithic period, which marked the end of the very long Stone Age period.
"Feasting [...] is one of humanity's most universal and unique social behaviors," the researchers write in their report published in the Aug. 30 early online edition of Proceedings of the National Academy of Sciences.
"Our paper documents the first good evidence for feasting in the archaeological record that we know of," said Munro. She said that although many researchers believe feasting likely began with the emergence of modern humans, compelling supporting proofs have not been found.
A structure at Hilazon Tachtit Cave, Israel, contained the remains from at least three aurochs (wild cattle) that were consumed by humans as part of a feast. 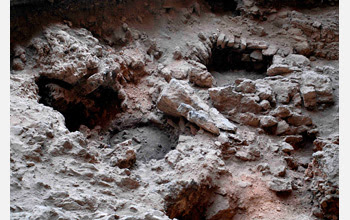 Detection of feasting nearly 12,000 years ago may signal important culture changes.  The Natufian people were the first to settle into more or less permanent communities and the act of settling would have been a time of social and economic upheaval.
Prior to this, populations were more mobile and could separate into smaller groups for food and other resources to deal with disputes.  But, settling down probably strained social relationships.
The researchers theorize that feasts may have played a significant role in easing the potentially rocky transition from a hunting-gathering lifestyle to one of agricultural dependency.
"Sedentary communities require other means to resolve conflict, smooth tensions and provide a sense of community," said Munro. "We believe that feasts, especially in funerary contexts, served to integrate communities by providing this sense of community."
Funerals may have provided special opportunities to bring communities together to mark the last event in a person's life and send the deceased off to another life. Instilled with additional layers of spiritual meaning, they may have provided an opportunity to commemorate an individual's life and soothe social disputes. And it appears that feasts would have played a significant role in that.
The discovery of cattle and other animals at "Hilazon Tachtit testifies to symbolic and ritual continuity with the succeeding Neolithic cultures," the researchers write. "This continuity in tradition emphasizes the importance of local contributions to the agricultural transition."
Leore Grosman of the Institute of Archaeology at Hebrew University in Jerusalem also contributed to this research. A grant from the National Science Foundation's Behavioral and Cognitive Sciences division supported it.
Sources and contacts:
Bobbie Mixon, NSF
Program Contacts
John E. Yellen, NSF (
rincipal Investigators
Natalie Munro, University of Connecticut (860) 486-0090
National Science Foundation news release
Proceedings of the National Academy of Sciences
http://www.pnas.org/
on August 30, 2010