Researchers have developed low-cost lasers for detecting hidden explosives that could lead to improved airport and roadside security.

The physicists from the University of St Andrews have made a laser that can trace tell-tale vapours emitted from explosives such as TNT. Once developed, the scientists say their device will work like ‘an artificial nose for a robot dog’, sniffing out vapours at extremely low concentrations.

The technology could not only improve airport security, but help detect landmines and roadside bombs which emit dilute hidden clouds of vapour into the air.


A plastic laser made at the University of St Andrews 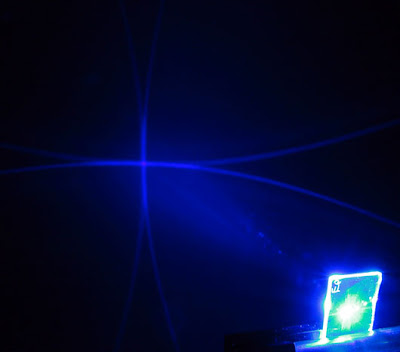 Photo: G. Tsiminis
The research, published this week, was carried out by Ying Yang, Graham Turnbull and Ifor Samuel. Using a thin film of polyfluorene - a special kind of light-emitting plastic - they have created a laser that reacts with vapours from explosives such as TNT. The laser light dims within seconds when the plastic comes into contact with even the tiniest emission of vapour.

The laser sensor can be reset by a blast of nitrogen gas.

Dr Turnbull explained, "Floating above a landmine in Iraq or Afghanistan, there's a very weak, dilute cloud of vapours of explosive molecules that the bomb is made from.

“We have shown that our lasers can rapidly sense these TNT-like molecules, frequently used in explosives, at extremely low concentrations.”

The team say the laser could be built into a remotely-controlled robotic device that could be despatched into a mine field, looking for vapour clouds.

Dr Turnbull continued, "On a dusty road in Afghanistan there are relatively few things that might affect the laser output and it certainly could have potential in that area. Essentially it's making an artificial nose for a robot sniffer dog".

One advantage over existing methods is that the new technology is relatively low-cost since the plastic, polyfluorene, is widely used in plastic electronics.

The research is published by the journal Advanced Functional Materials.