A $3 million Ohio Third Frontier award to the University of Dayton Research Institute will fund the scale-up and production of a "game-changing" new nanomaterial that will allow composites to multitask - a wind turbine tower that can de-ice its own blades in winter or store energy to release on a calm day, powering a grid even when its blades are not moving; or a military vehicle whose armor can serve as a battery, powering some of the vehicle's electrical components.

Nicknamed "fuzzy fiber" by its inventor at the University of Dayton Research Institute, Nano Adaptive Hybrid Fabric (NAHF-XTM) is the first tailored nanomaterial capable of being produced in sizes and quantities large enough to make them affordable and viable for large-scale commercial use. When incorporated into resins, fuzzy fibers enable composites to be tailored for electrical and thermal conductivity, chemical and biological sensing, energy storage and conversion, thermal management and other properties.

"This is going to disrupt the way we think about materials," said NAHF-XTM inventor Khalid Lafdi, group leader for carbon materials at the Research Institute. "From now on, instead of thinking 'mono,' we will think 'multi' - multiscale, multifunctional, multitasking."

Aside from serving simply as structural material, composites made with fuzzy fiber can work as batteries, sensors, heaters, supercapacitors, structural health monitors and other systems whose operations are normally performed by additional components, Lafdi added.

"By manufacturing structural material that can serve multiple functions, fewer parts are needed for any given application, which means reduced cost, lighter weight and greater efficiency," Lafdi said.

Lafdi called the material "game-changing" because of its ability to be produced in continuous sheets to desired sizes like other fabrics.

"Everybody is growing carbon nanotubes on substrates," Lafdi said. "We're the only people who are producing them on a large-scale and continuous process, and not just in batches. This means we can produce the material at a low cost, and it also means we can produce pieces big enough to cover an aircraft."

Lafdi and his team have been producing 500 feet of 12-inch-wide fabric per day at a pilot plant in the Research Institute's Shroyer Park Center.

The University of Dayton Research Institute and Ohio collaborators Goodrich, Owens Corning and Renegade Materials will match the Third Frontier award, announced May 26 in Columbus, to fund the creation and equipment of a full-scale production facility for the hybrid fabric. The new facility, to be located within Dayton's Aerospace Hub, will be equipped to produce 60-inch-wide fabric. Goodrich expects to apply the technology in the marketplace first for commercial aerospace applications.

The NAHF-XTM technology was pioneered and perfected over seven years with funding from the Air Force, Army, aerospace industry and Third Frontier, said Brian Rice, University of Dayton Research Institute division head for multi-scale composites and polymers. After successfully controlling growth of carbon nanotubes on individual carbon fibers, researchers accomplished the same on a type of carbon-fiber yarn and eventually on engineered textiles. The breakthrough was in overcoming issues of uniformity and precisely controlling growth of the nanotubes, Rice said.

"Various industries have been replacing metals with composites in structures and components because of their lighter weight and durability. But in doing so, electrical and thermal conductivity inherent to metals is lost. By growing nanotubes on carbon fibers used in composites in a very specific manner, those properties are built back in and the composites also can be tailored for specialized mechanical properties." 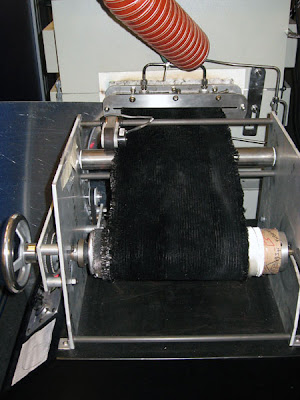 Rice said the hybrid fabric production facility will serve as a cornerstone for Ohio's Aerospace Hub in Dayton by helping to attract and connect new and existing businesses related to aerospace, sensing technologies and advanced materials. One targeted application will be unmanned aerial vehicles weighing less than 150 pounds. "We'd like to begin making 'smart' structural materials for UAVs that also serve as the plane's communication, power and sensor systems. Not having to add a battery or external sensors means less weight on the plane."

The program is expected to create 70 high-tech jobs in Ohio during its first three years and 165 jobs in the second five years.
on June 30, 2010