The Minister of Science and Technology of India, Mr. Prithviraj Chavan, announced the decision of India to join the Thirty Meter Telescope Project (TMT) as an Observer. TMT is the next-generation astronomical observatory that is scheduled to begin scientific operations in 2018 on Mauna Kea, Hawaii.
Observer status is the first step in becoming a full partner in TMT and participating in the engineering development and scientific use of what will be the world's most advanced and capable astronomical observatory.
This is an artist rendering of dome and Thirty Meter Telescope. 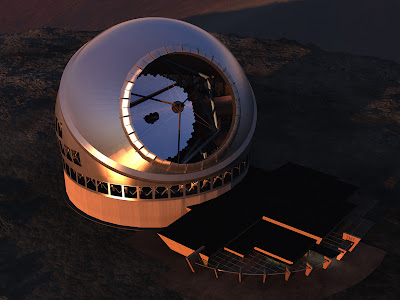 "India is well recognized and respected as one of the top-ranking countries in the field of basic research," said Henry Yang, chairman of the TMT board and Chancellor of the University of California, Santa Barbara. "As part of TMT, India will be an integral part of the next generation of astronomical research. We welcome their collaboration on this exciting project."
"The government and people of India recognize the importance of embarking on world-class, international science collaborations," said Thirumalachari Ramasami, Secretary of the Department of Science and Technology, during a ceremony in Washington. "We believe the Thirty Meter Telescope will enable us to continue and expand our role as an international leader in technology development and fundamental research."
"The TMT and its partners are extremely pleased that India has selected TMT as their next-generation astronomical research project," said Edward Stone vice chair of the TMT board and Caltech's Morrisroe Professor of Physics. "As an Observer, we can now begin exploring the specific areas where India can contribute to the project and look forward to their becoming a full partner with a formal agreement and commitment for funding."
"We look forward to working with India on the international Thirty Meter Telescope Project," said Professor Ray Carlberg, the Canadian Large Optical Telescope project director and a TMT board member. "By broadening the TMT partnership, we bring greater expertise and the potential for additional government endorsement to the table, which will certainly benefit the entire project."
The TMT project plans to begin work on-site late next year and achieve first light in 2018, at which time it will be the first of the next generation of ground-based optical observatories. This revolutionary telescope will integrate the latest innovations in precision control, segmented mirror design, and adaptive optics to correct for the blurring effect of Earth's atmosphere.
Building on the success of the twin Keck telescopes, the core technology of TMT will be a 30-meter segmented primary mirror. This will give TMT nine times the collecting area of today's largest optical telescopes and three times sharper images.
The TMT has begun full-scale polishing of the 1.4-meter mirror blanks that will make up the primary mirror. TMT also has developed many of the essential prototype components for the telescope, including key adaptive optics technologies and the support and control elements for the 492 mirror segments.
The TMT project has completed its $77 million design development phase with primary financial support of $50 million from the Gordon and Betty Moore Foundation and $22 million from Canada. The project has now entered the early construction phase thanks to an additional $200 million pledge from the Gordon and Betty Moore Foundation. Caltech and the University of California have agreed to raise matching funds of $50 million to bring the construction total to $300 million, and the Canadian partners propose to supply the enclosure, the telescope structure, and the first light adaptive optics.
The TMT project is an international partnership among the California Institute of Technology, the University of California, and the Association of Canadian Universities for Research in Astronomy. The National Astronomical Observatory of Japan (NAOJ) joined TMT as a Collaborating Institution in 2008. The National Astronomical Observatories of the Chinese Academy of Sciences joined TMT as an Observer in 2009.
Artist renderings of the Thirty Meter Telescope 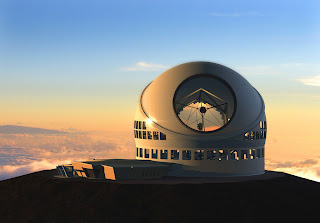