Texas scientists have developed a power source that taps the human heart as a source of energy to power a medical device.  The power source energy is derived from changes in shape responsive to autonomic movements of the human body. More particularly, it is a self-contained power source configured to the implanted in a living organism, such as within a human's heart, such that movement of the heart acting on the power source will cause generation of electrical power.
University of Texas System (Austin, TX) scientists have developed piezoelectric implant suitable for implantation inside a human body that includes a power consuming means responsive to a physiological requirement of the human body, a power source and a power storage device according to U.S. Patent Application 20100160994.
The power source comprises a sheathed piezoelectric assembly that is configured to generate an electrical current when flexed by the tissue of the body and communicate the generated current to the power storage device, which is electrically coupled to the power source and to the power consuming means, say inventors Marc D. Feldman, Shaochen Chen, Li-Hsin Han, Carlos A. Aguilar, Arturo A. Ayon, C. Mauli Agrawal, David M. Johnson, Devang N. Patel, Steven R. Bailey, Brian A. Korgel and Doh C. Lee
FIG. 1 is a partial perspective view of one embodiment of an exemplary power source of the present invention mounted therein a portion of an AICD lead. 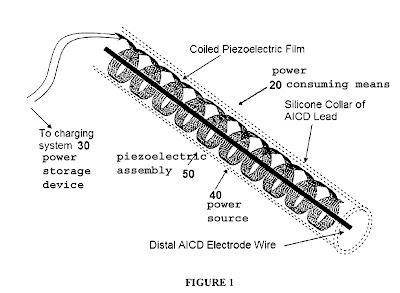 FIG. 2 is a partial cutaway view of a power source  embedded therein the heart of a subject, showing the power source spaced from the proximal and distal coil electrodes of the pacing lead. 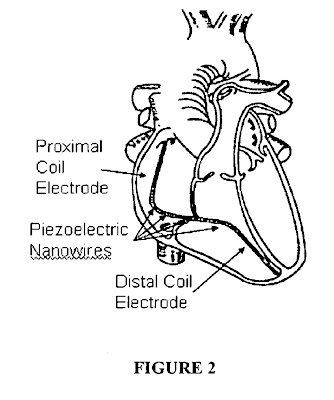 n implant configured for implantation inside a human body, includes: a power consuming means for responding to a physiological requirement of the body; and a power source comprising a sheathed flexible piezoelectric assembly configured to generate an electrical current when flexed by a tissue in the human body, wherein the piezoelectric assembly comprises a plurality of oriented nanowires arranged in an array and forming a nanowire layer, and wherein the plurality of oriented nanowires is encapsulated in a polymeric matrix.
Generally, patients with reduced systolic function (LVEF<30%) are now recommended to receive an Automatic Implantable Cardiac Defibrillator (AICD). An AICD is a device that is implanted in the chest to constantly monitor and, if necessary, correct episodes of an abnormal heart rhythm. The primary corrective functions of an AICD are to control tachycardia through cardioversion (low-energy shocks to convert the heart rhythm to a more normal rate) and manage fibrillation through defibrillation. Most AICDs are combined with a Bi-Ventricular Pacemaker (BVP), a type of implantable pacemaker designed to simultaneously treat both ventricles when they do not pump in unison.
Conventional pacemakers regulate the right atrium and right ventricle (AV synchrony), while BVPs add a third lead to help the left ventricle contract at the same time. Patients with a widened QRS and Stage 3 or 4 congestive heart failure have improved outcome when receiving BVPs. Conventionally, QRS duration is the measured duration of electrical activation of the heart's two main pumping chambers. Recent studies have made it clear that the majority of patients with cardiomyopathy of any cause will benefit from placement of AICD and BVP to both reduce hospital admissions and prolong life.

In 2004, AICDs were implanted in over 100,000 individuals. The rate of replacement of pacemakers and AICDs is dependant on the battery capacity and the degree of pacing and/or occurrence of defibrillation. In medical devices that are implanted, for example, the battery that powers the device such as the AICD must be implanted along with the AICD or be connected to it by leads that pass through the body. The latter option allows the battery to be readily recharged or replaced. However, this option also increases the risk of infection and other complications.
FIG. 8 is a SEM image of exemplary ZnO nanowires extending from an Ag layer that covers the exterior AICD lead wall 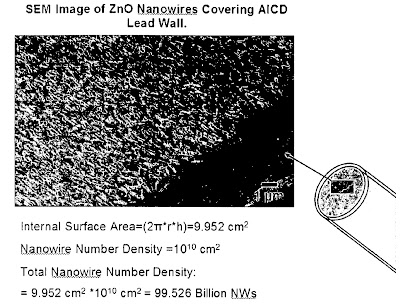 FIG. 9 is a SEM image showing a perspective view of a distal end of a ZnO nanowire, showing its generally hexagonal shape. 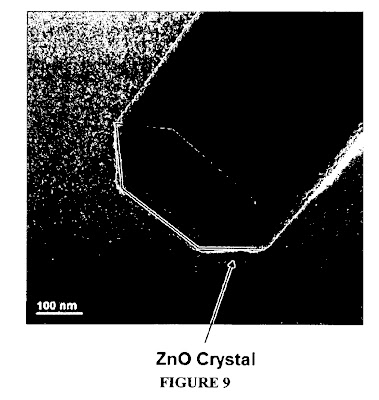 It is estimated that the average life of an internally implanted battery powered AICD is less than half of the normal life span of a patient after having an AICD implanted. Approximately 70% of AICDs and BVPs implanted in 2004 will require replacement because of battery depletion over the next five years. While the longevity of the average AICD patient has increased to 10 years after implantation, only 5% of implants functioned for seven years, and this mismatch poses a significant and ever growing clinical and economic burden.

Approximately 90% of AICD failures were caused by normal battery depletion and the shift to dual-chamber models has significantly shortened battery life even further. Moreover, there are now efforts to "piggyback" devices on AICDs and BVPs for additional functionality such as pressure and volume sensors to warn of impending congestive heart failure (CHF), lung impedance sensors to warn of CHF and chemical sensors to provide telemetric measures of glucose, potassium, bun and creatinine, all of which would require additional power.

Therefore, if the battery is implanted, it must someday be replaced and the battery's limited life is a primary failure mechanism in conventional pacemaker and AICD designs. Every time a surgery is performed there is an inherent risk and discomfort to the patient. This, in combination with complications due to bleeding and infection and potential damage to the leads (requiring the leads to also be replaced) during the removal and implantation of a new pacemaker and AICD, make it beneficial for a pacemaker and defibrillator to be implanted that has a life expectancy equivalent to or that exceeds that of the patient. Even the replacement of the battery is a surgical procedure with inherent risks of its own
on June 28, 2010