Microphotograph of a Gram stain of the bacterium Bacillus anthracis, the cause of the anthrax disease 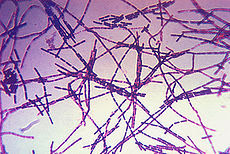 
Nanowires and nanotubes provide a critical enabling technology for chem/bio sensing. Their surface-to-volume ratio is phenomenally high; therefore, surface events such as binding of a protein or an ion can trigger a significant change in bulk electronic properties and enable electrical detection of binding events, according to inventors Aleksandr Noy,  Olgica Bakajin, Sonia Letant, Michael Stadermann,  and Alexander B. Artyukhin
Microfluidics is a multidisciplinary field comprising physics, chemistry, engineering, and biotechnology that studies the behavior of fluids at the microscale and mesoscale, that is, fluids at volumes thousands of times smaller than a common droplet. It is a new science, having emerged only in the 1990s, so the number of applications for this technology is currently small. However, it is potentially significant in a wide range of technologies. Microfluidics is used in the development of DNA microarray technology, micro-thermal and micro-propulsion technologies, and lab-on-a-chip technology.
Microfluidics also concerns the design of systems in which such small volumes of fluids will be used. The behavior of fluids at the microscale can differ from `macrofluidic` behavior in that factors such as surface tension, energy dissipation, and electrokinetics start to dominate the system. Microfluidics studies how these behaviors change, and how they can be worked around, or exploited for new uses. A microfluidic device can be identified by the fact that it has one or more channels with at least one dimension less than 1 mm.