UCLA evolutionary biologists have looked back 35 million years to provide the first test of why whales show such rich diversity. Species diversification and body size of whales were established early in their evolution.
Whales are remarkably diverse, with 84 living species of dramatically different sizes and more than 400 other species that have gone extinct, including some that lived partly on land. Why are there so many whale species, with so much diversity in body size?
Sperm Whale 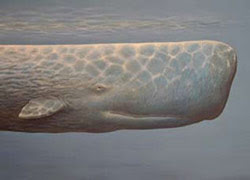 Image credit: Wikipedia
To answer that, UCLA evolutionary biologists and a colleague used molecular and computational techniques to look back 35 million years, when the ancestor of all living whales appeared, to analyze the evolutionary tempo of modern whale species and probe how fast whales changed their shape and body size. They have provided the first test of an old idea about why whales show such rich diversity.
"Whales represent the most spectacularly successful invasion of oceans by a mammalian lineage," said Michael Alfaro, UCLA assistant professor of ecology and evolutionary biology, and senior author of the new study, which was published this month in the early online edition of Proceedings of the Royal Society B and will appear at a later date in the journal's print edition. "They are often at the top of the food chain and are major players in whatever ecosystem they are in. They are the biggest animals that have ever lived. Cetaceans (which include whales, as well as dolphins and porpoises) are the mammals that can go to the deepest depths in the oceans.
"Biologists have debated whether some key evolutionary feature early in their history allowed whales to rapidly expand in number and form," Alfaro said. "Sonar, large brains, baleen (a structure found in the largest species for filtering small animals from sea water) and complex sociality have all been suggested as triggers for a diversification, or radiation, of this group that has been assumed to be rapid. However, the tempo — the actual rate of the unfolding of the cetacean radiation — has never been critically examined before. Our study is the first to test the idea that evolution in early whales was explosively fast."
One explanation for whale diversity is simply that they have been accumulating species and evolving differences in shape as a function of time. The more time that goes by, the more cetacean species one would expect, and the more variation in body size one would expect to see in them.
Humpback Whale

Image credit: Wikipedia
"Instead, what we found is that very early in their history, whales went their separate ways from the standpoint of size, and probably ecology," Alfaro said. "This pattern provides some support for the explosive radiation hypothesis. It is consistent with the idea that some key traits opened up new ways of being 'whale-like' to the earliest ancestors of modern cetaceans, and that these ancestors evolved to fill them. Once these forms became established, they remained."
Species diversification and variations in body size were established early in the evolution of whales, Alfaro and his colleagues report.
Large whales, small whales and medium-sized whales all appeared early in the history of whales, with the large whales eating mostly plankton, small whales eating fish and medium-sized whales eating squid.
"Those differences were probably in place by 25 million years ago at the latest, and for many millions of years, they have not changed very much," said the study's lead author, Graham Slater, a National Science Foundation–funded UCLA postdoctoral scholar in Alfaro's laboratory. "It's as if whales split things up at the beginning and went their separate ways. The distribution of whale body size and diet still corresponds to these early splits."
"The shape of variation that we see in modern whales today is the result of partitioning of body sizes early on in their history," Alfaro said. "Whatever conditions allowed modern whales to persist allowed them to evolve into unique, disparate modes of life, and those niches largely have been maintained throughout most of their history.
Artist's conception of male Maiacetus inuus with transparent overlay of skeleton, an early whale that gave birth on land. The 47.5 million-year-old fossils, discovered in Pakistan in 2000 and 2004, are described in a paper published Feb. 4, 2009, in the online journal PLoS and show how early whales made the transition from land to sea. 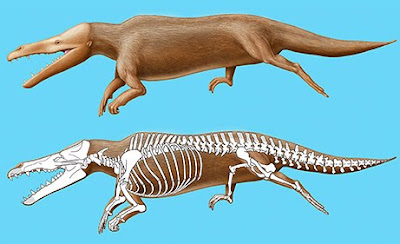 Image credit: National Science Foundation/ H. Richard Lane, program director in the National Science Foundation (NSF)'s Division of Earth Sciences
"We could have found that the main whale lineages over time each experimented with being large, small and medium-sized and that all the dietary forms appeared throughout their evolution, or that whales started out medium-sized and the largest and smallest ones appeared more recently — but the data show none of that. Instead, we find that the differences today were apparent very early on."
Killer whales are an exception, having become larger over the last 10 million years, Alfaro and Slater said. Killer whales are unusual in that they eat mammals, including other whales.
"If we look at rates of body-size evolution throughout the whale family tree, the rate of body-size evolution in the killer whale is the fastest," Slater said. "It came from the size of a dolphin you would see at SeaWorld about 10 million years ago and grew substantially."
Whales range in size from the largest animal known to have ever existed, the blue whale, which is more than 100 feet long, to small species that are about the size of a dog and can get caught in fishermen's nets, Slater said.
Alfaro and Slater do not find evidence for rapid whale diversification, but extinctions may have made it difficult to detect early rapid diversification.
Whales are about 55 million years old, but the first group of whales to take to water is extinct, Alfaro said. Different hypotheses have been proposed to explain the rapid appearance and diversification of modern whales, which coincided with the extinction of the primitive whales.
Before the extinction of the dinosaurs 65 million years ago, there were large marine reptiles in the oceans that went extinct. When the earliest whales first went into the oceans some 55 million years ago, they had essentially no competitors, Alfaro and Slater noted. These primitive whales ranged in size from several feet to 65 feet long and looked similar to land animals, Slater said. They all fed on fish; the earliest whales did not dive deep down to catch squid.
Alfaro's laboratory uses many techniques, including the analysis of DNA sequences, computational techniques and the fossil record to analytically test ideas about when major groups appear and when they become dominant. He and his research team integrate information from the fossil record with novel computational methods of analysis.
"We are interested in understanding the causes of biodiversity," Alfaro said.
"If we really want to understand species diversity, the number of species in any given group and how the variation in body size came to be, this paper points out that we will need to rely on more of a collaboration between paleontologists and molecular biologists to detect possible changes in the rate at which new species came into existence," Slater said.
The analytical tools for integrating the fossil data with the molecular data are just being developed, said Alfaro, whose research is bridging the divide.
The research is federally funded by the National Science Foundation (NSF) and by the NSF-funded National Evolutionary Synthesis Center.
UCLA is California's largest university, with an enrollment of nearly 38,000 undergraduate and graduate students. The UCLA College of Letters and Science and the university's 11 professional schools feature renowned faculty and offer more than 323 degree programs and majors. UCLA is a national and international leader in the breadth and quality of its academic, research, health care, cultural, continuing education and athletic programs. Five alumni and five faculty have been awarded the Nobel Prize.
Contacts and sources:
Stuart Wolpert
University of California - Los Angeles
National Science Foundation
Related WebsitesUniversity of Michigan video of Pakistani whales: http://www.ns.umich.edu/podcast/video.php?id=718
on May 28, 2010