Scientists from four U.S. universities have created a way to use Rice University's light-activated nanoshells as building blocks for 2-D and 3-D structures that could find use in chemical sensors, nanolasers and bizarre light-absorbing metamaterials. Much as a child might use Lego blocks to build 3-D models of complex buildings or vehicles, the scientists are using the new chemical self-assembly method to build complex structures that can trap, store and bend light.

The research appears in this week's issue of the journal Science.

"We used the method to make a seven-nanoshell structure that creates a particular type of interference pattern called a Fano resonance," said study co-author Peter Nordlander, professor of physics and astronomy at Rice. "These resonances arise from peculiar light wave interference effects, and they occur only in man-made materials. Because these heptamers are self-assembled, they are relatively easy to make, so this could have significant commercial implications."

Because of the unique nature of Fano resonances, the new materials can trap light, store energy and bend light in bizarre ways that no natural material can. Nordlander said the new materials are ideally suited for making ultrasensitive biological and chemical sensors. He said they may also be useful in nanolasers and potentially in integrated photonic circuits that run off of light rather than electricity.

Nordlander, the world's leading theorist on nanoparticle plasmonics, had predicted in 2008 that a heptamer of nanoshells would produce Fano resonances. That paper spurred Capasso's efforts to fabricate the structure, Nordlander said.

The new self-assembly method developed by Capasso's team was also used to make magnetic three-nanoshell "trimers." The optical properties of these are described in the Science paper, which also discusses how the self-assembly method could be used to build even more complex 3-D structures.

Nanoshells, the building blocks that were used in the new study, are about 20 times smaller than red blood cells. In form, they resemble malted milk balls, but they are coated with gold instead of chocolate, and their center is a sphere of glass. By varying the size of the glass center and the thickness of the gold shell, Halas can create nanoshells that interact with specific wavelengths of light.

"Nanoshells were already among the most versatile of all plasmonic nanoparticles, and this new self-assembly method for complex 2-D and 3-D structures simply adds to that," said Halas, who has helped develop a number of biological applications for nanoshells, including diagnostic applications and a minimally invasive procedure for treating cancer. 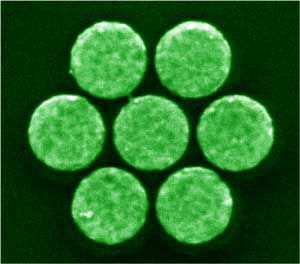 Additional co-authors of the new study include Rice graduate students Kui Bao and Rizia Bardhan; Jonathan Fan and Vinothan Manoharan, both of Harvard; Chihhui Wu and Gennady Shvets, both of the University of Texas at Austin; and Jiming Bao of the University of Houston. The research was supported by the National Science Foundation, the Air Force Office of Scientific Research, the Department of Defense, the Robert A. Welch Foundation, the Department of Energy and Harvard University.
on May 30, 2010