The National Oceanic and Atmospheric Administration has developed the following answers regarding the potential impact of a hurricane on the British Petroleum Oil Spill Disaster.
What will happen to a hurricane that runs through this oil slick?
• Most hurricanes span an enormous area of the ocean (200-300 miles) — far wider than the current size of the spill.
• If the slick remains small in comparison to a typical hurricane’s general environment and size, the anticipated impact on the hurricane would be minimal.
• The oil is not expected to appreciably affect either the intensity or the track of a fully developed tropical storm or hurricane.
• The oil slick would have little effect on the storm surge or near-shore wave heights.
This image from NASA's Airborne Visible/Infrared Imaging Spectrometer instrument (AVIRIS) was collected on May 17, 2010, over the site of the Deepwater Horizon BP oil spill disaster. In the image, crude oil on the surface appears orange to brown. The measurements made by AVIRIS for each point in this image allow scientists to detail the characteristics of the oil on the surface using spectroscopic methods. AVIRIS has measured more than 100,000 square kilometers (38,610 square miles) of data in support of the national oil spill response. 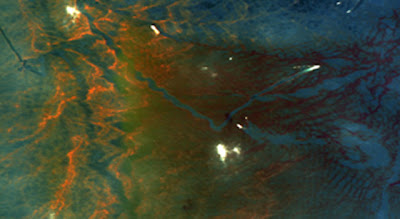 What will the hurricane do to the oil slick in the Gulf?
•  The high winds and seas will mix and “weather” the oil which can help accelerate the biodegradation process.
• The high winds may distribute oil over a wider area, but it is difficult to model exactly where the oil may be transported.
•  Movement of oil would depend greatly on the track of the hurricane.
• Storms’ surges may carry oil into the coastline and inland as far as the surge reaches. Debris resulting from the hurricane may be contaminated by oil from the Deepwater Horizon incident, but also from other oil releases that may occur during the storm.
A hurricane’s winds rotate counter-clockwise. Thus, in very general terms:
• A hurricane passing to the west of the oil slick could drive oil to the coast.
• A hurricane passing to the east of the slick could drive the oil away from the coast.
• However, the details of the evolution of the storm, the track, the wind speed, the size, the forward motion and the intensity are all unknowns at this point and may alter this general statement.
Will the oil slick help or hurt a storm from developing in the Gulf?
• Evaporation from the sea surface fuels tropical storms and hurricanes. Over relatively calm water (such as for a developing tropical depression or disturbance), in theory, an oil slick could suppress evaporation if the layer is thick enough, by not allowing contact of the water to the air.
• With less evaporation one might assume there would be less moisture available to fuel the hurricane and thus reduce its strength.
• However, except for immediately near the source, the slick is very patchy. At moderate wind speeds, such as those found in approaching tropical storms and hurricanes, a thin layer of oil such as is the case with the current slick (except in very limited areas near the well) would likely break into pools on the surface or mix as drops in the upper layers of the ocean. (The heaviest surface slicks, however, could re-coalesce at the surface after the storm passes.)
• This would allow much of the water to remain in touch with the overlying air and greatly reduce any effect the oil may have on evaporation.
• Therefore, the oil slick is not likely to have a significant impact on the hurricane.
Will the hurricane pull up the oil that is below the surface of the Gulf?
• All of the sampling to date shows that except near the leaking well, the subsurface dispersed oil is in parts per million levels or less. The hurricane will mix the waters of the Gulf and disperse the oil even further.
Have we had experience in the past with hurricanes and oil spills?
• Yes, but our experience has been primarily with oil spills that occurred because of the storm, not from an existing oil slick and an ongoing release of oil from the seafloor.
• The experience from hurricanes Katrina and Rita (2005) was that oil released during the storms
became very widely dispersed.
• Dozens of significant spills and hundreds of smaller spills occurred from offshore facilities, shoreside facilities, vessel sinkings, etc.
Will there be oil in the rain related to a hurricane?
• No. Hurricanes draw water vapor from a large area, much larger than the area covered by oil, and rain is produced in clouds circulating the hurricane.
Learn more about NOAA’s response to the BP oil spill at
http://response.restoration.noaa.gov/deepwaterhorizon
To learn more about NOAA, visit http://www.noaa.gov
on May 31, 2010