A University of Central Florida chemist has devised an apparatus to produce hydrogen from hydrocarbons for fuel cells that also produces a filamentous carbon called a carbon octopus that can be used to cleanup oil spills.
University of Central Florida Research Foundation, Inc. (Orlando, FL) received U.S. Patent 7,691,271 for carbon filaments for applications in many traditional areas, e.g. as catalysts and catalyst supports, selective adsorbents, composite materials, reinforcement agents, in energy and hydrogen storage, and oil spill cleanup.  The patent was granted on April 6, 2010.
A novel application for carbon materials produced during operation of the apparatus was discovered by inventor Dr. Nazim Muradov. It was found that carbon products produced by hydrocarbon decomposition over catalytic materials (e.g. AC, CB, Fe-alumina) can be used for the clean-up of oil spills on the surface of water. The invention takes advantage of the combination of two features characteristic of the carbon-product: distinct hydrophobic nature of the carbon surface, and the presence of carbon fibers which act as a hydrophobic "sponge" and readily adsorb the oil.
Scattering of carbon-product particles over the surface of oil spill results in breaking of the oil pellicle and formation of a plurality of oil/carbon isles separated from each other. These isles can be conveniently removed from water surface by "brushing" with net. The captured oil can be easily retrieved from the oil/carbon slurry using conventional techniques (e.g. press separator). Alternatively, if heavy carbon/support particles (e.g. carbon deposited on Fe-based catalyst) are used for oil spill clean-up, the isles will slowly sink and remain under the water until oil is microbiologically consumed.
Muradov’s discovery is distinguished from the prior art in both physical properties and method of production. In the first aspect, carbon filaments produced by the invention are approximately 1 micron in mean diameter, "octopus"-like structure shown in FIG. 4. The "octopus"-like structure consists of a loose, curved, elongated worm shaped, filament or yarn shaped, graphitic structure wherein a portion is hollow, tubular and longitudinally uniform (thus, they are one to two orders of magnitude thicker than conventionally produced carbon nanofibers). In the second aspect: they are produced in the presence of carbon-based materials (e.g., carbon black (CB) or activated charcoal (AC)), (in contrast to transition metal catalysts used in the prior art; carbon filaments are preferably produced by decomposition of hydrocarbons (e.g., methane, propane, gasoline) over carbon-based carbonaceous material (CM) by heating it to 850-1200.degree. C., preferably, by passing electric current through it.
FIG. 4 is a scanning electron micrographic photo of a sample of filamentous carbon produced by decomposition of propane over chopped carbon fibers. 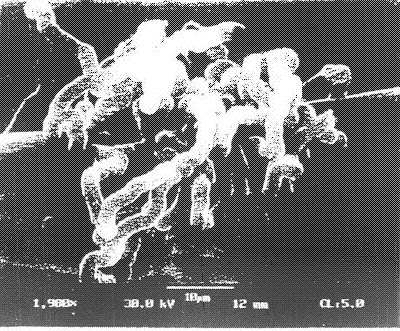 Dr. Nazim Z. Muradov is the principal research scientist at the Florida Solar Energy Center, University of Central Florida.  He holds a Doctor of Science degree in Physical Chemistry (1990) and Ph.D. in Kinetics & Catalysis (1975) both from the Institute of Chemical Physics (Moscow, Russia), and he graduated from the Institute of Oil and Chemistry with B.S./M.S. in Petroleum/Chemical Engineering (Baku, Azerbaijan, 1970). Dr. Muradov has been involved in hydrogen energy research since 1979. His main areas of research include thermocatalytic and photocatalytic hydrogen production systems, hydrocarbon reformers for fuel cell applications, solar hybrid water-splitting cycles, catalytic conversion of solar energy, hydrogen sensors, fossil fuel decarbonization, radiant detoxification of hazardous wastes, nanostructured carbon materials and catalytic processing of hydrocarbons.
on May 02, 2010