Researchers at Oregon State University have made an important fundamental advance in robotics, in work that should lead toward robots that not only can walk and run effectively, but use little energy in the process. By achieving an optimal approach with robotic mechanisms, studies are moving closer to robots that could take on dangerous missions in the military, create prosthetic limbs for humans that work much better, or even help some people who use wheelchairs to gain "walking" abilities.
A biped robot design being built by researchers at Oregon State University holds the potential to reduce energy use while improving robotic locomotion. This work reflects some important fundamental advances in the understanding of robotic motion. 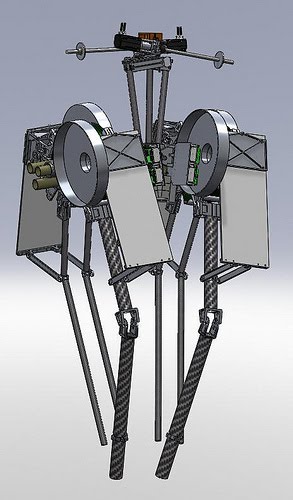 Researchers at Oregon State University have made an important fundamental advance in robotics, in work that should lead toward robots that not only can walk and run effectively, but use little energy in the process.
By achieving an optimal approach with robotic mechanisms, studies are moving closer to robots that could take on dangerous missions in the military, create prosthetic limbs for humans that work much better, or even help some people who use wheelchairs to gain "walking" abilities.
The newest findings from the Dynamic Robotics Laboratory at OSU are being presented at two conferences, including the IEEE Conference on Robotics and Automation.
The OSU research program has received a new $750,000 grant for its work from the Human Frontiers Science Program, administered through the National Science Foundation. Work to actually build a robot with some of the newest features should be completed by this summer.
"Researchers have been working toward robot locomotion for a long time based mostly on experience and intuition," said Jonathan Hurst, an assistant professor of robotics and mechanical design at OSU. "What we've done is taken a step back to analyze the fundamental dynamics of the mechanical system, what behavior is really possible for a given robotic system. A rock can't fly, no matter what software you write for it.
"This is an important advance and gives us a new foundation to tell what actually will and won't work before we even try to build it," he said.
Right now, most applications of robotics are done with machines working in a precise or controlled situation – picking something up off an assembly line, spot welding an automobile in an exact way thousands of times a day.
But in terms of locomotion, Hurst said, humans and other animals are a tough act to follow. Using limited energy, they can move easily over uneven terrain, and respond with a fascinating balance of muscles and tendons. They have different ways to deal with forces, such as holding something in place rigidly, or also responding to outside influences – like the delicate act of holding a cup of coffee level during a bumpy car ride.
In their recent studies, the OSU researchers essentially proved that these two abilities are mutually exclusive. Humans deal with this problem by flexing opposing pairs of muscles, to change the dynamic properties of their arm. For a robot, the more it is able to do one of these tasks, the less able it is to do the other.
Existing robots that can walk and run, Hurst said, tend to be as rigid as possible while still achieving a basic gait. But this approach uses a huge amount of energy, significantly reducing their value and possible applications in the real world. The OSU researchers are working toward something that has similar or better performance, but uses far less energy – the best of both worlds, and closer to the abilities of animals.
"If robotic locomotion is ever to achieve some of what we want, it will have to use less energy," Hurst said. "There are machines that can walk with no active controls at all, using barely any energy, but they fall if they run into the smallest bump. We need to use as much of that passive ability as possible and only use motors or active controls if it's really necessary, so we can save energy in the process."
In part because it's consistent with these goals, the OSU researchers also hope to win what's called the "W" Prize, a $200,000 award that's been promised for the first robot that can move 10 kilometers within 10,000 seconds, through and over obstacles, using less energy than it would take a human to do the same task.
Part of the OSU research are studies under way with colleagues in England to examine ostriches, and make direct comparisons to the robot behavior. Animals, including ostriches, have a great ability to respond to unexpected disturbances while running, and can provide insights into the needed robotic equivalent – combining spring-mass models with "force control actuators."
"Long term, there's no reason we shouldn't be able to build robots or robotic devices with excellent locomotion ability," Hurst said. "Clearly this might be useful for some military or police applications in highly dangerous situations. But I could also see great improvements possible with prosthetic limbs that work much better than existing technology, or even the creation of exoskeletons that might allow someone with limited motor ability to walk effectively."
Contacts and sources:
Jonathan Hurst
541-737-7010
Oregon State University
Human Frontiers Science Program
on May 27, 2010