In the first peer-reviewed scientific paper to be published about the Icelandic volcano since its eruption in April 2010, UK researchers write that the ash plume which hovered over Scotland carried a significant and self-renewing electric charge.
The volcano-chasing researchers argue this adds a further dimension to understanding the detailed nature of volcanic plumes and their effects on air travel.
Ash plume from Eyjafjallajokull Volcano, Iceland 13 :20 UTC 4/17 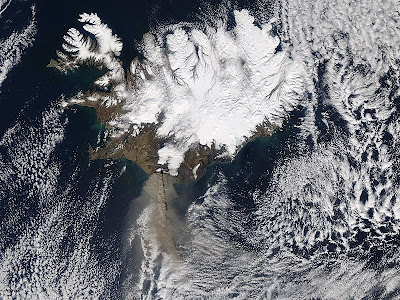 Image credit: NASA Satellite Aqua
The paper, to be published today, Thursday 27 May, in IOP Publishing's Environmental Research Letters, is published as the UK continues to face the possibility of further flight disruption from future volcanic activity.
Shortly after the volcano's active eruption phase began in mid-April, the Met Office contacted Joseph Ulanowski from the Science and Technology Research Institute at the University of Hertfordshire, who last year, together with Giles Harrison from the Department of Meteorology at the University of Reading, had developed a specialist weather balloon which could assess the location and composition of the volcanic ash clouds.
Their balloons, originally designed and used to study the properties of desert dust clouds, are able to assess not only the size of atmospheric particles but also the electric charge present.
Measurements made last year with the balloons in Kuwait and off the west coast of Africa showed clearly that desert dust could become strongly electrified aloft. Charging modifies particle behaviour, such as how effectively particles grow and are removed by rain.
A hastily scrambled team travelled to a site near Stranraer in Scotland where a balloon was launched, detecting a layer of volcanic ash 4km aloft, about 600m thick, with very abrupt upper and lower edges.
From their measurements, the researchers conclude that neither energy from the volcanic source - more than 1200 kilometres away - nor weather conditions could have been responsible for the position of the charge found by the balloon.
The presence of charge deep inside the plume, rather than on its upper and lower edges, contradicts expectations from models assuming solely weather-induced charging of layer clouds.
Giles Harrison said, "Detailed volcanic plume properties, such as the particle size, concentration and charge found by our weather balloon are important in predicting the impact on aircraft."
Contact: Joe Winters
44-207-470-4815
Institute of Physics
The paper can be found in IOP Publishing's open-access journal Environmental Research Letters at http://iopscience.iop.org/1748-9326/5/2/024004/fulltext  from Thursday 27 May.
on May 27, 2010