The researchers figured out Northwest Africa's climate history by using the information recorded in tree rings. The oldest trees sampled contain climate data from the medieval period.
Droughts in the late 20th century rival some of North Africa's major droughts of centuries past, reveals new research that peers back in time to the year 1179.
The first multi-century drought reconstruction that includes Morocco, Algeria and Tunisia shows frequent and severe droughts during the 13th and 16th centuries and the latter part of the 20th century.
Ramzi Touchan of the UA's Laboratory of Tree-Ring Research takes a core from an Altas cedar, also known as Cedrus atlantica, in Morocco. 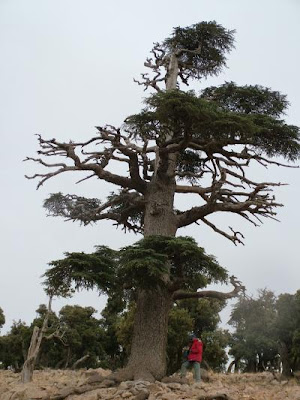 An international research team figured out Northwest Africa's climate history by using the information recorded in tree rings. The oldest trees sampled contain climate data from the medieval period. One tree-ring sample from Morocco dates back to the year 883.
"Water issues in this part of the world are vital," said lead researcher Ramzi Touchan of the University of Arizona. "This is the first regional climate reconstruction that can be used by water resource managers."
In most of North Africa, instruments have been recording weather information for 50 years or less, too short a time to provide the long-term understanding of regional climate needed for resource planning, he said.
The prolonged drought in northwest Africa from 1999-2002 killed many Atlas cedar trees. This photo is from a site in Algeria where tree-ring researcher Ramzi Touchan and his colleagues took samples to develop a drought history of the region. The trees, also known as Cedrus atlantica, are native to the Atlas Mountains of Northwest Africa. 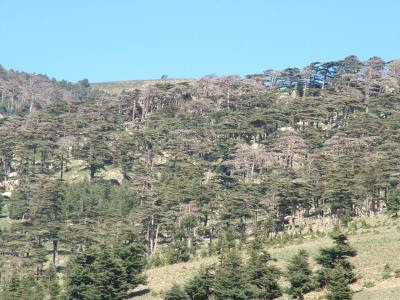 "One of the most important ways to understand the climate variability is to use the proxy record, and one of the most reliable proxy records is tree rings," said Touchan, an associate research professor at UA's Laboratory of Tree-Ring Research.
The team has developed the first systematically sampled network of tree-ring chronologies across Northwest Africa, said co-author David Meko, also of UA's Laboratory of Tree-Ring Research.
The network allowed the researchers to analyze the patterns of past droughts over the whole region, said Meko, a UA associate research professor. The width of the annual growth rings on trees in semi-arid environments is highly correlated with the amount of precipitation.
The team found the region's 20th-century drying trend matches what climate models predict will occur as the climate warms. The research is the first to compare projections from climate models with tree-ring-based reconstructions of the region's past climate.
The region's trees and dead wood needed to do such research are disappearing rapidly from a combination of a massive die-off of trees, logging and population pressures, Touchan said.
"We have a chance to do what we call salvage dendrochronology," Touchan said. These are areas where we need to get this information now or it's going to disappear."
Ramzi Touchan of the UA's Laboratory of Tree-Ring Research teaches students techniques for taking tree-ring cores during his field work in Algeria. 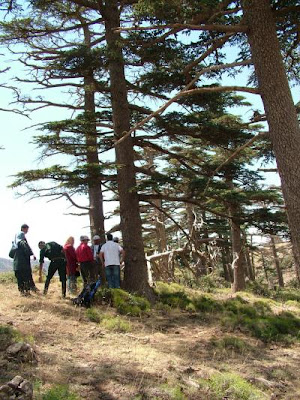 Photo courtesy of R. Touchan, University of Arizona
Pointing to a cross-section of an old tree from Morocco, he said, "This is from 883–and this is from a stump. If we don't take them, they're gone. So this is a real treasure."
The team's paper, "Spatiotemporal drought variability in northwestern Africa over the last nine centuries," is now available online and will be published in a future issue of the journal Climate Dynamics. The National Science Foundation funded the research.
The team sampled several different species of conifer and oak trees, because research indicates that testing several different species from the same region provides a better indicator of regional climate.
The current tree-ring chronology builds on previous work in Northwest Africa by this team and by other researchers. The chronology incorporates samples from at least 20 trees from each of 39 different sites.
Persistent drought was more widespread across Northwest Africa before the year 1500 than for the four centuries following, the researchers found. However, the pattern of widespread regional drought then seems to re-emerge in the late 20th century.
The spatial extent of the new regional tree-ring chronology revealed that drought in Morocco is not driven by the same kinds of oceanic and atmospheric conditions as drought in Algeria and Tunisia.
Drought in Morocco is strongly related to the north/south seesaw of air-pressure anomalies in the North Atlantic Ocean called the North Atlantic Oscillation. However, drought in Morocco is only weakly related to El Nino. By contrast, drought in Algeria and Tunisia appears more linked to a warm tropical Atlantic Ocean.
Touchan hopes to expand the new network's geographic reach to across North Africa, including Libya and additional parts of Algeria.
In addition, he wants to extend the chronology back in time to bridge the gap to archaeological material.
Tree-ring chronologies exist for centuries deep in the past, but they are "floating," meaning that there is no continuous record linking those chronologies to ones that reach back from the present, he said.
"If we can bridge this gap, it will be a discovery for the world," Touchan said.
Touchan and Meko's co-authors are Kevin J. Anchukaitis of Columbia University's Lamont Doherty Earth Observatory in Palisades, N.Y.; Mohamed Sabir of the National School of Forest Engineering in Sale, Morocco; Said Attalah of the University of Ourgla in Algeria; and Ali Aloui of the Institute of Sylvo-Pastoral of Tabarka in Tunisia.
on May 26, 2010