Scientists from NOAA and Texas A&M University–Corpus Christi were astounded to find that seamounts, mountains that rise from the seafloor, rank as some of the most common ocean habitats in the world. Their findings are published in a new study and reverse previous beliefs about the prevalence of seamounts, which are treasure troves of marine biodiversity.
Estimates of the number of seamounts occurring worldwide are high and increasing, largely because of improved remote-sensing capabilities, high estimates put the number of seamounts in the hundreds of thousands from a former estimate in the tens of thousands. 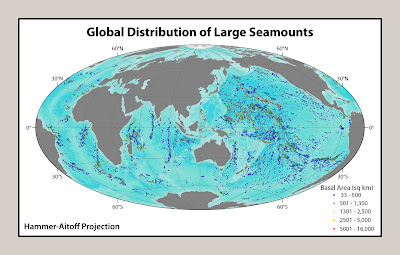 "Unlike beaches or even coral reefs, most people will never see a seamount, but this study shows that they are clearly one of the predominant ecosystems on the planet," said Peter Etnoyer, Ph.D., principal investigator of the study and marine biologist at NOAA's Center for Coastal Environmental Health and Biomolecular Research. "We can only hope that through this study, people begin to realize what a vast unknown the ocean represents, and what a vital role it plays on Earth."
Although researchers have thoroughly explored some 200 seamounts and mapped and sampled a hundred others, this study is the first to estimate that more than 45,000 seamounts dot the ocean floor worldwide — a total of roughly 28.8 million square kilometers or an area larger than the continent of South America. The discovery was made possible using satellite altimetry data that measured incredibly slight changes in the sea surface height that, along with statistical analysis models, indicated the presence of these submerged mountains.
"Seamounts are biodiversity 'hotspots', with higher abundance and variety of life forms than the surrounding seafloor," said Tom Shirley, Ph.D., contributing author of the study and a conservation scientist with the Harte Research Institute at Texas A&M University-Corpus Christi. "In fact, new species are observed or collected on nearly every submersible dive." Two dozen new species of corals and sponges, for example, have been collected from seamounts in the Gulf of Alaska since 2002.
Seamounts not only make up the largest area of ocean habitat, they are also highly productive environments that can serve as habitats for important commercial fish species like orange roughy and sablefish. 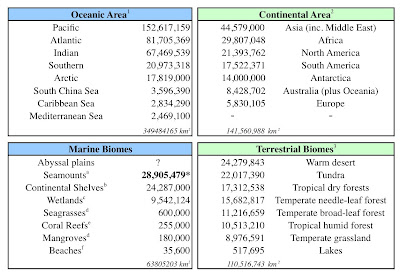 (a) Earle and Glover (2008). (b) World Almanac, 2006. (c) Udvardy (1975). (d) Burke et al. (2001). (e) This study. (f) Darras et al. (1998). (g) Groombridge and Jenkins (2002). (h) Spalding and Grenfell (1977). (i) This study, using a global coastline of 356,000 km (from CIA, 2008) and 0.1-km average beach width. (j) Total basal area of 33,000 hypothetical seamounts 1000–1500 m in relief with height/radius = 0.088 (derived from Wessel, 2001). (k) Total basal area of 11,880 unique seamounts (> 1.5 km in relief) assuming radial symmetry of seamount features. Basal radius estimates were derived from a vertical gravity gradient (Wessel and Lyons, 1997), and used to estimate basal area using the formula for circular area = πr2.
Source: Peter Etnoyer, Ph.D
Contacts and sources:
Keeley Belva
keeley.belva@noaa.gov
301-713-3066
NOAA Headquarters
This research, which is the first-ever comparison of the size of oceanic and land habitats, is featured in the journal Oceanography: http://www.tos.org/oceanography/issues/issue_archive/issue_pdfs/23_1/23-1_etnoyer2.pdf.
NOAA understands and predicts changes in the Earth's environment, from the depths of the ocean to the surface of the sun, and conserves and manages our coastal and marine resources.
Visit NOAA at http://www.noaa.gov
Facebook at  http://www.facebook.com/noaa.lubchenco.
Figures and Tables related to this story http://www.aquanautix.com/seamounts/MediaKit.zip
Media page with more high resolution photos and articles at Oceanography: http://www.tos.org/oceanography/issues/current.html
Seamount Fly-Thru video: http://www.youtube.com/watch?v=fbOzq86vOhI
Online fly-through of Pacific Seamounts in Google Earth 5.0: http://www.aquanautix.com/seamounts/Pacific_Seamounts_Tour.kmz
on April 30, 2010