Pokeberries – the weeds that children smash to stain their cheeks purple-red and that Civil War soldiers used to write letters home – could be the key to spreading solar power across the globe, according to researchers at Wake Forest University's Center for Nanotechnology and Molecular Materials.
Nanotech Center scientists have used the red dye made from pokeberries to coat their efficient and inexpensive fiber-based solar cells. The dye acts as an absorber, helping the cell's tiny fibers trap more sunlight to convert into power.
Pokeberries proliferate even during drought and in rocky, infertile soil. That means residents of rural Africa, for instance, could raise the plants for pennies. Then they could make the dye absorber for the extremely efficient fiber cells and provide energy where power lines don't run, said David Carroll, Ph.D., the center's director.
"They're weeds," Carroll said. "They grow on every continent but Antarctica."
Wake Forest University holds the first patent for fiber-based photovoltaic, or solar, cells, granted by the European Patent Office in November. A spinoff company called FiberCell Inc. has received the license to develop manufacturing methods for the new solar cell.
The fiber cells can produce as much as twice the power that current flat-cell technology can produce. That's because they are composed of millions of tiny, plastic "cans" that trap light until most of it is absorbed. Since the fibers create much more surface area, the fiber solar cells can collect light at any angle – from the time the sun rises until it sets.
To make the cells, the plastic fibers are stamped onto plastic sheets, with the same technology used to attach the tops of soft-drink cans. The absorber – either a polymer or a less-expensive dye – is sprayed on. The plastic makes the cells lightweight and flexible, so a manufacturer could roll them up and ship them cheaply to developing countries – to power a medical clinic, for instance.
Once the primary manufacturer ships the cells, workers at local plants would spray them with the dye and prepare them for installation. Carroll estimates it would cost about $5 million to set up a finishing plant – about $15 million less than it could cost to set up a similar plant for flat cells.
"We could provide the substrate," he said. "If Africa grows the pokeberries, they could take it home.
"It's a low-cost solar cell that can be made to work with local, low-cost agricultural crops like pokeberries and with a means of production that emerging economies can afford."
Wake Forest University's Center for Nanotechnology and Molecular Materials uses revolutionary science to address the pressing needs of human society, from health care to green technologies. It is a shared resource serving academic, industrial and governmental researchers across the region. 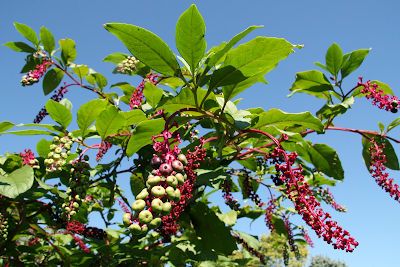