Brookhaven National Laboratory (Upton, NY) scientist Radoslav Adzic has developed transition metal nanostructures coated with a contiguous, conformal submonolayer-to-multilayer noble metal film and its related manufacturing method. The platinum/palladium (Pt/Pd) catalyst increases the fuel cell oxygen reduction reaction (ORR) which results in higher fuel cell power.
The manufacturing process, detailed in U.S. Patent Application 20100099012,  involves the initial formation of suitably sized transition metal or alloy nanostructures which may be nanorods, nanobars, or nanowires. A monolayer of a non-noble metal is deposited onto the surface of the nanostructures by underpotential deposition. This is followed by the galvanic displacement of the non-noble metal by a second metal to yield a conformal coating of a monolayer of the second metal on the surface of the nanostructures. The replacement of atoms of the first metal by atoms of the second metal is an irreversible and spontaneous redox reaction which involves the replacement of a non noble metal by a more noble metal. The process can be controlled and repeated to obtain the desired film coverage. The resulting coated nanostructures provide heightened catalytic activity and can be used as high-performance electrodes in fuel cells.
While significant progress has been made towards understanding the complex kinetics of oxygen reduction, a detailed atomic-level understanding of the reaction pathways resulting in oxygen reduction on platinum (Pt) surfaces has not yet emerged. There is a need to develop an electrocatalyst which minimizes Pt loading while simultaneously maximizing the available catalytically active Pt surface area and improving oxidation reduction reaction (ORR) kinetics. The increase in the ORR rate attainable through incorporation of Pt/Pd nanorods in one or more electrodes will produce an increase in the overall energy conversion efficiency of the fuel cell. Consequently, for a given quantity of fuel, a larger amount of electrical energy will be produced when using Pt/Pd nanorod-based electrodes compared to conventional nanoparticle electrodes.
The electrocatalyst comprises a nanostructured core of a transition metal covered with a contiguous adlayer of a noble metal. The transition metal core preferentially comprises Pd which is covered with an adlayer of Pt. The transition metal nanostructures are preferentially shaped into nanobars, nanorods, or nanowires. The coated nanostructures are formed by a method comprising initially fabricating a substrate having a plurality of transition metal nanostructures. A continuous adlayer of a non-noble metal such as copper (Cu) is then formed on the surface of the nano structures by underpotential deposition (UPD). Immersing the nanostructures in a salt comprising a noble metal results in replacement of the non-noble metal by the noble metal. The method preferentially forms Pd nanobars, nanorods, or nanowires which are conformally coated with a thin layer of Pt atoms.
The manufacturing cycle depicted in FIG. 1 may be repeated any number of times to deposit additional layers of Pt onto the surface of the Pd nanorods to ensure complete coverage. Conversely, less than a monolayer of Cu may be deposited during UPD such that submonolayer coverages of Pt result. The "skin" of Pt atoms will form a continuous conformal coverage across the entire available smooth surface area. FIG. 1 shows a series of images illustrating the underpotential deposition of a Cu adlayer onto a Pd nanorod followed by the galvanic displacement of Cu atoms by Pt; 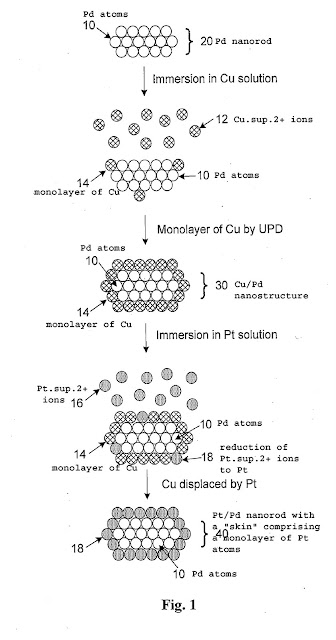 A transmission electron microscopy (TEM) image showing a plurality of Pt-coated Pd nanorods formed using the process described above is provided in FIG. 2A.  An enlarged TEM image which shows a close-up of individual nanorods is provided in FIG. 2B.
FIG. 2A is a transmission electron microscopy image showing an aggregate of Pd nanorods, each of which is covered with an atomically thin layer of Pt. 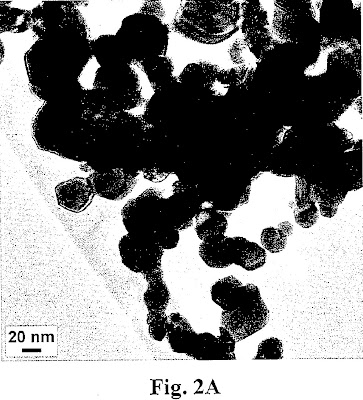 FIG. 2B is an enlarged transmission electron microscopy image of a typical Pd nanorod covered with an atomically thin layer of Pt; 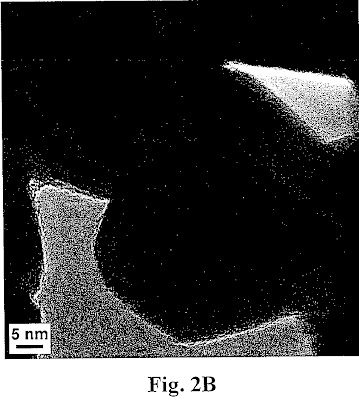 The Pt/Pd nanostructures which are preferably nanobars, nanorods, and nanowires may be used as the cathode in a fuel cell. There are many possible applications which may include hydrogen sensors, charge storage devices, applications which involve corrosive processes, as well as various other types of electrochemical or catalytic devices.
on April 27, 2010